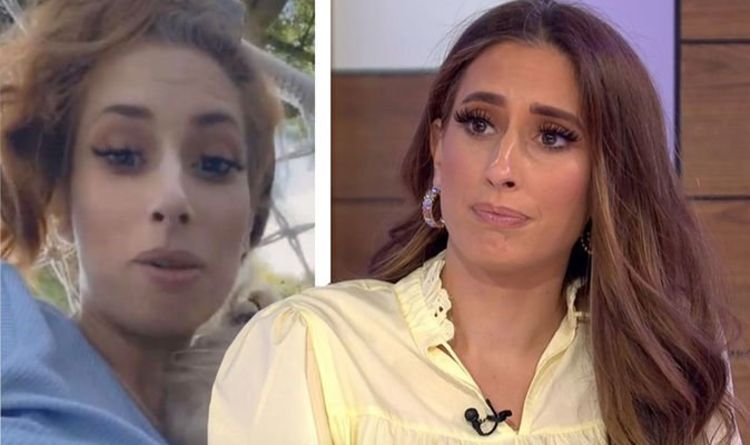 Stacey Solomon, 31, told her fans that she would be taking some time away from her phone for the next few days in order to spend time with her family and help with her mental health. The Loose Women star admitted she had been suffering with anxiety and feeling “so strange”. She made the announcement on her Instagram in view of her 4.4 million followers on Saturday, while sharing a photo of her garden in bloom.

“Goodnight… I hope you’re all ok. I feel so strange still.

She went on: “I hope you have a lovely Sunday and Monday. You deserve all the happiness in the world. Never forget it.”

Stacey ended the message by saying: “Love you to the moon and back…”

Inundated with messages from her loyal fans, the presenter made a brief return to share her gratitude for their well wishes, saying: “Was about to write in my brain junk bin in my book.

A fourth posted: “Rest up, brain dump, be kind to yourself… we will be here for you when you are ready.”

On Friday, Stacey and her ITV co-stars found themselves at loggerheads during a tense discussion about discussing BBC News anchor Shaun Ley’s decision to wear shorts live on-air.

The star and panellists Kaye Adams, Jane Moore, and Carol McGiffin, discussed Shaun, who came under fire after it emerged he was wearing shorts while fronting the 11pm news on Wednesday, the hottest day of the year.

In keeping with BBC’s regular dress, Shaun’s upper half was smartly dressed, wearing a white shirt with a blue tie, paired with a black blazer.

However, a camera shot of the entire studio left Shaun’s lower half exposed, showcasing his bare legs while wearing a pair of shorts and a pair of dock shoes.

Many viewers instantly took to social media after the awkward moment to discuss Shaun’s attire, with Stacey leaping to his defence.

She explained his wardrobe choice shouldn’t matter if it doesn’t affect anyone’s ability to work, saying: “Regardless of what you wear if somebody else walks in and goes, ‘What you’re wearing makes me feel like you’re less able to do your job’, that’s their problem.”

Moments after, Kaye interjected, adding: “Yeah but if your job is to do X, Y and Z and what you’re wearing makes you less credible, then that is a problem, isn’t it?”

Clearly enraged by Kaye’s comment, Stacey quipped: “But why does what you’re wearing make you less credible?”

Carol, who is known for not holding back, exclaimed: “Well it’s a distraction, isn’t it?!”

Stacey instantly added: “But why does wearing something make you more or less credible? It’s weird!”

Acknowledging the awkward camera moment, Carol responded: “But they’re showing the fact the guy’s wearing shorts reading the news with a jacket and tie on, and it just looks ridiculous.”

“If the shorts were tailored would that make him more credible?” joked Stacey.