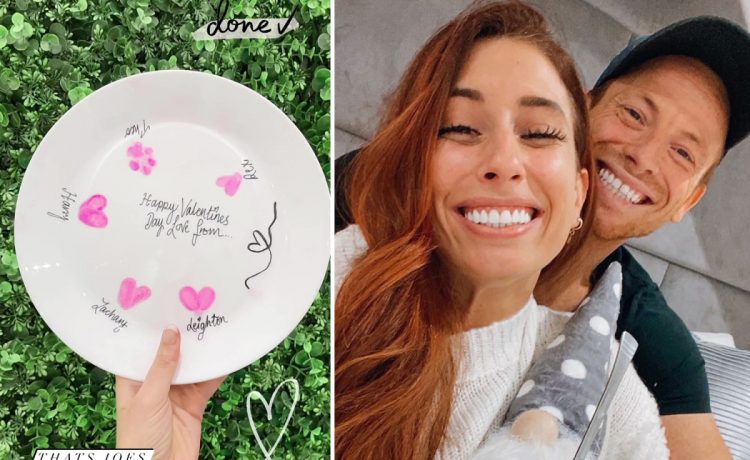 The 31-year-old Loose Woman star enlisted the help of her family to make Joe the perfect gift.

The star whipped out her arts and crafts to create a customised dinner plate.

The thoughtful gift had a sweet personalised stamp from each family member.

The couples adorable pet pooch Theo also made his mark by adding his paw print to the plate.

The family added their names along with the message Happy Valentines Day.

Stacey showed her fans how she created the plate by applying some pet friendly ink and then pressing her toes onto the place to create the creative gift.

In one clip she joked: “I decided to add myself to the plate because I felt a little bit left out.”

If you’ve forgotten to get a Valentine’s Day gift for someone special, then fear not.

You can recreate Stacey’s gift for just £23, the thrifty mum shared her bargain buys on social media.

Stacey is clearly wants to show how much she loves her beau as it’s their first Valentine’s Day since they became engaged.

Her long-time boyfriend proposed with a huge diamond ring on a walk in the woods on Christmas Eve.

Joe popped the question while on a walk in the woods opposite their house with her two sons Leighton, eight, Zachary, 12, and their child Rex, one.

The star wrote: “He asked me to marry him and after crying for what felt like a very long time… I said yes” adding emojis of a heart and diamond ring.

Stacey has long hinted that she wanted to marry Joe, who she has been dating since 2016 after they met in the I’m A Celebrity jungle.

However, he has always warned that it will come as a surprise to her when he does.

He told OK! magazine in October: “She’s not going to expect it. It’s going to take her from the sides.”

Stacey and Joe have one child together – baby boy Rex Toby Francis Swash, who was born in May last year.

Loose Women panellist Stacey had her first son Zachary, whose dad is Dean Cox, as a young mother at 17.