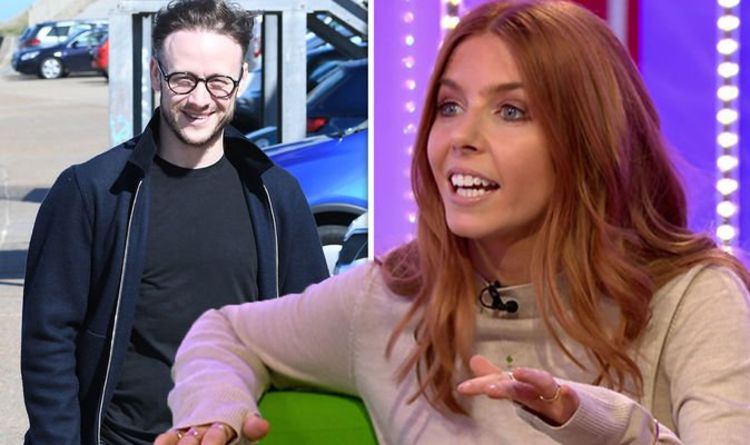 Stacey Dooley, 32, took to her Instagram stories to share a behind-the-scenes clip at the BBC studios. In view of her 730,000 followers, the documentary-maker panned the camera around the dance floor as Strictly Come Dancing professionals showcased their moves. Walking ahead of the presenter was her boyfriend Kevin Clifton, 36, before he turned to face the camera. The Grimsby-born Latin dance champion couldn’t contain his happiness as he looked at Stacey with a big grin on his face.

The short video clip comes after the journalist confirmed her return to the show ahead of the new series, earlier this week.

It is a Strictly tradition that the previous year’s winner comes back for the launch show.

However, Joe McFadden, who won the series in 2017, did not return for the launch of the 2018 series.

The small-screen star teased her comeback appearance when she shared a snap of herself dolled up in a glamorous dress.

She could be seen getting her hair sprayed backstage.

Her boyfriend was one of the first to reply, as he added a flexed muscled arm emoji.

She also shared a snap alongside Kevin with the caption: “We coming back to launch the new series… see you there.”

Stacey confirmed her relationship with Kevin last month, following rumours they had been dating after the former split from her ex-boyfriend, Sam Tuckknott, earlier this year.

READ  Nadia Sawalha feud: Inside the ‘toxic’ and ‘stormy’ relationship with sister Julia

In an interview with The Guardian, she divulged: “Kev and I have agreed not to go into too much detail about our private lives because you can’t really indulge that and then ask for privacy.

“That’s why we’ve turned down interviews that have offered us tens of thousands of pounds.”

She went on: “What I am happy to say is Kev’s amazing, I’m happy, life happens, I’ve got an amazing career and I’m very lucky.”

Strictly Come Dancing returns to BBC One on September 7.