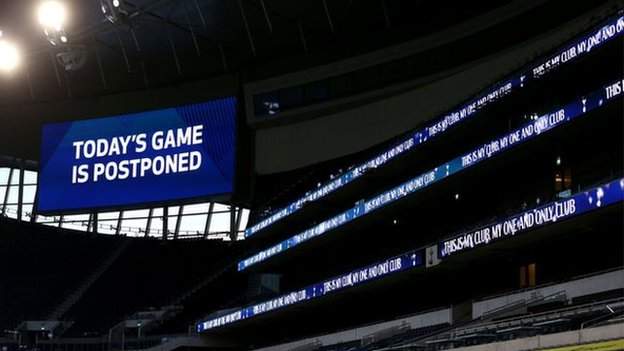 Tottenham will play Fulham on Wednesday in a fixture reshuffle after Spurs’ Premier League match at Aston Villa was postponed because of coronavirus cases in the Villa camp.

Villa, who were due to host Everton on Saturday, face the Toffees on Sunday under the revised fixture list.

Fulham’s game at Tottenham was originally scheduled for 30 December.

But it was postponed at short notice because of a coronavirus outbreak at Fulham.

A Premier League statement said Villa had requested to rearrange the Spurs game.

“Due to the number of players and staff who have either tested positive for Covid-19 or have been placed in isolation by the club, the Premier League had no other option than to reschedule the game,” it said.

Southampton v Leeds could be postponed

Southampton’s Premier League match against Leeds on 20 January may be postponed to allow Saints’ FA Cup tie with Shrewsbury to go ahead.

The third-round encounter was called off on Saturday as Shrewsbury were unable to field a team because of the number of coronavirus cases in their squad.

Unlike Derby and Aston Villa, who encountered similar issues, Shrewsbury were not in a position to select a squad of 14 players from their youth teams.

The FA is still to announce what will happen with the game.

However, rather than kick Shrewsbury out of the tournament, one option being discussed is for Southampton’s match at Elland Road, due to take place immediately before the fourth round, to be moved to make room for the cup game to be played.

Villa boss Dean Smith and his first-team squad are isolating and their training ground has been closed after a number of positive tests at the club.

They used under-23 and under-18 players in Friday’s FA Cup loss to Liverpool.

However, it was felt unfair to ask Villa to follow the same procedure in a Premier League game because it would affect the competitive balance of the competition.

The matter was complicated further by the fact two of those games are against Fulham, who Spurs were due to meet at Craven Cottage in the last week of April, when the EFL Cup final is now due to take place.

Fulham have a Premier League match against Manchester United scheduled for 20 January, the second week of this month’s split midweek programme. Villa are due to play at Manchester City that night.

There are clear issues with the fixture switch for Fulham boss Scott Parker, whose side had to play extra time against QPR on Saturday and were expecting a free week.

However, there is a feeling at the Premier League that clubs accepted at the start of the season some inconveniences would have to be overcome for the campaign to continue.

It is understood Fulham were not informed of this situation until after Saturday’s FA Cup victory against QPR.

Had Parker known, he might have altered his team selection for the game given Fulham’s training ground has just been reopened and many of his senior players had only just returned to full training.