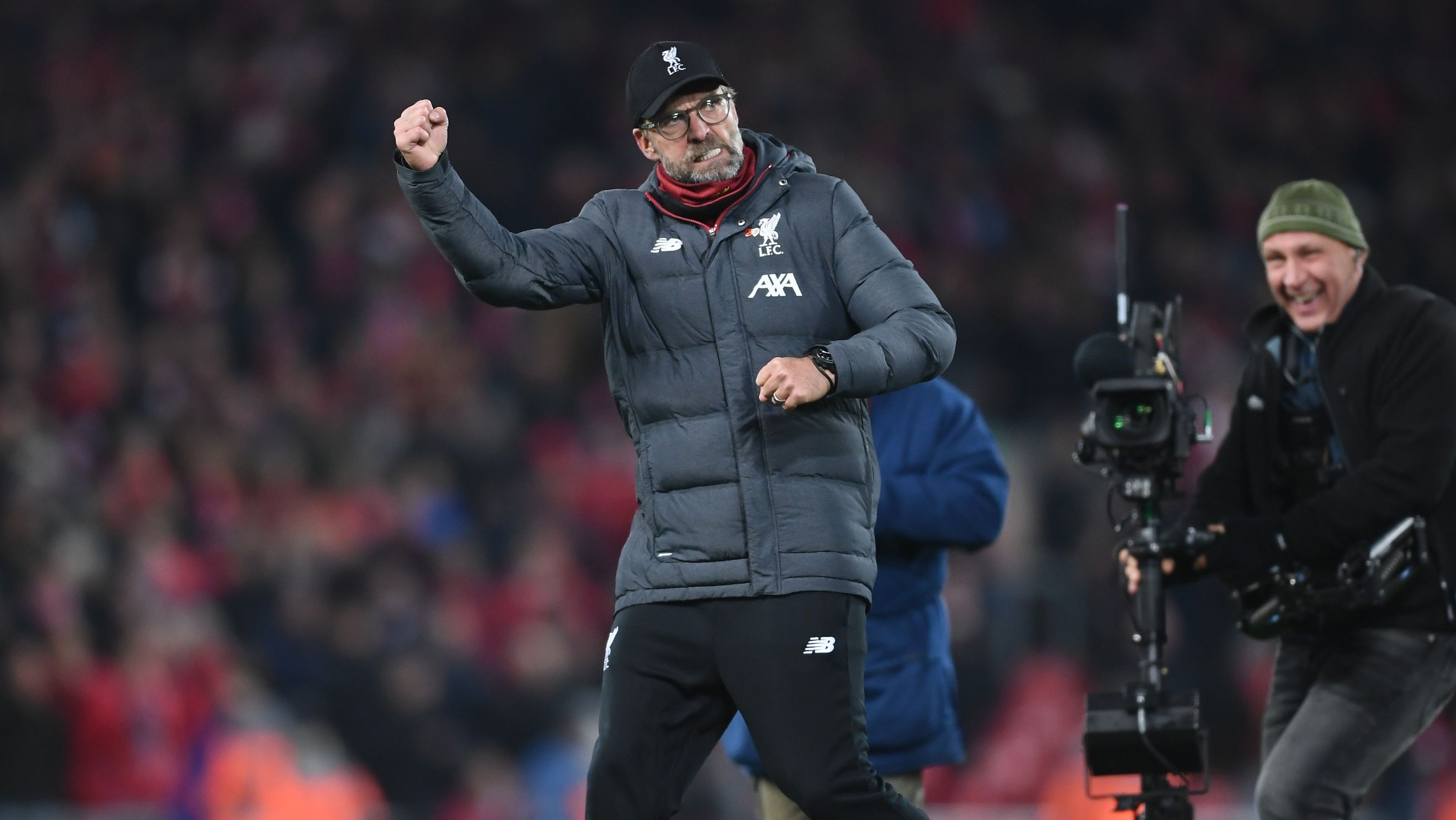 Liverpool took a giant step towards their first title for 30 years as they beat defending Premier League champions Manchester City 3-1 at Anfield to open up an eight-point gap at the top of the table.

Goals from Fabinho and Mo Salah in the first half and Sadio Mane early in the second secured Liverpool the points, although Bernardo Silva pulled one back for City at the end, to set up a nervy climax.

But City boss Pep Guardiola was left fuming after his team had two penalty shouts against Liverpool defender Trent Alexander-Arnold turned down and at the end of the game he sarcastically “thanked” referee Michael Oliver.

Liverpool boss Jurgen Klopp must now try and keep his players an fans’ feet on the ground. “Nothing will be taken for granted – but this is now Liverpool’s title to lose,” says Phil McNulty of the BBC. “If the Reds do not win it this season, given their form, focus and current advantage, they will never forgive themselves. Yes, it is only November, but only one team can deny Liverpool from here: themselves.”

Manchester United produced their “best performance of the season” according to manager Ole Gunnar Solksjaer as they overcame Brighton 3-1 at Old Trafford on Sunday. The goals came from Marcus Rashford, a Davy Propper own goal and Andreas Pereira and lifted United to seventh in the table.

“This was as entertaining a Manchester United display as there has been under Ole Gunnar Solskjaer,” says The Guardian. “There may have been a worrying weakness under the high ball and regarding United’s ruthlessness but, really, this was a convincing exhibition of the Norwegian’s blueprint for his developing side.”

3. Emery on the brink

Former Barcelona coach Luis Enrique has emerged as a candidate to take over at Arsenal if the Gunners decide to get rid of Unai Emery, whose team have not won a league match for a month. Arsenal were beaten by Leicester on Saturday and are now eight pints adrift of Champions League qualification.

There is increasingly vocal unrest among fans, and there are reports that Enrique has been approached as a potential replacement. However, The Times says: “The club are reluctant to sack Emery before a planned review of his position this summer when there is understood to be a break clause in his three-year contract. There are no credible alternatives in the short term but there remains admiration for Mikel Arteta, their former midfielder who is assistant coach at Manchester City.”

Another under pressure manager is Phil Neville after the England Lionesses lost 2-1 to Germany in a friendly at Wembley. England have won only one of their last seven matches and Neville admitted “the results are not good enough,” after Saturday’s defeat. “One win in seven is totally unacceptable. I’ve got to take responsibility for those results,” he added.

Neville led England to fourth place at the World Cup this year and his contract runs until the end of 2021, which comes after next summer’s Olympics and a home European Championship.

Cristiano Ronaldo’s future at Juventus could be in doubt after the Portuguese superstar reacted badly to being substituted for the second game in a row.

“Juventus stayed top of Serie A with a 1-0 win over AC Milan thanks to Paulo Dybala’s fine strike on Sunday after Cristiano Ronaldo was substituted for the second game in a row and walked straight down the tunnel, clearly unhappy at the decision,” says Mail Online.

“Despite producing a lacklustre display, Ronaldo gave coach Maurizio Sarri a dirty look, muttered something under his breath and walked straight down the tunnel. Sky Sport Italia later reported that Ronaldo left the stadium before the game had even finished.”

Neil Robertson beat Judd Trump 10-9 in the final of snooker’s Champion of Champions tournament in Coventry, describing it as the “best match I’ve ever been involved in” after claiming the £150,000 prize.

“Robertson led the world number one 5-4 at the end of the afternoon session. The players were then locked at 8-8 when Trump got a snooker he needed and cleared up from the blue to go 9-8 up,” reports the BBC.

“Robertson needed a snooker in the next and got it before potting a re-spotted black to take the match into a decider, which he won with a 137 break.”

7. Federer slips up at ATP Finals

Roger Federer slipped up against Dominic Thiem in his opening match at the ATP Finals, but Novak Djokovic made a winning start against Matteo Berrettini.

The result leaves Federer under pressure in the tournament and sets up a mouthwatering clash with Djokovic later in the week.

“The 38-year-old Swiss, bidding for his seventh title at the event but his first since 2011, struggled to handle Thiem’s aggressive game as he went down 7-5 7-5,” says Reuters. “Only once in 16 previous appearances has Federer failed to survive the group phase, in 2008, and to avoid a repeat he will have to beat Italian Matteo Berrettini on Tuesday and most probably Novak Djokovic on Thursday.

“Djokovic, aiming to claw back the year-end number one ranking from Rafael Nadal, destroyed debutant Berrettini 6-2 6-1 in the day’s opening singles match at the O2 Arena.”

8. England beat NZ in another thriller

England and New Zealand rekindled memories of the World Cup final in Auckland as their T20 series ended with the drama of a super over, and once again it was England who emerged victorious.

In a game shortened to 11 over a side, New Zealand, batting first, set the tone with an explosive start as Martin Guptill smashed 50 off 20 balls. There was more to come as the home side posted 146-5.

England started badly, recovered through Jonny Bairstow and Sam Curran, and eventually finished on the same score as Chris Jordan took 12 off the final over.

In the super over Bairstow and Eoin Morgan took 17 runs off Tim Southee and Jordan, who was tossed the ball for England, held his nerve to restrict New Zealand to eight.

9. Bristol top after comeback against Exeter

Bristol went top of the Premiership after a remarkable comeback against Exeter Chiefs at Sandy Park on Sunday. Trailing 17-0 at half time, Bristol won the match in overtime when Dan Thomas touched down with the clock in the red to secure a 20-17 victory.

On Saturday Bath inflicted a first defeat of the season on Northampton, despite conceding a try in the opening minute and having Alex Brew sent off early in the second half.

Meanwhile, Saracens won their first game since being punished for breaching the Premiership salary cap. The champions were jeered by Gloucester fans waving fake £50 notes, but had the last laugh running out 21-12 winners at Kinsholm.

Hatton, Matthias Schwab, Kurt Kitayama, Victor Perez, Benjamin Hebert and Erik van Rooyen all finished on 20 under par to set up the six-way play-off, which was only the third in European Tour history.

It took four extra holes for Hatton see off his rivals, by which time the floodlights had been turned on. Victory came when his only remaining rival Schwab missed a putt for par.