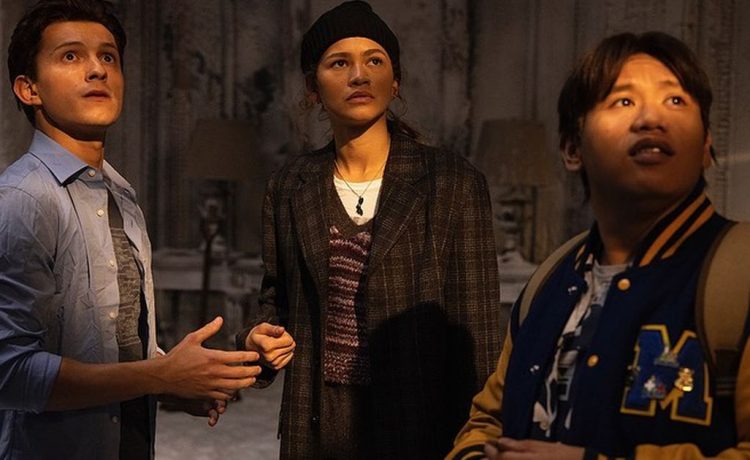 Spider-Man 3 stars Tom Holland, Zendaya and Jacob Batalon have pranked fans regarding the title of the upcoming film.

The three actors each took to their social media accounts to supposedly share the title for the new film.

Series star Tom Holland shared a photo on Instagram featuring himself as Spider-Man/Peter Parker, Zendaya as his girlfriend MJ, and Jacob Batalon as his best friend Ned Leeds.

He then shared a title card for the film reading ‘Spider-Man: Phone Home’.

Tom penned alongside the image: “So excited to announce the new Spider-Man title. Can’t wait for you lot to see what we have been up to. Love from Atlanta.”

Meanwhile, Jacob posted: “Woah woah.. wait.. why is your different?!?”

On Jacob’s Instagram, he also shared a different image of the trio.

He then shared the title as ‘Spider-Man: Home-Wrecker’.

The actor captioned the post: “We’re so excited to share the TITLE of our new movie!! Swipe right for the big reveal!!

“Also enjoy this exclusive still from the movie, just an extra gift from us [kiss emoji].”

On Zendaya’s Instagram, she too shared a snap of the three cast members on the film, before sharing the title as ‘Spider-Man: Home Slice’.

She captioned her post: “So excited to announce the new Spider-Man title. So proud of this one…FOS is back!”

Tom commented on hers: “Right… I have had enough of this! I’m calling [director Jon Watts].”

Jacob penned: “Okay now this is just ridiculous… we have to talk to Jon!!”

The sequel’s title was finally confirmed to be Spider-Man: No Way Home following a sketch video featuring the three stars.

In addition to these returning stars are Oscar winner Marisa Tomei as Peter’s aunt May Parker and Tony Revolori as Peter’s schoolmate Eugene ‘Flash’ Thompson.

Elsewhere, Benedict Cumberbatch is also due to star in the film as his mystical superhero Doctor Stephen Strange, taking on a mentor role to Peter akin to Iron Man in Spider-Man: Homecoming and Nick Fury in Spider-Man: Far From Home.

However, the most fascinating castings include returning stars from the two previous Spider-Man film franchises.

Jamie Foxx will reprise his role as the villainous Electro/Max Dillon from The Amazing Spider-Man 2, while Alfred Molina is due to return as Doctor Otto Octavius from Spider-Man 2.

Elsewhere, ComicBook.com has reported that Charlie Cox has wrapped filming for the film as he reprises his role as superhero Matt Murdock from the Daredevil series that ran for three seasons on Netflix.

There have also been rampant rumours of returns for both Tobey Maguire and Andrew Garfield as the two previous incarnations of Peter Parker in live-action films, with Collider reporting their comebacks.

The report also suggested returns for Kirsten Dunst as Mary Jane Watson from the Maguire films by director Sam Raimi and Emma Stone as Gwen Stacy from the Garfield films from director Marc Webb.

However, speaking to Esquire, Tom Holland denied that there would be returns for Maguire and Garfield, saying: “No, no, they will not be appearing in this film. Unless they have hidden the most massive piece of information from me, which I think is too big of a secret for them to keep from me.

“But as of yet, no. It’ll be a continuation of the Spider-Man movies that we’ve been making.”

We’ll have to wait and see if he is telling the truth!

Fans have been anticipating a multiverse storyline akin to the hit animated film Spider-Man: Into the Spider-Verse, which is only increased by the third film’s confirmed connections to the 2022 film Doctor Strange in the Multiverse of Madness.

What would you like the third Spider-Man film to be called? Let us know in the comments below.