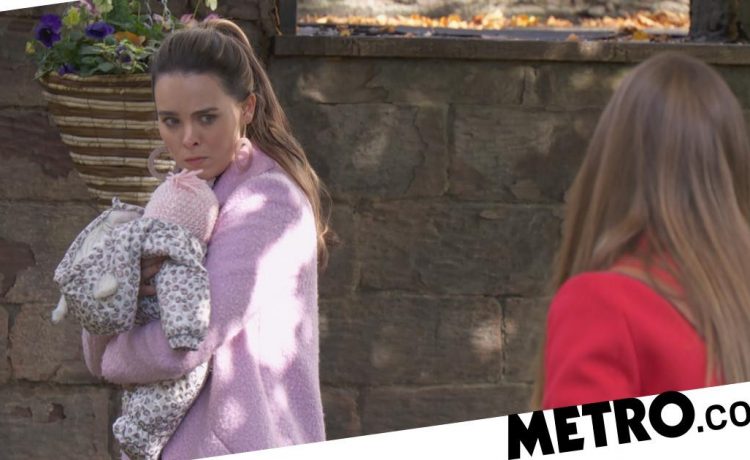 After the birth of Liberty Savage’s (Jessamy Stoddart) child in Hollyoaks, the new mother started viewing her family as a threat, thinking their motives weren’t in their best interests when they tried to get her the help she so desperately needed.

Watching the storyline unfold was bittersweet because I felt dread and fear for Liberty, as I know firsthand what she was going through.

Being unable to trust anyone is such an accurate portrayal of postpartum psychosis (PP) and as someone who was plunged headfirst into the chaos and confusion back in 2018, hearing about Liberty’s storyline in Hollyoaks was very much a big ‘yes’ moment for me – finally attention was being drawn to this rarely talked of mental illness.

Postpartum psychosis is a severe maternal mental illness that can occur completely out of the blue. While a history of bipolar can mean you are more susceptible to PP, it can also affect many women with no prior mental health problems at all.

PP impacts about one to two in every 1000 people who give birth and is always considered a medical emergency.

Its symptoms include: seeing and hearing things that others can’t; strange beliefs that aren’t based in reality; mania, depression or severe changes in mood; insomnia; racing thoughts; anxiety, and sometimes – as in my case – suicidal thoughts.

So when a major soap on TV has a storyline that’s central theme is built around the very thing that tried to kill you, it is always a mixed feeling.

I felt worried I’d be triggered by the build-up, adverts or texts from distant relatives. But I also felt a glorious overriding sensation that a story like mine will be told to millions across the country.

After the birth of my son in 2018, I was hit with PP. Three weeks after the birth, it came out of nowhere and completely turned my life upside down – I had never experienced a mental illness before.

Following an emergency C-section, I didn’t feel like ‘myself’ but I didn’t really expect to; I’d had a horribly traumatic labour and not slept for a week.

Once I got home, I thought everything would be OK but things totally spiralled. The smallest of tasks seemed to overwhelm me but more than that, I had a constant underscore low level hum of terror – a fear that something bad was going to happen.

Within days, my racing thoughts became voices telling me I was a bad mum, my seeds of doubt became paranoid conspiracies and delusions that my partner was planning to steal my son, that the teddy bear had CCTV in its eyes and that I should take my own life.

I lost all faith in myself and totally withdrew. I am just so thankful I asked for help. I was scared of myself and what I’d do and so my partner and sister drove me to hospital in the middle of the night and I was treated immediately.

Waking up on my first Mother’s Day (you couldn’t make it up, I know) in a psychiatric ward – separated from my baby – was a devastating shock for my family. That day was the lowest point of my life.

I was completely afraid, unsure if I was in a psychiatric ward, prison, hell or the lead in some sort of zombie nightmare film. I didn’t think I had any life outside of that room.

Any reassurance I got from family and friends would pacify me momentarily before I believed once again it was all part of a conspiracy. But honestly, there was a sense of relief too – that I no longer had to pretend I was fine. The shame seemed to be extinguished in that moment.

There is a silver lining to rock bottom, which is that the only way is up. Having my son saw me hospitalised but it was ultimately the love for my son that got me out too.

Recovery is not linear. It’s like a giant painful game of snakes and ladders, you think you’ve reached the end and then out of nowhere you slide down a big fat snake to the start again – but you’re never back at that rock bottom place.

After the psychosis left me I sank into a deep depression, which I’ve also never experienced before, but that gave me the guts to write a blog piece about what I was going through.

The charity Action on Postpartum Psychosis reached out to me after reading my entry – at this point I barely wanted to leave the house. I was so nervous to meet them, so my sister came along with me, which is why Liberty’s story really moved me.

It was so empowering and comforting meeting the women there that had all been through similar wild and terrifying experiences, there was an immediate warmth and understanding.

I decided I was going to be as active in my recovery as I possibly could; talking, sharing and helping others really helped, reminding myself what positive things have come from this experience.

I also believe that writing my memoir saved my life. Removing shame and guilt really kept me on my recovery path.

That’s why Liberty’s story was so important to see. Although things are getting better, psychosis is still far too often stigmatised in the media, portraying those experiencing it as violent or scary, which is very rarely the case. If anything, the sufferer is the one who is scared.

So it was good to see Liberty portrayed more accurately, as someone who was vulnerable and confused. Somebody who you can really empathise with and feel for.

I was delighted even more when Liberty’s story began to explore the role of peer support in recovery – with her doctor suggesting she join an online group.

This is because – as much as I needed medication, hospitalisation, therapy and my wonderfully-loving husband – having someone to chat to who totally and truly gets it is a vital piece of the recovery jigsaw.

I have been somewhere I can’t unsee and felt things I can’t unfeel. The peer community at Action on Postpartum Psychosis is a family in its own right – we are bound and we get each other.

This isn’t work for me, it is wrapped up in my heart – my partner, parents, siblings, partner’s family, friends and of course, beautiful son. We were all lost inside a hurricane that we didn’t know even existed.

So a mainstream TV show like Hollyoaks giving our illness a name, stage and platform is a very big moment for us.

It feels like the mask has finally been ripped off the face of the illness for all to see and it’s confirmation that you didn’t make it up, it wasn’t your fault, you’re not weird or broken or a bad person and it can happen to anybody.

It really feels like the show’s somehow managed to bottle this intangible, secret beast that thrives in a culture of shame and silence and now it’s on TV for the world to see.

And, importantly, to remind us that the illness is treatable, you are not alone, and life certainly isn’t over.

To find out more about Action on Postpartum Psychosis, including information about postpartum psychosis and peer support for women and their families, visit their website here.

You can read more of Laura’s story in her memoir, What Have I Done?


MORE : How to support a loved one who has postpartum depression


MORE : Paloma Faith wondered if she’d ever be happy again at height of postpartum depression

Includes exclusive content, spoilers and interviews before they’re seen on the site. Find out more »

READ  Kiss left on window by girl, 4, who died suddenly preserved by forensic expert
Share on FacebookShare on TwitterShare on PinterestShare on Reddit
newsgrooveMarch 24, 2021