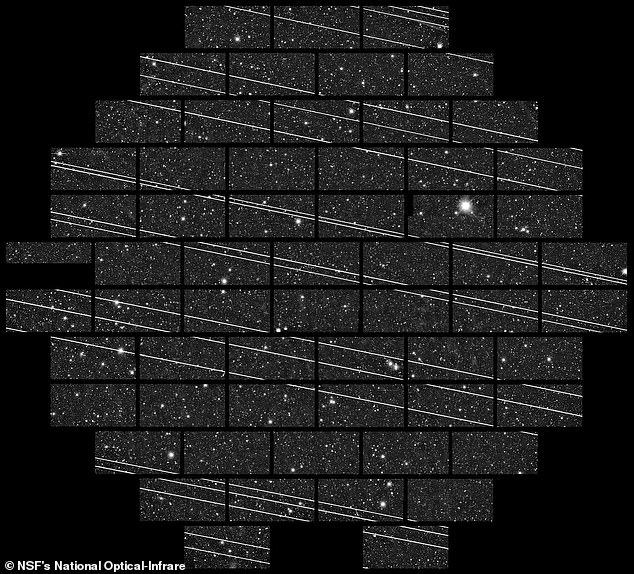 Constellations of thousands of satellites from companies like SpaceX and OneWeb could hamper the ability of astronomers to spot ‘dangerous asteroids’, study warns.

The European Southern Observatory (ESO) study examined the impact satellites from the likes of Amazon, SpaceX and OneWeb would have on astronomy.

Companies plan to launch thousands of communications satellites into orbit in the next few years in order to provide a satellite broadband internet service.

Some of these are visible in the sky and astronomers from the ESO say the worst affected telescopes will be those doing wide-field surveys of the night sky.

These telescope arrays scan large parts of the sky very quickly and so are crucial in spotting supernovae and potentially dangerous asteroids.

ESO says a good step would be for the industry to ensure they darken the satellites before launching them into orbit – something SpaceX said it would do.

Astronomers have been raising concerns about the impact of mega-constellations of satellites on scientific research since they were first proposed.

So far SpaceX have about 240 Starlink Satellites in orbit but plan to have thousands over the next few years. OneWeb and others also plan to launch a similar number.

When conducting the study ESO researchers worked on there being over 26,000 broadband satellites orbiting the Earth.

The study found that wide-field surveys – particularly those done with large telescopes such as the US National Science Foundation’s Vera C Rubin Observatory – would be most affected by the satellites.

Up to half of exposures with the Rubin Observatory would be ‘severely affected’, depending on the time of year and the time of night, the study found.

‘Mitigation techniques that could be applied on ESO telescopes would not work for this observatory although other strategies are being actively explored.’ 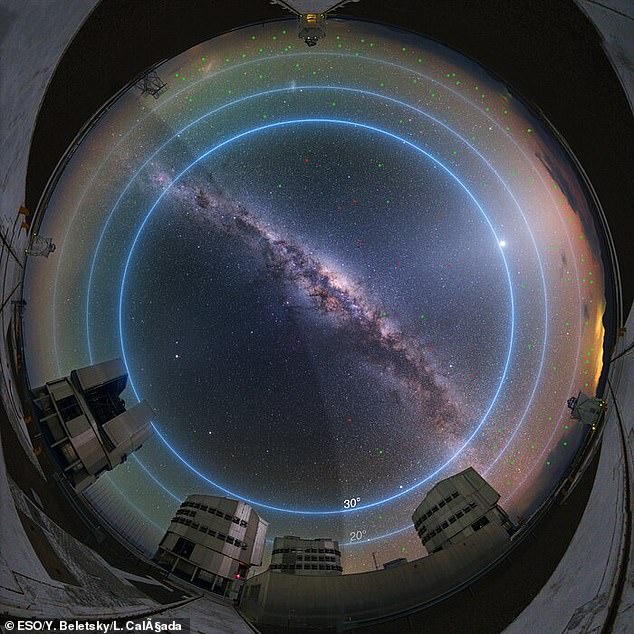 This image shows the night sky at ESO’s Paranal Observatory around twilight, about 90 minutes before sunrise. The blue lines mark degrees of elevation above the horizon and once all constellation satellites launch dozens of them could be visible in this view

Wide-field survey telescopes have been listed as a top priority by funding bodies and astronomers due to their unique capability to generate very large data sets and to find observation targets for many other observatories.

The researchers discovered that large telescopes like ESO’s Very Large Telescope and the upcoming Extremely Large Telescope will be ‘moderately affected’ by the constellations under development.

The effect is more pronounced for long exposures from the telescopes – with up to 3 per cent of all exposures during twilight ruined by the constellations.

Shorter exposures would be less impacted, with fewer than 0.5 per cent of observations of this type affected.

Observations conducted at other times during the night would also be less affected, as the satellites would be in the shadow of the Earth and therefore not illuminated.

Depending on the science case, the impacts could be lessened by making changes to the operating schedules of telescopes, though these changes come at a cost.

‘We will lose some telescope time due to the satellites crossing the field of view,’ ESO astronomer Olivier Hainaut told BBC News.

‘For us, for ESO telescopes, this is something that we can mitigate by scheduling, and by ‘closing the shutter’ when they pass overhead.’

Further studies are required to fully understand the scientific implications of this loss of observational data and complexities in their analysis, ESO says.

Professional and amateur astronomers alike have also raised concerns about how satellite mega-constellations could impact the pristine views of the night sky.

The study shows that about 1,600 satellites from the constellations will be above the horizon of an observatory at mid-latitude, most of which will be low in the sky – within 30 degrees of the horizon.

Above this – the part of the sky where most astronomical observations take place – there will be about 250 constellation satellites at any given time.

While they are all illuminated by the Sun at sunset and sunrise, more and more get into the shadow of the Earth toward the middle of the night.

‘Once you crunch the numbers, the numbers are not as bad as what some people feared,’ Dr Hainaut told BBC News.

‘People said ‘oh no, there’ll be 40,000 bright satellites in the sky? No, there won’t be, simply because most of these satellites will be below the horizon, and then most of the others will be in the shadow of the Earth. That’s the first bit of good news.

‘The second bit of good news is that the space industry, and specifically Space X and OneWeb are talking to us. They are really listening.’ 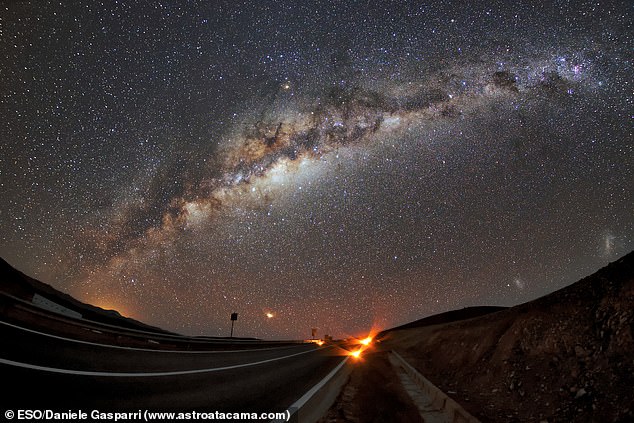 The Milky Way, our own galaxy, stretches across the sky over Paranal, the site of ESO’s Very Large Telescope. Paranal has about 300 clear nights per year but this could be hampered with thousands of satellites in low Earth orbit

Overall, these new satellite constellations would about double the number of satellites visible in the night sky to the naked eye.

These numbers do not include the trains of satellites visible immediately after launch and before they reach their final position in orbit.

Whilst spectacular and bright, they are short lived and visible only briefly after sunset or before sunrise over a limited area on Earth.

Satellite constellations will also have an impact on radio, millimetre and submillimetre observatories, including the Atacama Large Millimeter/submillimeter Array (ALMA) and the Atacama Pathfinder Experiment (APEX).

They didn’t go into the specifics of the impact it would have on these telescopes as part of this study but do plan to examine it in future research.

A spokesperson for the American Astronomical Association said they wanted to find a way to work with SpaceX and others without ‘giving up the night sky’. 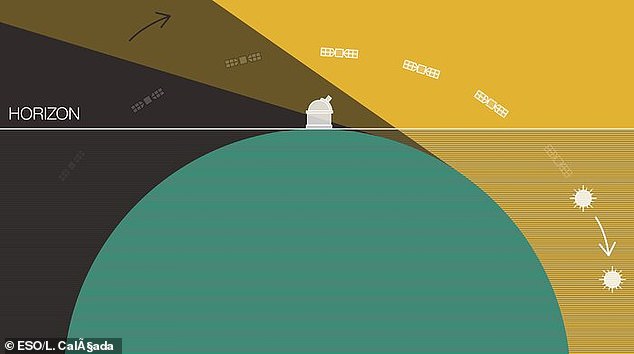 This 2D diagram illustrates that an observer at mid-latitude would see only a fraction of the constellation satellites orbiting the Earth. To be visible, satellites need to be above the observer’s horizon and be illuminated by the Sun

‘The goal of Starlink is to provide worldwide internet service, an aspiration we do not want to impede, but this requires one to two orders of magnitude more low Earth orbiting satellites (LEOs) than currently exist,’ they said.

Observatories around the world are taking measures to ‘raise awareness of this issue’ with the likes of the United Nations Committee for the Peaceful Uses of Outer Space and the European Committee on Radio Astronomy Frequencies.

This is alongside work with the space companies to find practical solutions.

ESO says it is important to ‘safeguard the large-scale investments made in cutting-edge ground-based astronomy facilities.’

Various agencies have called for the development of regulatory framework to ensure the ‘harmonious coexistence’ of technological advances in low Earth orbit with the use of ground based observatories.

The American Astronomical Society said: ‘We do not want to give up access to optical observations from the ground. 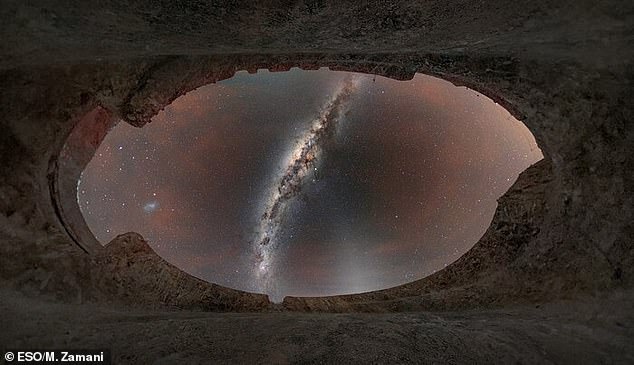 This image shows the night sky above the construction site of ESO’s Extremely Large Telescope, which is planned to start operating in late 2025. Unlike other telescopes it will only be ‘moderately affected’ by the constellations currently under development

‘Our group’s task is to find a path forward that accommodates both uses of the sky.’

The International Astronomical Union (IAU) said there are no internationally agreed rules or guidelines on the brightness of orbiting manmade objects.

Until now this wasn’t a priority as there weren’t enough objects in the right orbit to make a notable difference – but the likes of SpaceX and OneWeb will put more up in a short time than have been launched to date in over 50 years of spaceflight.

The IAU said that technological progress is only made possible by parallel advances in scientific knowledge.

‘Satellites would neither operate nor properly communicate without essential contributions from astronomy and physics,’ an IAU spokesperson said.

‘It is in everybody’s interest to preserve and support the progress of fundamental science such as astronomy, celestial mechanics, orbital dynamics and relativity.’

The findings have been published in the journal Astronomy and Astrophysics.

WHAT IS STARLINK AND WHAT ARE ITS GOALS?

Elon Musk’s SpaceX has launched the fourth batch of its ‘Starlink’ space internet satellites – taking the total to 240.