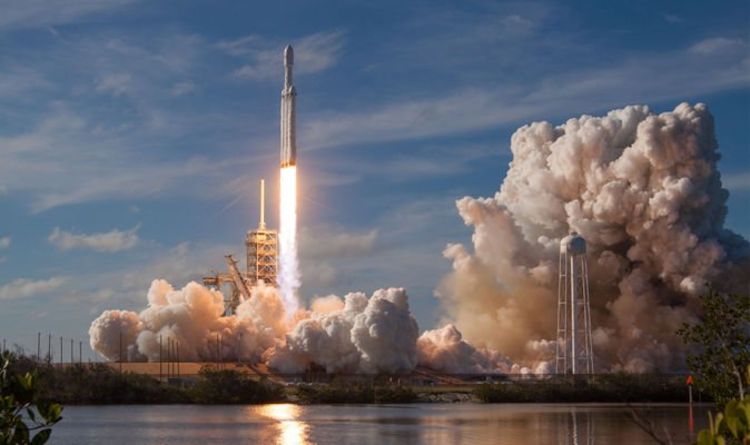 Weather permitting, the Falcon Heavy will take off on its first commercial voyage on Wednesday, April 10. SpaceX was forced to delay the rocket’s launch by one day, following stormy weather conditions over Cape Canaveral, Florida. The California-based rocket manufacturer has now pencilled in a new launch window of 11.35pm BST (6.35pm EDT) tomorrow. The SpaceX launch window is expected to last around two hours.

How to watch the SpaceX Falcon Heavy launch online

All of SpaceX’s rocket launches are streamed live online via the company’s website and official YouTube page.

The SpaceX livestreams typically kick off about 15 minutes before the final countdown.

You can also watch the monstrous rocket take off from Launch Pad 39A at the Kennedy Space Centre via the embedded Space & Universe stream below.

READ MORE: What is the difference between the Falcon Heavy and Falcon 9 rocket?

The payload is the Arabsat 6A communications satellite built by US contractor Lockheed Martin for the Saudi company Arabsat.

The satellite will enter into orbit tomorrow at a height of 22,000 miles (36,000km) above the Earth’s equator.

But more importantly, the launch will mark the second ever flight of the incredible Falcon Heavy launch system.

READ MORE: Elon Musk thinks you can sell your house and fly to MARS

Armed with an array of 27 powerful Merlin engines, the Falcon heavy first flew into space on February 6, 2018.

The rocket’s launch was watched by millions around the globe, thanks in no small part to SpaceX founder Elon Musk deciding to use a cherry red sports car as the payload cargo.

Today, the rocket is the single most powerful spacecraft in operation and SpaceX claims the Heavy exceeds NASA’s historic Saturn V rocket by a factor of two.

With its 27 Merlin engines across the three first stage bodies, the Falcon Heavy can generate up to 2,267 metric tonnes (five million pounds) worth of thrust.

According to SpaceX, this is more than 18 Boeing 747 aeroplanes at liftoff.

Upon descent, the three Falcon boosters detach and land separately back on Earth for future missions.

SpaceX also boasts the rocket can lift up to 64 metric tonnes into space, making it more powerful than a Boeing 737 jest full of cargo, crew and passengers.

The rocket company said: “Falcon Heavy draws upon the proven heritage and reliability of Falcon 9.

“Its first stage is composed of three Falcon 9 nine-engine cores whose 27 Merlin engines together generate more than 5 million pounds of thrust at liftoff, equal to approximately eighteen 747 aircraft.

“Falcon Heavy was designed from the outset to carry humans into space and restores the possibility of flying missions with crew to the Moon or Mars.”

READ  Aging was REVERSED in a small group of men, study reveals