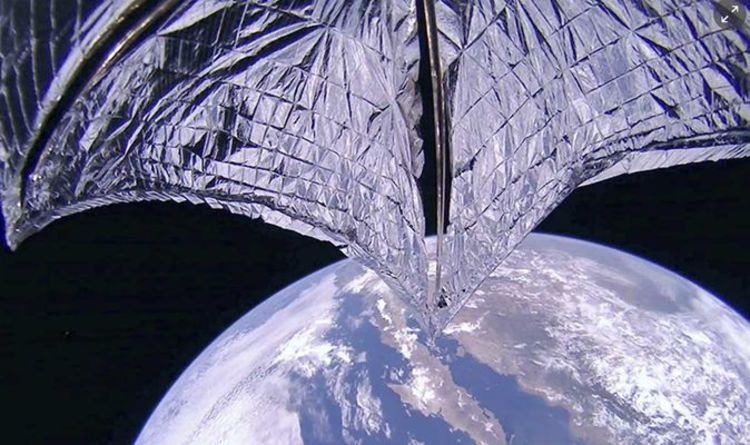 The Lightsail 2 craft is an experiment to prove the practical application of a controlled ‘solar sail’, which has the ability to far outstrip traditional rocket engines. The revolutionary mission was launched on June 25 and developed by ‘The Planetary Society’, based in the US. The voyage became the first ever to demonstrate solar sailing and used energy from the Sun to orbit Earth.

The tiny 10x10x30cm spacecraft was powered with propelled sunlight bouncing off its mirrored sails.

The exploitation used thin plastic sheets to gather the momentum from the Sun.

Most notably the spacecraft was able to manoeuvre without the need for fuel or engines.

“Our criteria was to demonstrate controlled solar sailing in a CubeSat by changing the spacecraft’s orbit using only the light pressure of the Sun, something that’s never been done before.

“I’m enormously proud of this team. It’s been a long road and we did it.”

He said: ”For The Planetary Society, this moment has been decades in the making.

“Carl Sagan talked about solar sailing when I was in his class in 1977. But the idea goes back at least to 1607, when Johannes Kepler noticed that comet tails must be created by energy from the Sun.

“This moment could mark a paradigm shift that opens up space exploration to more players.

“It amazes me that 50,000 people came together to fly a solar sail.