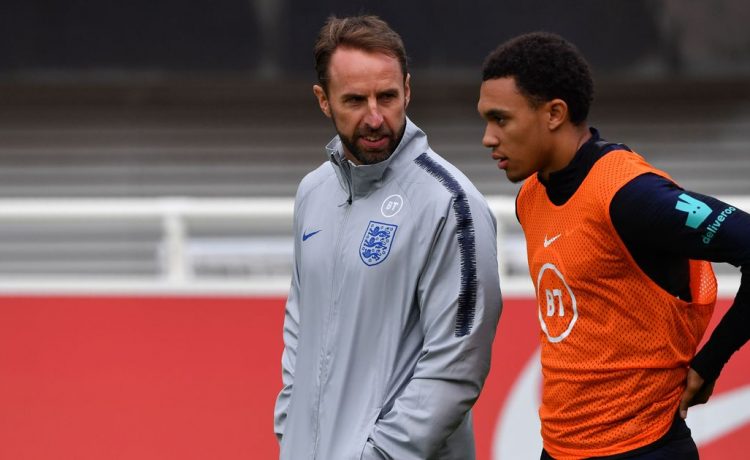 Gareth Southgate has had to hold private chats with Trent Alexander-Arnold to assure him that no issue exists between them amid reports he was set to miss out on Euro 2020.

The Liverpool right-back is in a highly competitive area of the squad and has previously been left out by the Three Lions boss.

Southgate has the likes of Kyle Walker, Reece James and Kieran Trippier at his disposal.

All three have been selected for this summer’s tournament alongside Alexander-Arnold.

But the England boss had to sit down with the 22-year-old as rumours surfaced about his future with England before the announcement.

Southgate accepts that speculation comes with the territory, but was determined to protect his players after admitting he was “puzzled” by the reports.

He said: “I felt there were stories that ran that were so far off the truth. I would never normally speak to a player because I read a lot of stories about myself that are not true, but I have to accept that’s the job I’m in and people speculate and write as if it is exclusive.

“But when it is a player and they might feel that maybe it’s true, maybe the manager is speaking to the press behind their back, that is obviously not the case.

“Even last night we’re still dealing with that, puzzled, because he’s still taking set-plays in the morning for the game tomorrow and then he’s reading he’s not going to the Euros. I don’t understand it.

“For me, it is no drama, as England manager this is what I deal with. I always go back to the front page story that I’m the biggest fan of the British Bake Off, I have Bake Off parties and I’m desperate to be on the show.

“The only thing that was true about the story was my age.

“That’s the world I live in, but for my players I want to protect them. So last night we’re speaking to Trent saying ‘I don’t know where this has all come from, it’s nonsense’ because people then jump on the agenda and say I don’t like the kid.

Southgate named ten defenders in his 26-man squad for this summer’s tournament.

Taking four right-backs is something of an unprecedented step however but the England boss has cited the quartet’s versatility and differing skillsets as justification for his selection.

“Yes we have four players who play sometimes at right-back for their clubs but Kieran’s here, who’s been playing as a wing-back as well as right-back. Reece James has played right of a three or right wing-back.

“Trent plays at right-back and Kyle Walker has, as you know, played at centre-back on the right of a three for us and has also played at left-back during a match for us against Denmark.

“Reece James has also played in midfield in a match against Aston Villa. Basically they’re all in the squad because they’re all really good footballers and if I could have picked five or six right-backs I probably would have done.”