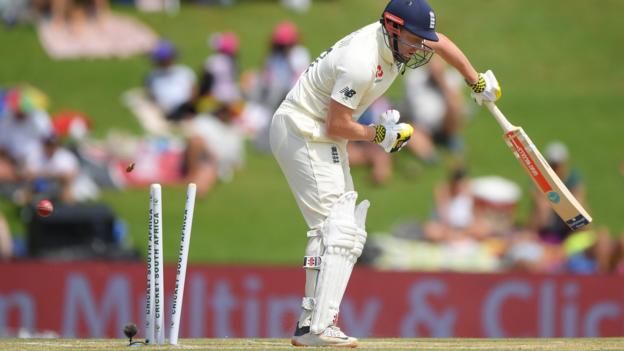 An England batting collapse gave South Africa the upper hand in the first Test as 15 wickets fell on an entertaining second day in Centurion.

South Africa were quickly reduced to 29-3 in response, with Jofra Archer taking 2-37 in a fiery spell.

England’s bowlers showed admirable fight after a poor display with the bat, but batting last on this pitch will be a difficult task.

With uneven bounce and deliveries keeping low, England may have squandered their best chance of victory with their collapse.

Batting collapses have been a feature of England’s Test cricket in the past two years but having limited South Africa to 284, the visitors would have been hopeful of building a big first-innings lead.

There was some uneven bounce on the pitch but England fell to some poor shots, poor technique and the unerring accuracy of Philander.

Having lost openers Rory Burns and Dom Sibley cheaply, both men edging deliveries that found extra bounce behind, Joe Denly led the way for England with a painstaking half-century.

At 142-3, with Denly and Ben Stokes sharing a 72-run partnership, England were well set. But Denly’s dismissal, caught behind off debutant Dwaine Pretorius, seemed to break the tourists’ concentration.

Jonny Bairstow, recalled because of illness in the squad, was bowled after being undone by Anrich Nortje’s pace, while Stokes was furious as he drove at the same bowler and was caught behind off an inside edge.

Jos Buttler and Sam Curran shepherded England to tea but a cheap ending always felt inevitable. Curran flicked Rabada to short leg, where he fell to a low catch by Zubayr Hamza, Buttler was caught behind off a rising Rabada delivery and then Stuart Broad was bounced out.

When Archer fell, bowled by the superb Philander, England had lost their final seven wickets in 94 balls and had given their bowlers just 53.2 overs of respite after a sweltering opening day.