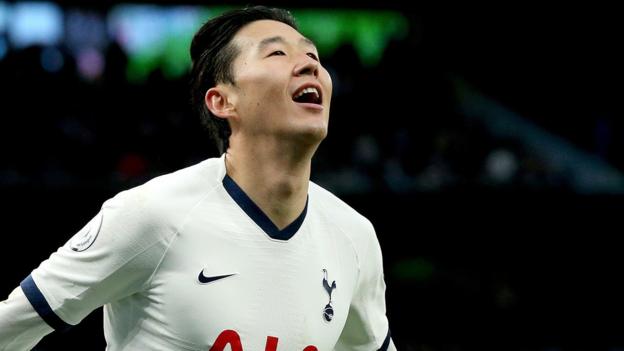 Son Heung-min scored one of the goals of the Premier League season as Tottenham returned to winning ways under Jose Mourinho by brushing aside Burnley.

Son picked up the ball on the edge of his area before sprinting the length of the pitch – leaving a trail of Burnley players in his wake – and slotting in to give Spurs a 3-0 half-time lead.

That all but sealed victory after Harry Kane had thumped the home team ahead and Lucas Moura converted a second from close range.

Burnley had chances of their own in the first half, hitting the woodwork through Robbie Brady, but paid dearly for their defensive vulnerability.

Spurs skipper Kane took advantage of more slack defending to fire in the fourth, then combined with Moussa Sissoko – again allowed to waltz through unchallenged – for the fifth.

Mourinho’s side moved up to fifth as a result – for the time being at least with Wolves having the chance to go back above them on Sunday – while Burnley drop to 13th, three points above the relegation zone after their third defeat in a row.

‘The best goal of my life’

While Spurs produced what Mourinho called a “complete performance”, it is Son’s stunning solo goal that will capture the headlines, be lauded on social media and endlessly replayed in the coming months.

Collecting the ball on the edge of his area when Spurs were already 2-0 up, the South Korean used his blistering pace to drive forward with the visiting players struggling to get back.

Those Clarets shirts that were in front of Son were too afraid of diving in and letting him skip through, yet he did that anyway by gliding past Matthew Lowton and Erik Pieters.

That presented him with only Burnley keeper Nick Pope to beat and, perhaps most impressively, he maintained his composure to slot in.

“I don’t know what happened until the end! When I got the ball l tried to pass to Dele Alli and waited for his movement.

“But I couldn’t find him so I just went and went. I’m happy to score this goal.”

Goals galore for Spurs – and finally a clean sheet

Mourinho’s standing as one of the world’s leading managers, having delivered trophies at a host of top clubs, has been built on the defensive organisation and stability of his teams.

But it was the attacking nature of his new side’s performance which again caught the eye, with Spurs producing their most devastating display under the Portuguese to date.

Looking to make amends for Wednesday’s limp defeat at Manchester United – their first loss under Mourinho – Spurs hassled and harried from the first whistle, pressing Burnley quickly and putting them under an amount of pressure with which they could not cope.

Kane’s quick opener set the tone and even from that point it looked as though Burnley would struggle to come away from north London with anything other than defeat.

Spurs’ position was strengthened by Moura and once Son added that stunning third, their focus came solely on keeping a first clean sheet under Mourinho.

Giving Spurs a solidity which disappeared in the dying embers of Mauricio Pochettino’s reign was high on the Portuguese boss’ list of tasks.

In the build-up Mourinho again called for his side to stop conceding “cheap goals” and, despite allowing Burnley chances which they could not take, finally got his wish.

And it was a clear sign of Mourinho’s pleasure that the first thing he mentioned in his post-match interview in the tunnel was the clean sheet.

“There are still a few holes and chances to opponents but we were much, much, much more solid,” he said.

“It’s the best day because it is the complete performance. It was perfect.”

Burnley’s results over the past six weeks have fluctuated between comfortable wins and one-sided defeats – with this clearly in the latter category.

But even when Spurs were leading 2-0, the Clarets were generously allowed chances to get a foothold in the game.

Striker Chris Wood saw his follow-up to Brady’s header, which hit the underside of the bar and then the left-hand post, blocked by Davinson Sanchez, while Jay Rodriguez perhaps should have converted one of two close-range headers.

Ultimately their inability to take these chances did not cost them – it was a lack of the defensive discipline which has served them so well under manager Sean Dyche.

“We have given the ball away five times at the start and we can’t do that,” the Clarets boss said.

“It is unlike us to be so open and to give the ball away in so many bad areas. It was a tough day. We had lots of the ball, couldn’t open them up.

“We have proven before we can make these games hard and we have to get back to that.”

A high five for Mourinho – the stats

Tottenham round off their Champions League group-stage campaign with a trip to German champions Bayern Munich on Wednesday, a match that has nothing at stake with both sides having already qualified for the knockout phase.

Burnley, meanwhile, entertain Newcastle in an encounter where victory would give each side breathing space from the relegation zone.