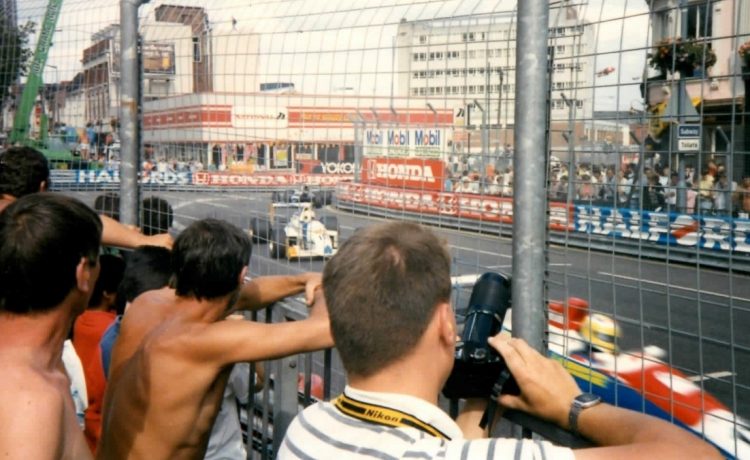 There are many bygone racing tracks worth mourning, from the eye-wateringly steep banked curves of Brooklands to Berlin’s Avus, a five-mile long wall of death once run by outrageous looking Mercs and Auto Unions, but for all that glamour and glory it’s a more mundane lost race that’s won my heart. In the late 80s and early 90s we had the Birmingham Superprix, a series of F3000 and BTCC races remarkable only for the awful driving and chaotic attrition heavy action the cramped layout provoked, and yet an event that lived up to its billing as the Monaco of the Midlands. Here was motorsport at its most bare knuckles, racing that wasn’t necessarily pretty to watch yet was heart-thumpingly raw.

You had to be there to really appreciate the shock of a score of screaming V8 DFVs rattling the windows of the boozers and bookies just south of Birmingham city centre as the likes of Irvine, McNish and Hill hustled their way past in alarmingly close proximity. I was lucky enough to be standing the other side of the armco at the Superprix’ last running in 1990, and I reckon you had to be there to really appreciate how surreal the whole enterprise was; an image that’s stuck with me ever since is of a woman putting out her washing as if it were any other Sunday afternoon, heroically oblivious to the gaggle of Honda Civics noisily trading paint just beyond the back gate. It was motorsport at its preposterous best.

You can glimpse it best not in TV highlights reuploaded on YouTube – they’re still worth a watch, mind – but through modern day accounts and comparison shots that highlight the improbability of it all, or through first-hand footage that captures the violence of it all. And good lord that breed of F3000 were violent things – take a look at an 88 vintage March and the chassis seems to buckle under the weight of the imposing, exposed Judd V8. These cars threw proper chest punches, capable of winding drivers and spectators alike.

To really capture the madness of it, though, and tap into all that raw sensation? Why not a videogame, of course. As a rule we don’t really get enough period piece racers, a pretty dumb rule given how one of the very best racing games of all time – 1998’s Grand Prix Legends – proved the virtues of drilling down into a specific motorsport era. Back then developer Papyrus chose 1967 as its subject matter, capturing F1 at its purest: it was all-time great Jim Clark’s final campaign, and the season that brought us everlasting graces such as the Eagle Weslake and Lotus 49. It was also the season before the sport turned; in 1968 the Lotus 49 was painted in the red, cream and gold of Gold Leaf cigarettes, marking the first time a works team had given its livery over to a sponsor.

The Reynards and Lolas that ran the streets of Birmingham aren’t quite as iconic as those legends of old, but to me they’re just as evocative of a certain era – an era just as beloved as the 60s heyday of Grand Prix Legends. They’re unpretentious, unassuming yet totally wild, like the Superprix circuit itself. There’s none of the airs and graces of F1 at Monaco; this is motorsport at its most egalitarian, and as nothing more than a street fight with sleeves rolled up and elbows out.

Maybe it’s the juxtaposition of the Superprix that sings to me too; the first thing I did when I got home from Birmingham in 1990 was pull out a map of the town I lived in and mark out a race we might call our own, one that screamed past my bedroom window on its way to the high street and that had the Tesco’s car park on the corner doubling up as pit and paddock. I’ve been designing race tracks I might be able to hear from my own front room ever since.

None of those designs could do justice to the Superprix, though, and the strange medley we got in the 80s when a savage breed of race cars tore up and down Birmingham’s Belgrave Middleway. It was a show that offered a little bit of brutality and banality side by side – the sort of thing that motorsport does so very well. The sort of things videogames could do pretty well too, come to think of it.