Social media rumors that a student at the University of Southern California (USC) had contracted the deadly coronavirus triggered an online petition to cancel classes.

On Monday night, an email from the general manager of the off-campus housing complex, The Lorenzo, was sent to tenants reporting that a resident had been diagnosed with the infection.

Within four hours, there were mass hysteria in the form of tweets from scared students and a national-scale petition demanding that classes be suspended.

However, campus officials quickly shut down the rumors and told the student body that if there were cases on campus, local health officials would be the ones to inform them – not apartment building management. 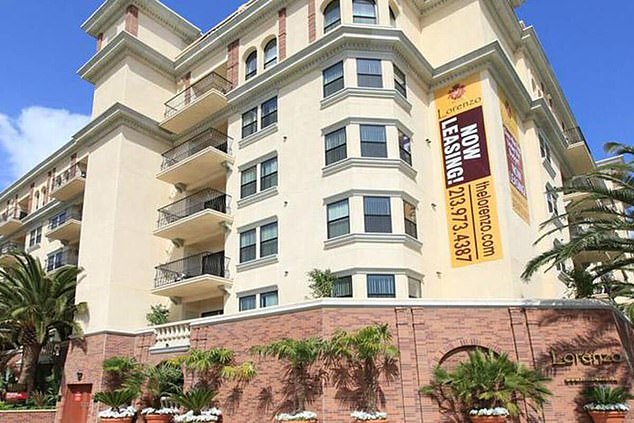 An erroneous email claiming that a University of Southern California student at the off-campus housing complex,The Lorenzo (pictured), had been diagnosed with coronavirus fueled a petition demanding that classes be canceled

Hundreds of tweets were posted about the false confirmed case such as one claiming USC stood for ‘University of Spreading Coronavirus.’

Another student tweeted: ‘So I guess the coronavirus has reached USC territory? The doctors [are about to] tell me to just ‘fight on’ through sickness.’

Some students even drafted a petition requesting that USC cancel classes.

As of Wednesday afternoon, the Change.org petition had garnered more than 10,000 signatures.

‘We want to provide an update to the USC Community because there has been an incorrect report that a student at the Lorenzo, an off-campus housing facility, has contracted the 2019 novel coronavirus,’ the statement read.

‘No one affiliated with USC has developed the illness. If someone contracts the illness, we would notify the community.’

In a later update, university officials told students that news about coronavirus on campus would ‘occur through local public health authorities and will be communicated to the community.’

So far, more than 6,000 people worldwide have been infected with the virus and 133 people – all in China – have died.

As of Wednesday, five cases have been confirmed in the US: Maricopa County, Arizona; Orange County and Los Angeles County, California; Chicago, Illinois; and Snohomish County, Washington.

More than 70 Americans are awaiting test results, but that doesn’t include anyone from USC, according to the Trojan.

According to USC’s Department of Public Safety Daily Incident Log, a student had been taken to a local hospital after complaining of a sore throat and fatigue.

The college’s chief health officer Sarah Van Orman later reiterated to the campus newspaper, the Daily Trojan, that if a student had contracted coronavirus, new would come from the Los Angeles Department of Public Health, not apartment management.

‘The Department of Public Health is the only agency that has the authority to release the results,’ Van Orman told the newspaper.

‘In the event that there were students affected, they would let us know. They would put out a public press release like we saw over the weekend.’

The Lorenzo retracted its statement on Tuesday and apologized for sending the erroneous email.

This is not the first time that misinformation about the deadly virus has quickly spread online.

READ  Snakebites: Like having my hand smashed by a hammer'

One hoax post on Facebook claimed the US had patented a vaccine for coronavirus  several years ago.

It was still up as of Wednesday afternoon, and had more than 4,800 shares.

And an article from the Hal Turner Radio Show claimed 112,000 have died from the infection  – much less than the actual number of 133.

Even governments, particularly China’s, has been spreading misinformation in an attempt to quiet criticism.

Chinese state media reportedly tweeted photos of a new hospital for coronavirus patients being built, but it turned out to be stock images, reported Axios.

The spread of misinformation is dangerous for two reasons, the first being that it can proliferate faster than the news cycle can dispel it.

A 2019 report from the Council on Foreign Relations stated that misinformation about the 2018 Ebola outbreak in the Democratic Republic of Congo ‘undermines confidence in the underlying science, questions the motivations of health professionals, politicizes health activities, and creates problems for responses to disease challenges,’

Coronavirus: Research discovers ‘a strange sensation in the nose’ could predict COVID-19

Ohio man, 23, needed to have his hand REATTACHED after a lawnmower accident

More Than 10% of UK Smokers Quit During the Pandemic

Is December 9 the day Britain starts its Covid vaccination drive?