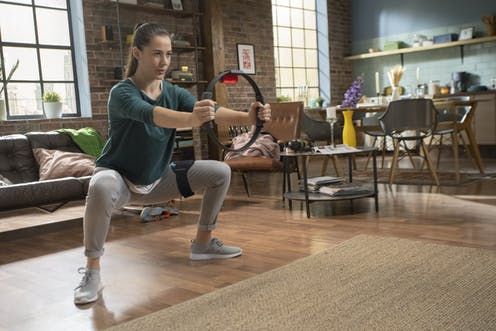 The social distancing measures and self-isolation initiated by the coronavirus pandemic has left people looking for new ways to exercise at home. Could active video games (AVGs) such as Pokemon Go and the recent hit Ring Fit Adventure) be the answer?

AVGs are played by moving your whole body instead of just tapping buttons or a screen. They are marketed as a way for people to take part in physical activity through video games, and studies have shown that they can indeed be effective at increasing physical activity levels and helping people lose weight.

The most recent popular development is Nintendo’s Ring Fit Adventure game for its Switch console, which involves cardiovascular and muscle-strengthening exercises in an interval structure, on top of more traditional game storytelling and animation. The game sold more than 2 million copies in the three months after it was released in October 2019. But looking more widely at commercial statistics from the past 10 years, the number of successful AVG titles is sparse, with at most two titles in the annual top 100 global games – and more frequently zero.

So if AVGs really can benefit your fitness, why aren’t more people buying them? My recent research suggests that most of these games are simply not of a high enough quality and don’t provide enough of a workout to satisfy players. This suggests the industry needs to up its game if it wants to make AVGs a success.

First, the fitness. The UK government advises that people should undertake at least 150 minutes of moderate exercise or 75 minutes of vigorous exercise a week, as well as at least two sessions of muscle-strengthening exercises. While we know that AVGs can increase physical activity levels slightly, they don’t provide a way to carry out sustained periods of moderate activity or any vigorous activity or muscle-strengthening activities.

READ  How we plan to spend our summer - Newsday

The one exception is Ring Fit Adventure, which can offer these things, but even that is dependent on your current fitness level. Frequent gym goers are unlikely to find the game provides the challenge they need so it wouldn’t be much of a replacement while stuck in the house.

All this suggests that most of the current crop of AVGs don’t do enough to improve people’s physical fitness to make that a real selling point of the games.

The other issue is whether AVGs are simply enjoyable enough as games. Our attention and time are finite, even when we can’t leave the house, so AVGs are in direct competition with more traditional video games (as well as other hobbies).

This battle for attention ultimately boils down to a subjective decision about quality and enjoyability: what game do you like playing the most? But there are ways we can try to break down our view of different games into multiple categories to highlight why we might think a specific title is good or bad.

One method used by market research firm Quantic Foundry is the “Gamer Motivation Model”, which tries to show why people choose to play games.

As an enthusiastic gamer as well as professional game researcher, I can name several traditional games that outperform any AVG in each aspect of the model. For example, I can think of no AVG that offers more of an immersive experience with better storytelling and imaginative fantasy than games such as Horizon: Zero Dawn, SpiderMan, God of War, or Final Fantasy. Even smaller budget indie titles such as Child of Light, Ori, and Hollow Knight, still immerse me in a way that AVGs cannot yet achieve.

There are exceptions we can learn from. For example, Pokemon Go has an excellent social element that encourages people to play together. But overall, AVGs appear to have a significant lack of quality and variety.

Read more: Lockdown: how to stay fit at home

Hardware also presents AVGs with a challenging issue in practical terms and the ability to cheat. While games companies have created some innovative technology to play AVGs with, you can still sit on the couch and bounce your knee to trick many of them into thinking you’re exercising. And that might be necessary if you don’t have the space to play them fully in the first place.

The challenge for the video game industry is to make AVGs as effective as sport, exercise or other physical activity, but also so engaging, accessible and varied, that people choose to play them over traditional video games. If AVGs tick both these boxes, we might just have the future of exercise right in our front rooms or on our mobile devices. Without this, even an enforced period of quarantine is unlikely to make most people AVG enthusiasts.

This article is republished from The Conversation under a Creative Commons license. Read the original article.

Sam Peter Kirk does not work for, consult, own shares in or receive funding from any company or organisation that would benefit from this article, and has disclosed no relevant affiliations beyond their academic appointment.

Top 5 Videogames That Made Us Cry – HorrorCultFilms