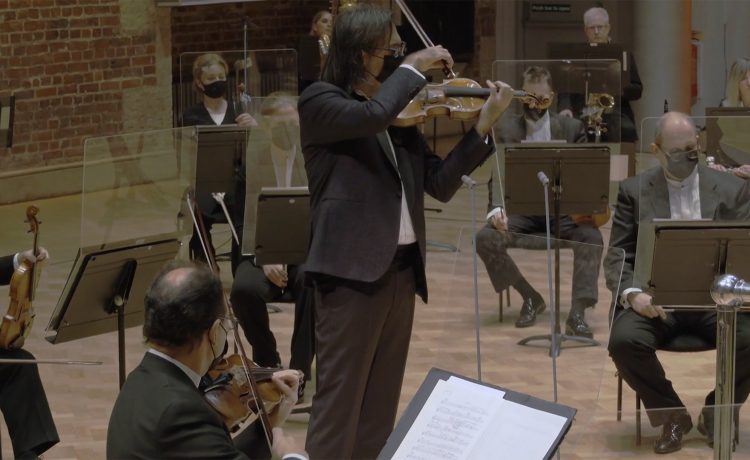 Subtitled “To the memory of an angel”, Alban Berg’s 1935 Violin Concerto is a personal meditation not just on the early death of the 18-year-old Manon Gropius, but also on his own illegitimate daughter – born to a servant while he was still a teenager.

This heady collision of loss and love drives a work that ricochets between lyricism and knottier, more sternly serialist passages.

Reconciling the two moods (or exaggerating their differences) is the job of the soloist – here Leonidas Kavakos. The Greek violinist wears his immense talent lightly, and with his face half hidden by his hair and half by a mask, a stooping figure in the centre of the orchestra, he all but disappears into the music.

From the plaintive simplicity of the bare opening fifths – tracing the violin’s open strings up and down – Kavakos’s tone is veiled, a sepia-tinted memory of sound. Flashes of brighter colour like the first movement’s Carinthian folk-dance and the cadenza-like questions at the start of the second are gone almost before we realise they are there – the whole an inward working-out, a private musing rather than an outward statement.

Kavakos’s tenderness, the deliberately frayed edges of his tone and the sudden sweetness he finds after the catharsis of Bach’s quoted chorale, are enabled by Sir Simon Rattle and the LSO’s encircling support – massive in the work’s violent climax, but otherwise muted shades in this artfully faded musical portrait.

After that, Schubert’s “Great” Symphony seems to turn a light on. The orchestra’s woodwind gleam and glint in the sunny opening Andante – a fresh swirl of melody. Rattle’s tempos are still on the statelier side, giving plenty of space and Romantic weight to a work that fights to move beyond Beethoven and find its own voice.

This measured pace brings out many of the work’s strangenesses; the unexpected repetitions in the finale, the nagging rhythms, the suddenly broken-off thoughts. There’s less momentum, though, through the final movement and the elusive major/minor slips and modulations of the slow movement feel more calculated.

After the apparent spontaneity of the Berg it’s both a return to certainty and control, and a retreat.

READ  Live and Let Die: Did Paul McCartney write the Bond theme? Did it win an Oscar?
Share on FacebookShare on TwitterShare on PinterestShare on Reddit
newsgrooveJanuary 22, 2021