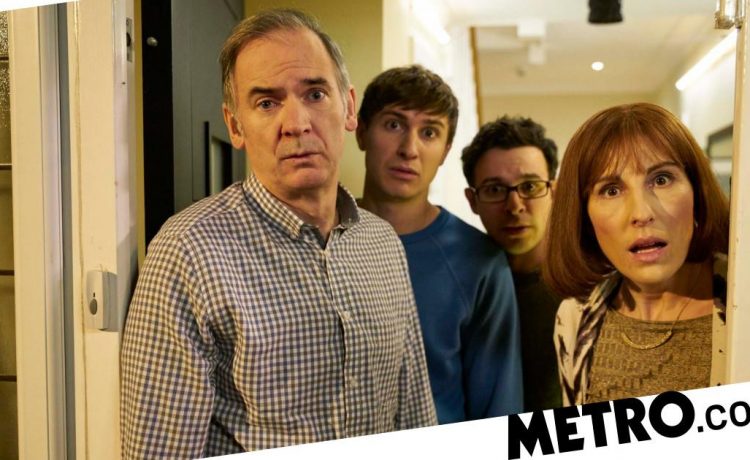 The actor’s rep confirmed that Ritter died ‘peacefully at home’ on Monday night, with tributes coming in for the acting legend most recently known for his stint as Martin Goodman in the Channel 4 sitcom.

While Inbetweeners star Simon- who plays Adam Goodman – isn’t on social media, his co-star and on-screen brother Tom Rosenthal shared a series of tweets on Thursday morning from the actor.

Writing that Simon wanted to get a message out about Ritter, Tom (who plays Jonny Goodman) shared on his behalf: ‘Not even going to touch the acting. That goes without saying. He was the best in the business.

‘What’s less well known is that he was also the Platonic ideal of a green room companion: unfailingly generous (with praise, snacks, the Guardian Sport section); unendingly thoughtful (he would set up shop on the floor if he knew there were going to be more actors than chairs in that day); and undeniably cool (calm and collected in his flat cap, but an absolute coiled spring if there was a game in the offing).’

Simon’s message continued: ‘He was such a peaceful presence but throbbing with intelligence and – let’s not beat around the bush – entirely capable of a hilariously indiscreet and filthy broadside when in the mood.

‘I think I’ll always aspire to be like Paul. I guess that’ll happen when someone pretends to be your Dad for 10 years.

‘I feel unbelievably fortunate to have spent so much time in that green room and hope his real bambinos know how much his fake bambinos loved and looked up to him.’

He wrote on Twitter: ‘Thank you for all your messages, they’re a testament to how great an actor Paul was and how many lives he touched.

‘He was the most devastatingly intelligent and conscientious person with an unmatched crossword acumen and an incredible memory.

‘If he met you once I swear he knew your name for life. Luckily for us he turned such a wonderful mind to bringing life to Martin Goodman for whom he would do whatever it took to make us laugh.

‘Anyone who’s seen Friday Night Dinner knows the amount of shit we put him through and I never once heard him complain. I’ll be forever thankful for working with someone who was so supportive and who taught me so much about professionalism and humility in acting.

‘It was a total pleasure an honour.’

Ritter had filmed a retrospective special for the 10th anniversary of the comedy, which is due to air on Channel 4 later this year.

In his TV career, Ritter also starred in Henry IV, Part II as part of Sam Mendes’ The Hollow Crown series, in the BBC drama The Game, and shows including No Offence, Chernobyl, The Trial of Christine Keeler, Plebs, Cold Feet and Vera.

On the big screen, Ritter appeared in 2009’s Harry Potter and the Half-Blood Prince as Eldred Worple, a wizard introduced to Harry at Professor Slughorn’s Christmas party.

A statement shared with Metro.co.uk on Monday read: ‘It is with great sadness we can confirm that Paul Ritter passed away last night. He died peacefully at home with his wife Polly and sons Frank and Noah by his side. He was 54 and had been suffering from a brain tumour.

‘Paul was an exceptionally talented actor playing an enormous variety of roles on stage and screen with extraordinary skill.

‘He was fiercely intelligent, kind and very funny. We will miss him greatly.’

READ  Billie Eilish admits fame is ‘weird’ and has forced her to be ‘more protective’ of everything
Share on FacebookShare on TwitterShare on PinterestShare on Reddit
newsgrooveApril 8, 2021