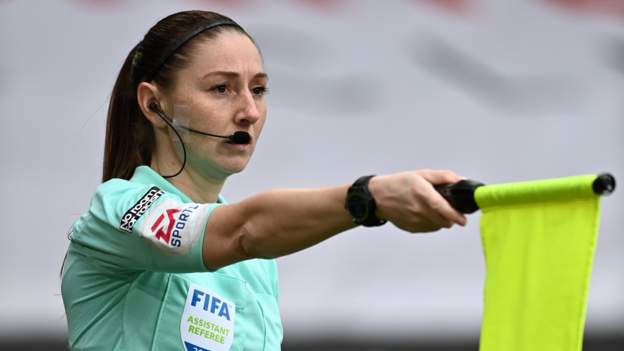 The controversial system is in its second full season in the Premier League, having been brought in in 2019.

It has led to changes in how officials run the game such as assistants delaying their offside decision.

Massey-Ellis, an assistant in the top flight since 2010, said it is a “really difficult skill to learn”.

“I sometimes want to get some stones in my hands, so I don’t put the flag up too quick.

“It was a really steep learning curve, trying to change what you’ve been doing for the last 20 years.”

Players and fans have spoken out against VAR with a poll published in December finding only a third of supporters thought it had improved the game.

Massey-Ellis said the system can “only aid” officials.

“I never want to leave a ground thinking I cost that team three points,” she said.

“VAR has been brought in to stop that error. As a referee we never want to affect the outcome of the game.”

‘Important to remember we are humans’

Earlier this year referee Mike Dean notified police after his family received death threats following a decision he made during a Premier League game.

Massey-Ellis said it is “important to remember we are humans behind the shell”.

“Don’t cross that line to being abusive to that person,” she said.

“Say I am not very good at my job or missed a throw-in, I can deal with that, but when you start saying it is because of this or that, that is where the line draws really.”

Massey-Ellis is the only regular female Premier League official, although the English Football League has appointed its first female referee to officiate a game – Rebecca Welch.

“Whenever I make a mistake, I do hope people don’t think I made that mistake because I am a woman,” she added.

“Maybe that is a bit of pressure I put on myself but we are human and we do make mistakes as referees.”