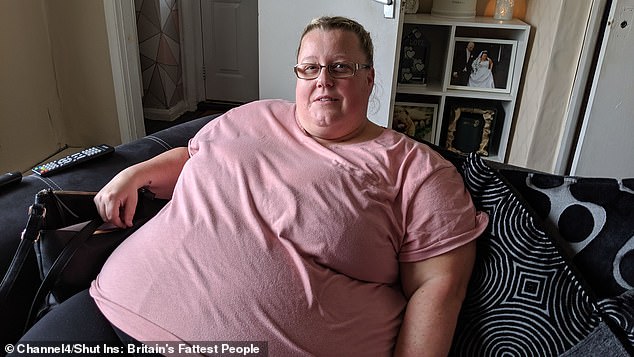 Samantha, 35, from Hartlepool, who appears on the Channel 4 show tonight, feels too ashamed to go out, leaving the responsibilities of family life to her husband Keith, who she has been with for the past 14 years.

The documentary follows Samantha, who feels that her issues with food and her weight have made her life intolerable, and for the last three years, she’s shut herself away.

‘I’ve just shut myself away,’ explains Samantha, who struggles to even move around her own home. ‘Slowly but surely, it’s just got worse and worse.’

‘Sometimes I just don’t want to answer my phone, let alone answer the door. Everything is just becoming too much for me now. I’m only 35 but I feel like I’m 90.’

Samantha, 35, from Hartlepool, who appears on the Channel 4 show tonight, feels too ashamed to go out, leaving the responsibilities of family life to her husband Keith. Pictured, pre-op at over 30 stone 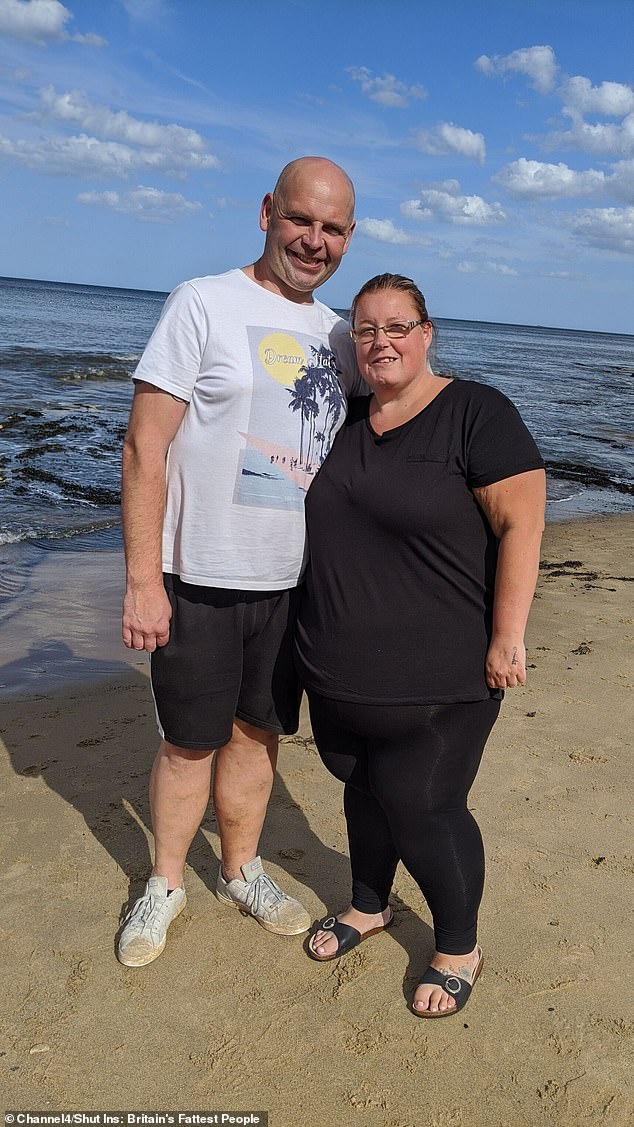 Samantha explains that she struggles to dress her 62 inch bust, 57 inch waist and 72 inch hips.

‘I hate putting clothes on because I just stress,’ she says. ‘When I get dressed clothes get chucked everywhere and I call myself names because I think, “what have you done?”

And by hiding herself away, Samantha shields herself from the taunts of others.

‘I’ve had some pretty awful things said to me in the past about my weight,’ she explains. ‘Like a fat monster, or “look at the size of her.” I’m too ashamed to go anywhere, for anybody to look at me.’

Samantha, who counts a doner kebab as one of her guilty pleasures, says: ‘They are like one of my favourites. They remind me of being a kid. I love spaghetti bolognese. Crisps…they’re my absolute demons. I can just eat and eat them.’

During the day when she’s home alone, Samantha will order in a takeaway for lunch and all day long, she grazes on high-calorie snacks, while in the evening, Keith is on hand to take late-night orders.

READ  Back pain: Eight signs the condition is serious - recognise any of these symptoms?

‘I can’t blame my husband or anybody else because I know I did the damage and I put the food in my mouth,’ she says. ‘I am the world’s biggest critic to myself, I really am.’ 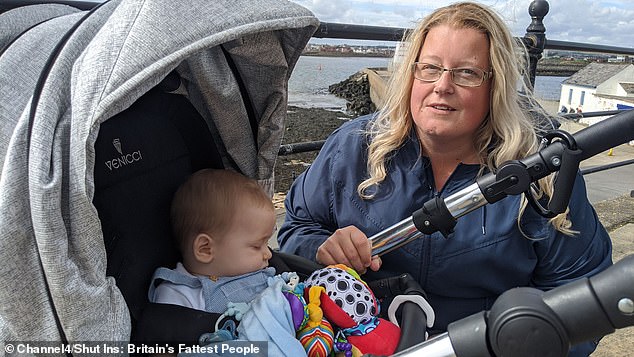 With a grandchild (pictured) on the way, Samantha (22 stone post op) is determined to break old habits and change her life 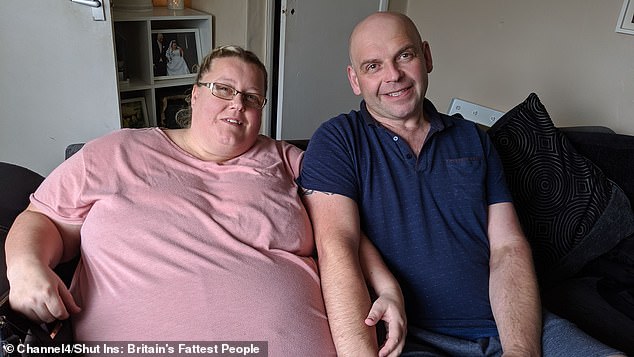 Keith, who works in a bakers, say’s he’s Samantha’s carer, housewife, family man – and even has to help her with her personal care. Pictured, Samantha at over 30 stone

The only time Samantha leaves her home is when her mother Julie brings her over to her house. But Julie has never worried about her daughter.

‘Sammy was very flighty, happy go lucky, very chatty and loving. She never had any issues with food at all,’ Julie says.

However, at 17 and pregnant, Samantha moved out to live with her partner, but when baby Charlotte, now 18, was six-weeks-old, the relationship broke up.

WHAT IS INTRACRANIAL HYPERTENSION?

Intracranial hypertension (IH) is the medical term for a build-up of pressure in the brain.

This can come on suddenly due to a severe head injury or stroke, which is known as acute IH.

Chronic IH is rare. It does not always have a cause but can be triggered by a blood clot on the brain, or a brain tumour or infection.

Cases with no obvious cause are called idiopathic IH. This is more common in women in their twenties and thirties.

Idiopathic IH has been linked to obesity, chronic kidney disease and lupus.

It may also be triggered by hormone problems, an abnormal number of red blood cells and certain drugs, like steroids.

This form of the condition is thought to affect two in every 100,000 people in the UK, statistics show. Its US prevalence, and that of chronic IH, is unclear.

Treatment usually involves medication to remove excess fluid from the brain. Shunt surgery may also be required to divert this fluid elsewhere.

Left untreated, chronic IH can be life-threatening. Idiopathic IH also causes vision loss in one in every five to 20 people if untreated.

‘Food became a comfort for me. It became my friend,’ says Samantha. ‘The more food I could eat, the better I felt.’

An upset Julie adds: ‘It’s heartbreaking. It’s awful to watch my daughter suffering the way she is. It’s an eating disorder, isn’t it?

‘Her health is deteriorating in other ways. My biggest fear is having to bury my daughter.’

As well as daughter Charlotte – Samantha, whose lack of activity and weight has resulted in numerous health conditions including acid reflux, arthritis and gall stones – also has two school-aged children – Max and Mia.

‘I’m not the best mum because I can’t do for my children what I should be doing,’ she says. ‘It’s just awful they think, “My mum’s in bed…we’ll just leave her there.”‘

‘It shouldn’t be that way…but it’s just the norm for them at the minute.’

Samantha also experiences severe headaches caused by intercranial hypertension, which can leave her in bed for days at a time and could even result in her going blind.

Keith, who works in a bakers, adds that he’s Samantha’s carer, housewife, family man – and even has to help his wife with her personal care.

‘This is the time I feel like I’ve got a carer,’ admits Samantha. ‘It shouldn’t be that way really. He’s my husband – not my carer.’

However, with a grandchild on the way, Samantha is determined to break old habits and change her life.

After seeing the surgeon, she is tasked with losing around 5kg over the next five weeks to prove she is engaging and ready to break her addiction to food.

Samantha’s been asked to stick to around a 1,000 calorie- a-day – half of the average daily intake, and a quarter of her usual quantity.

Crisps and takeaways are banned in favour of a more nutritious meal plan. But a few days in, Samantha starts to struggle.

‘My emotions are up and down,’ she says. ‘It’s frustrating one minute and the next it’s, “Come on we can do this.”‘

Speaking of a few slip ups, she admits to having a couple of sips of fizzy pop.

But a trip back to the surgeon reveals she’s managed to lose an impressive 9kg – almost double the weight she was expected to – and she’s offered surgery.

But one week into her new diet, Samantha has a major wobble.

Keith reveals: ‘Sammy fell off the wagon over the weekend. She had a couple of drinks, few chocolates and a chicken kebab. It is hard, we’re arguing about it.’ 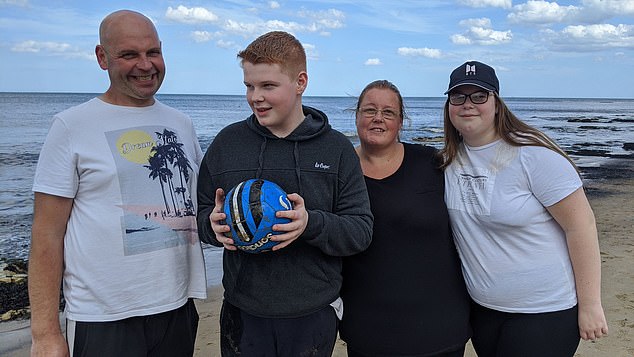 Samantha post op at 22 Stone, with her family and husband Keith (pictured)

But with three weeks left before surgery, the mother-of-three manages to pull herself back on track and is determined to prove she can change her ways – and sticks to an 800 calorie-a-day liver shrinking diet and does more exercise.

After four weeks on her low-calorie diet, Samantha sheds another 10lbs in weight, meaning she’s cleared for surgery.

The surgeon successfully gives her an operations which makes her stomach smaller and bypasses a part of her stomach and small bowel.

A year later, it’s revealed Samantha has already shed nearly a quarter of her starting weight of over 30st, and is now 8st lighter.

‘I’m absolutely blown away by the weight I’ve lost,’ she says. ‘It’s crackers. I’m changing all the time. It’s not just on the scales you see your victories, it’s how you look and how you feel.’ 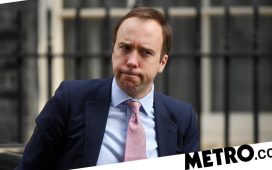