NewsGroove Uk
NewsGroove Uk > Travel > Shocking video of luxury yacht on fire with 15 people on board in Mallorca, Spain
Travel

Shocking video of luxury yacht on fire with 15 people on board in Mallorca, Spain 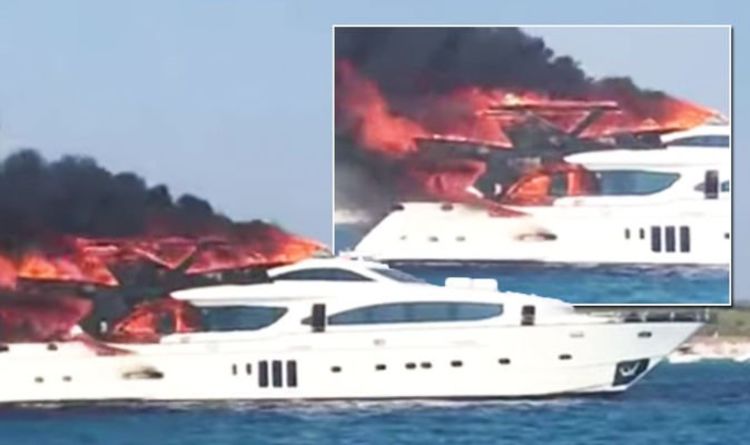 A luxury yacht caught on fire in Mallorca, with 15 people on board.

The fire affected a luxury yacht that was in the waters of Es Trenc Beach, in the Mallorcan municipality of Campos yesterday.

As reported by Maritime Rescue, the alarm started at 3:00 pm and the Salvamar vessel, together with staff from 112 rescue service, went to the scene.

Maritime Rescue explained that at one point it was believed the fire had been controlled, but hours later the fire continued and several agents continued with the work of extinction.

The causes of the fire are still unknown but the 15 people on board have been rescued in good health.

Fifteen people were rescued on Saturday afternoon from a burning luxurious yacht in front of the paradise beach of Es Trenc.

According to the first information, there were no reports of serious injuries or intoxication despite the fact that the wrecked boat, more than 30 metres in length, was engulfed in flames and smoke.

The events occurred on Saturday at five in the afternoon on a luxurious yacht that was in the area of Es Trenc.

Fifteen people who were at that time aboard the D’Anglaterre boat were rescued. One of them actively collaborated with Maritime Rescue specialists while fighting the flames.

The two boats remained in es Trenc with the extinction tasks, which were very difficult due to the highly flammable materials of the yacht.

The wrecked ship, D’Anglaterre, is advertised as a charter.

It is a luxurious yacht of 33 metres in length, with six cabins and capacity for twelve passengers and five crew members. It has air conditioning, Wi-Fi connection and an indoor jacuzzi.

More travel news from Mallorca has seen strikes at the airport over pay.

The Mallora airport strike was said to affect 400 flights and 74,000 UK nationals this weekend.

The airport workers began an indefinite strike over pay and conditions as they complain about “drunken Brits” on Saturday.