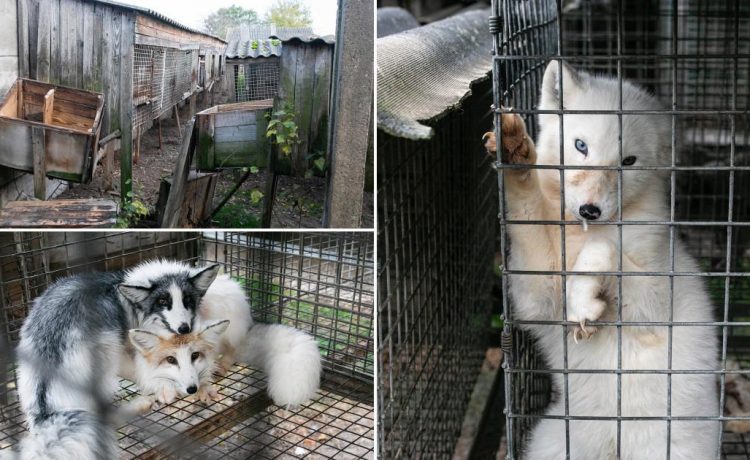 Shocking pictures taken at a fur farm in Poland have led to fresh calls for the UK to impose a complete ban on the trade.

A British campaign group said they found more than 100 dead foxes in cages and on open ground, with others said to have resorted to cannibalism after being left to starve in scenes that ‘resembled a horror film’.

Some foxes on the farm, near Krotoszyn in Poland, were looking for food in heaps of faeces and others were cuddled up next to corpses, Open Cages said.

It has led to fresh calls for an outright ban on fur sales in the UK, extending an existing law prohibiting farming, where animals are bred and killed for their skins.

Connor Jackson, CEO of Open Cages, said: ‘By now we know how depraved the fur industry is, but even this came as a huge shock. I cannot imagine the agony these foxes have had to endure just for a fur trim on a coat.’

Open Cages, part of the Anima International coalition of animal protection groups, described the find as the biggest ever intervention on a fur farm in Poland.

Activists were informed by Polish group Krotoszyn TOZ about the facility after around a dozen foxes were spotted wandering around the suburbs of the town.

The strays were thought to have escaped from the farm and when Open Cages members visited on October 30 the group says they immediately spotted the corpses of foxes and dogs that had been locked in cages.

Holes were spotted under fences, thought to have been dug by the animals that escaped into the surrounding neighbourhood.

Police were immediately notified and helped the activists to enter the farm, according to the animal advocacy group.

Mr Connor said: ‘What the inspectors saw on site resembled a horror film.

‘The animals were deprived of care for at least a few or even a dozen or so days. The owner of the farm is in prison and there was no contact with the person appointed by him to take care of the animals.’

The activists reported finding 130 dead foxes in cages which were most likely to have been killed by electric shock, said to be the most common method to slaughter animals on fur farms, but it was not clear who had put them to death.

Wounds on some of the dead animals suggested they had been bitten by cage-mates, the group said.

Two foxes were put to sleep by a vet while others that had managed to escape their cages wandered around the farm, according to Open Cages.

Another 18 were rescued and placed in veterinary care.

Mr Connor told Metro.co.uk: ‘Fur farming was banned in Britain two decades ago but since then we are still importing millions of pounds worth of fur into our high street shops.

‘It makes no sense to ban fur farming because of cruelty but still be complicit in it by selling it in our stores.

‘So through our campaign, Fur Free Britain, we are calling on the Government to ban the sale of fur.

‘It’s the only way can stop being complicit in the cruelty and contribute to the end of this industry.’

Poland is the third largest producer of real fur in the world, according to Open Cages.

Farming of the material, which also comes from mink and racoon dogs, was banned by the UK Government in 2000 but sales are still legal.in the country and across the EU.

Fashion brands such as Burberry and Prada have taken a public stand against ‘natural’ fur but it is still available on the high street, including at the House of Fraser, which says it only uses responsible farms meeting high standards.

In Westminster, a move to secure an outright ban is being led by Conservative peer Zac Goldsmith.

In September, Government sources were reported as saying that Brexit might provide an opportunity to ban sales, with the UK able to use a break from the single market to place different restrictions on imports into the country from Europe.

A Defra spokesman said at the time: ‘We have some of the highest welfare standards in the world, and that is both a source of pride and a clear reflection of UK attitudes towards animals.

‘Fur farming has rightly been banned in this country for nearly 20 years.

‘Once our future relationship with the EU has been established there will be an opportunity for the Government to consider further steps it could take in relation to fur sales’.

The British Fur Trade Association says its members have signed up to FURMARK which guarantees animal welfare and environmental standards.

The group counters that the sector already has a ‘stringent regulatory environment’ and a ban would lead to thousands of job losses and drive the trade into the hands of unscrupulous farmers.

Metro.co.uk has made attempts to contact the Polish authorities.

READ  Wildcat saved by locals when boa constrictor tries to squeeze it to death
Share on FacebookShare on TwitterShare on PinterestShare on Reddit
newsgrooveDecember 8, 2020