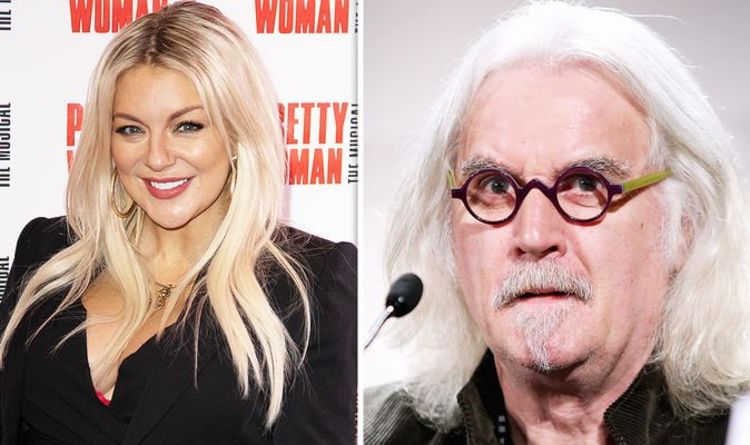 The Pooch Perfect star will return to TV screens tonight on the BBC show, Musicals: The Greatest Show, alongside Amanda Holden. Smith earned her fame in comedies including Gavin & Stacey, Two Pints Of Lager And A Packet Of Crisps and The Royle Family. The actress, who also won over audiences in a miniseries about the late Cilla Black, has regularly professed her love for comedian Billy Connolly.

The comedian, 78, announced his retirement from stand-up comedy last year in the ITV documentary Billy Connolly: It’s Been A Pleasure.

He revealed that his battle with Parkinson’s disease, which he was diagnosed with in 2013, had made it difficult for him to perform.

Sir Billy said that he was “still the same in many ways”, but Parkinson’s disease had left him unable to “think as sharply as I need to, to be a stand-up”.

Billy Connolly announced his retirement from stand-up comedy due to his battle with Parkinson’s (Image: GETTY)

In December, he told the Daily Mirror: “I have done 50 years and that is plenty, quitting is the right thing to do.”

Sir Billy explained that he had “no regrets” about his career and felt he had been “damn lucky” to achieve what he had.

He said: “I achieved everything I wanted, played everywhere I wanted to… I did it all.”

Despite his love of comedy, Sir Billy admitted he wouldn’t “miss the panic” he experienced before a live performance.

Sheridan Smith has starred in the stage musical of Legally Blonde and a number of TV shows (Image: GETTY)

The comedian, who is known as “The Big Yin”, compared going on stage to “walking the plank”.

During the documentary about his life, a number of celebrity fans paid tribute to Sir Billy including Sir Paul McCartney, Sir Elton John and Smith.

In an emotional video recording, Smith revealed the touching way that she had chosen to honour Sir Billy.

She said: “I named my son after Billy by the way, do you know that?

“My son is called Billy, he’s named after Billy Connolly.”

The video then flipped to Sir Billy, who seemed taken aback by the comment.

Sir Billy smiled at the camera and in what seemed like a lost for words moment, he said: “Oh great!”

The camera then switched back to Smith, who was extremely emotional, and said: “I’m going to cry.”

Sheridan Smith said that she has ‘found peace’ since becoming a mother after years of partying (Image: GETTY)

This wasn’t the first time, she revealed her admiration for Sir Billy.

Ahead of the release of the 2012 film Quartet, which starred Sir Billy and Smith, she was amazed by the comedian’s talent.

Smith told Digital Spy: “Billy [Connolly]’s brilliant, he’s good at ad-libbing [and] he can throw some extra things in.”

She commented that there was “genuine laughter and flirting” between them and said: “He’s got a little twinkle, Billy.

“I think [my character] Dr [Lucy] Cogan has a little soft spot for him even though he does overstep the line sometimes with his comments.”

Sir Billy made a great impression on Smith, which led her to name her son Billy, who was born on May 9, last year.

She celebrated his birth with an Instagram, where she wrote: “Our little man has arrived! We are both completely overwhelmed with love.”

Two months later, Smith and her fiancé Jamie Horn shared a photograph of a cake to mark their new arrival.

The sweet treat was covered in yellow icing, featured her son’s name and had an icing creation of him sleeping in a cot.

In the post, she described it as a “beautiful cake” and explained that she had finished filming her ITV documentary Becoming Mum.

Smith said: “Can’t wait for you guys to see it! [It’s] been an emotional rollercoaster but worth every second.”

Since becoming a mother, Smith claimed to have finally “found peace” and was glad to have put her “wild partying days” behind her.

Smith told You magazine: “I’ve been looking for this all my life.

“I have looked in the wrong places – in nightclubs, going out drinking, pushing myself with work.

“Now in this little baby, I’ve found that I’m at peace with everything.”

Sheridan Smith features in Musicals: The Greatest Show, which airs at 7.40pm tonight on BBC Two and BBC Radio 2.