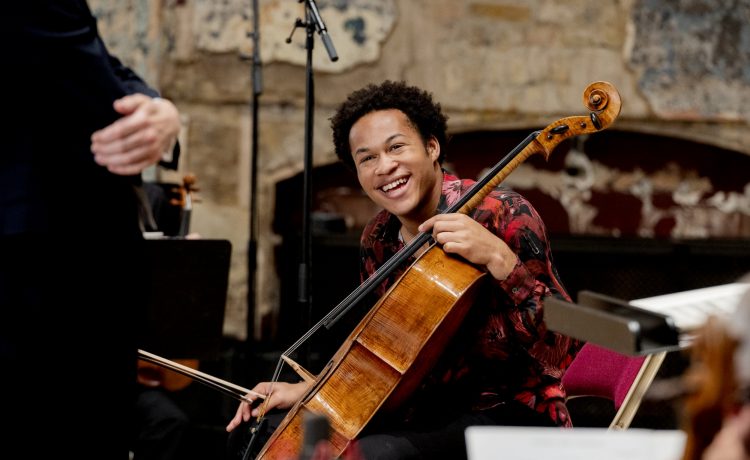 Presenting online concerts has been a steep learning curve for the music sector. More power, then, to the Philharmonia’s many elbows: in Thursday’s webcast, the first of three for their Summer Sessions series in partnership with Classic FM, they showed exactly how well it can be done.

In a short programme conducted by John Wilson, Sheku Kanneh-Mason, justifiably British music’s man-of-the-moment, was soloist for Saint-Saëns’ Cello Concerto No 1 and the orchestra’s string section let rip with Vaughan Williams’ Fantasia on a Theme of Thomas Tallis.

To see a smallish orchestra with players spaced wide apart had me wondering how the ensemble would work. Answer: extremely well, with a rich, unified orchestral tone rising around the characterful interior of Battersea Arts Centre (BAC). Interviews with, among others, technical staff revealed that distancing the musicians produced an unexpected side-effect: a more spacious sound. But with the three-metre separation rule for wind and brass, some of the second woodwinds had disappeared. Wilson made it work nonetheless.

Kanneh-Mason brought a light-filled, luminous tone to the Saint-Saëns’ twinkle-toed virtuosity, beautifully balancing its drive and vigour with moments of radiant lyricism. The French composer’s sound is both balletic and operatic, and Wilson’s conducting kept the drive and fizz zipping along, while giving the soloist ample room to shine.

The Vaughan Williams Tallis Fantasia proved a perfect choice: the score includes a distant sub-group of players, and at its world premiere (in Gloucester Cathedral in 1910) the audience kept silent because of the ecclesiastical setting. So the lack of applause felt vaguely “authentic”.

The quality of filming and recorded sound were superb and the BAC added visual atmosphere galore. With performers and repertoire cannily chosen and sky-high production standards, this was a winner. Wave-emojis from Brazil, Canada and Los Angeles appeared in YouTube’s live-stream as the world tuned in to south-west London.

Above all, the musicians audibly and visibly played their hearts out. They showed how much this music matters: it is not just a commodity, a post-work snoozefest or a place to be seen, but medicine for the soul. This grim year should wake us up to live music’s vital role in our existence, extrapolating some good from the gloom. If the situation continues, though, they should make us pay for tickets.

The series has two more concerts: 22 August and 17 September

READ  Lighthouse Family wants Boris Johnson and the rest of parliament to listen to Lifted and ‘chill the f*** out’
Share on FacebookShare on TwitterShare on PinterestShare on Reddit
newsgrooveJuly 17, 2020