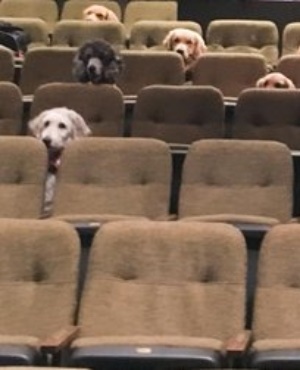 An adorable photo of a dozen eager canines sitting in theatre seats watching a live musical has wowed the internet.

The polite future service dogs attended the performance as part of their two-year training for a Canadian service dog programme, CNN reports.

Head trainer, Laura Mackenzie, said the dogs have also toured zoos, subways and fairs so they can learn to keep calm amid crowds, unusual lights and loud noises.

The well-behaved pups sat quietly throughout the performance of Billy Elliot, but a few curious ones peeked over the seats from time to time.

According to Ann Swerdfager of the Stratford Festival where the show was held, the non-profit theatre company hosts relaxed performances designed for audiences who are sensitive to light, sound and noise, TIME reports.

“The dogs were extremely well behaved,” she said.

“We hope they will join us for years to come.”

After the organisers of the festival tweeted a photo of the pooches – mostly golden retrievers and poodles – the image went viral.

“The empty seats would be understandable if this was a performance of CATS,” actor Mark Hamill commented.

“I would go to the theatre more often if you could guarantee they would fill the audience – no calling out plot twists, no loud chatting about their friends, no checking their 100% bright cell phone screens,” another tweeted.

“Made my day,” another user wrote.

READ  Are protected areas effective at maintaining large carnivore populations?
Share on FacebookShare on TwitterShare on PinterestShare on Reddit
newsgrooveAugust 22, 2019