SEBASTIAN SHAKESPEARE: Why is there still no headstone for Princess Diana's stepmum?

She led an extraordinary life, marrying two earls and a count — and, along the way, became stepmother to Diana, Princess of Wales.

But, in death, the vivacious Raine, Countess Spencer is languishing in near anonymity.

Three years after she died aged 87, ‘Acid Raine’ — as she was bitterly dubbed by her stepson Charles Spencer — lacks a headstone on her grave.

Instead, her resting place in North Sheen cemetery, West London, is marked by a prosaic wooden cross — a year after Raine’s only daughter, Charlotte, assured me that the family was ‘in the process of commissioning the right stone’. 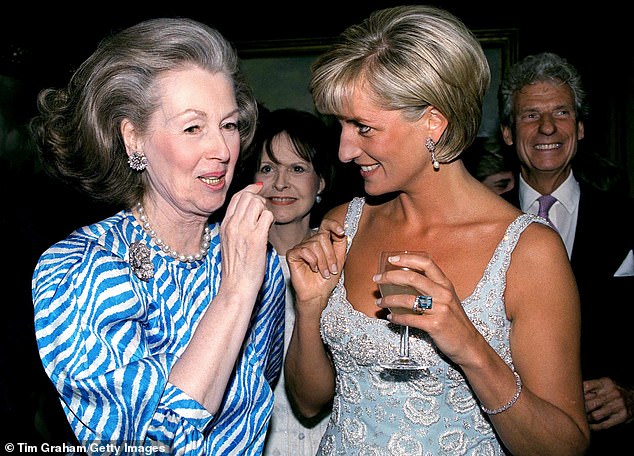 Princess Diana talking with the vivacious Raine, Countess Spencer. Three years after she died aged 87, she lacks a headstone on her grave

Alas, that process has ‘not been straightforward’, explains Charlotte’s brother, Henry, youngest of Raine’s four children by her first marriage to Gerald Legge, 9th Earl of Dartmouth.

But Henry, 50, a distinguished barrister, believes that a headstone worthy of his mother is finally in the offing.

‘I understand from my sister that we are now quite close to having a tangible product,’ he tells me, adding that the family wants something which does justice to Raine’s ‘interest in and knowledge of the visual arts’. 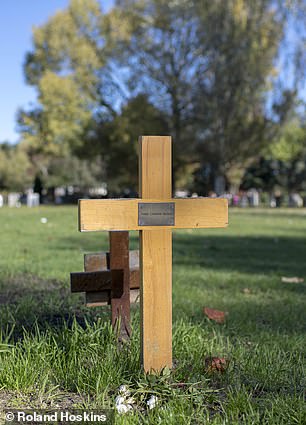 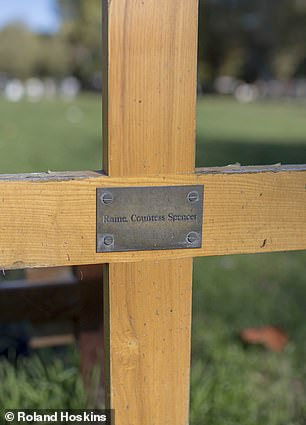 The grave of Countess Raine Spencer in the North Sheen Cemetery, London (left and right). Her grave is marked by a prosaic wooden cross — a year after Raine’s only daughter, Charlotte, assured me that the family was ‘in the process of commissioning the right stone’

Charlotte declines to comment, but her husband, Old Etonian Alex Carcaci, the 13th Duke of Carcaci, confirms that progress is at last being made.

‘The person [working on the headstone] has a lot of things on. Everything’s been approved; he’s done all the samples and he’s going to make it when he can. It looks very good.’

A well-wisher has placed red roses on Raine’s grave. Rather poignantly, they are not real — but plastic. But perhaps Raine, who became Diana’s stepmother when she married Johnnie, 8th Earl Spencer, in 1976, wouldn’t have minded.

Despite her succession of titles, she always remembered that she was a McCorquodale — the only child of flamboyant novelist Barbara Cartland by her first husband, Alexander McCorquodale.

‘Who were the McCorquodales?’ Raine used to ask. ‘Printers from Manchester.’ 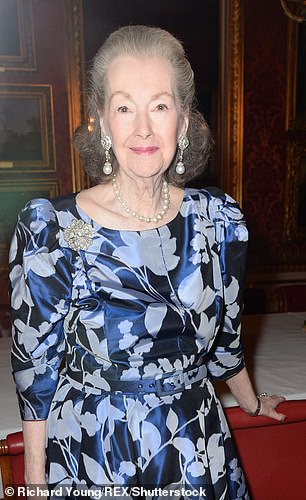 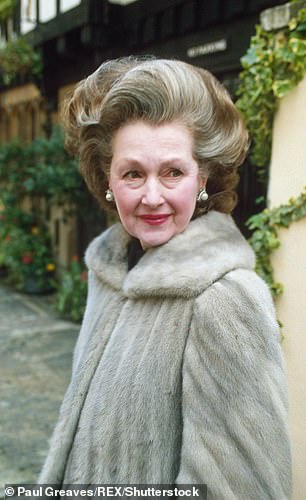 Her son believes that a headstone worthy of his mother is finally in the offing. Countess Raine Spencer married two earls and a count

Liam’s lad has it made (relatively speaking, that is) 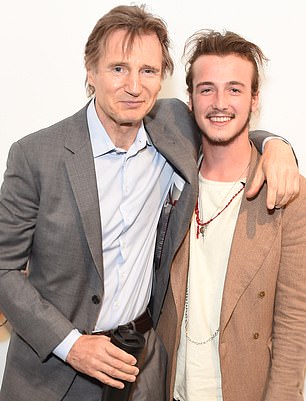 Talk about keeping it in the family. Micheal Richardson, 24-year-old son of Hollywood star Liam Neeson and the late Natasha Richardson, has landed his first leading role in new film On Our Way — and it will be a very cosy affair.

Micheal, who last year paid tribute to his mother by dropping his father’s surname in favour of hers, will play a young man, Henry, coping with the death of his mother — played by his cousin, Joely Richardson’s daughter, Daisy Bevan, who is only three years his senior. 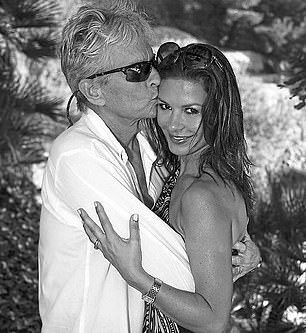 Michael Douglas might have two Oscars under his belt, but there are few things he is more proud of than his marriage to Catherine Zeta-Jones.

And to mark their 19th wedding anniversary this week, the 75-year-old posted online a touching picture of the loving couple (above).

Swansea-born Catherine, 50, who is the mother of two of Michael’s children, reveals that to celebrate the occasion Michael’s 102-year-old father, Hollywood star Kirk, sent them a letter of advice.

‘To stay married you must obey your wife. Keep practising what I do with my wife,’ wrote Kirk, who has been married to actress Anne Buydens, 100, for 65 years. 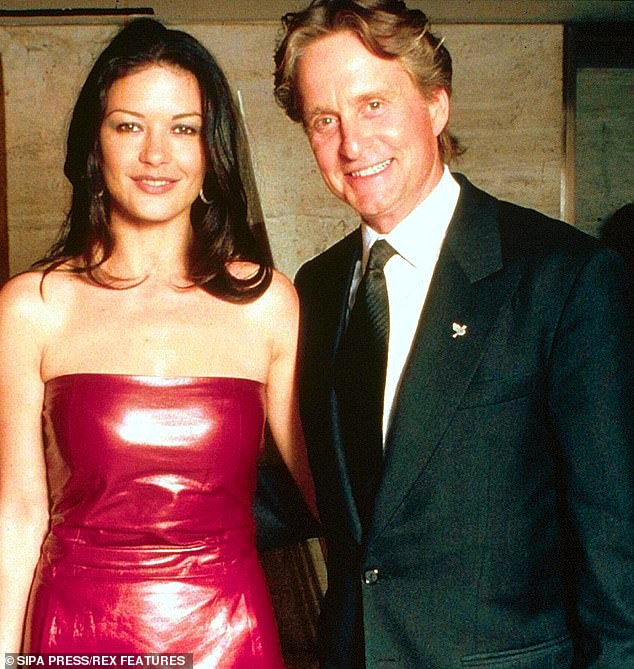 Stop all the clocks. Bella, the beloved Labrador of Highclere Castle, has died. ‘Her wonderful heart has given out and this major part of my life has gone,’ says the Countess of Carnarvon, whose castle is the backdrop for Downton Abbey. ‘Even knowing it was coming has not prepared me for the huge loss, perhaps because she gave so much love. Bella has been a calm, loving centre of life for the whole family and for those who work and live here.’

Starring in Richard Curtis’s latest film, Yesterday, hasn’t exactly elevated Sanjeev Bhaskar’s profile. The 56-year-old, best known for his role in BBC sitcom The Kumars at No.42 opposite his wife, Meera Syal, recalls a fellow actor buttonholing him about it. ‘I’ve worked with your wife. Have you seen Yesterday? It’s really good. It’s a film. If you like The Beatles, you should see it,’ the thesp implored. Sanjeev admitted that he, in fact, was in it, and was ‘the one who looks and sounds like me’. 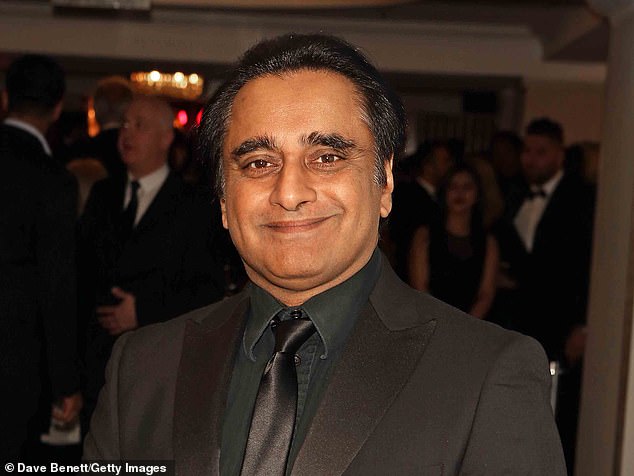 Sanjeev Bhaskar, 56. He is best known for his role in BBC sitcom The Kumars at No.42 opposite his wife, Meera Syal

Meghan’s honeymooning pals have some fish to fry

The Duchess of Sussex’s thirst for foreign adventure has inspired her best friend Misha Nonoo. For just one year after Meghan visited New Zealand with husband Harry — as part of their first royal tour together — Misha, 31, has picked the same destination for her belated honeymoon.

The fashion designer wed millionaire oil heir Mikey Hess in Rome in September, and the couple have booked into the Antipodean five-star Huka Lodge, where a suite can cost £2,965 per person per night.

Mikey, 33, shared this picture of them online after he caught a fish for dinner, captioning it: ‘Honeymoon off to a good start.’ 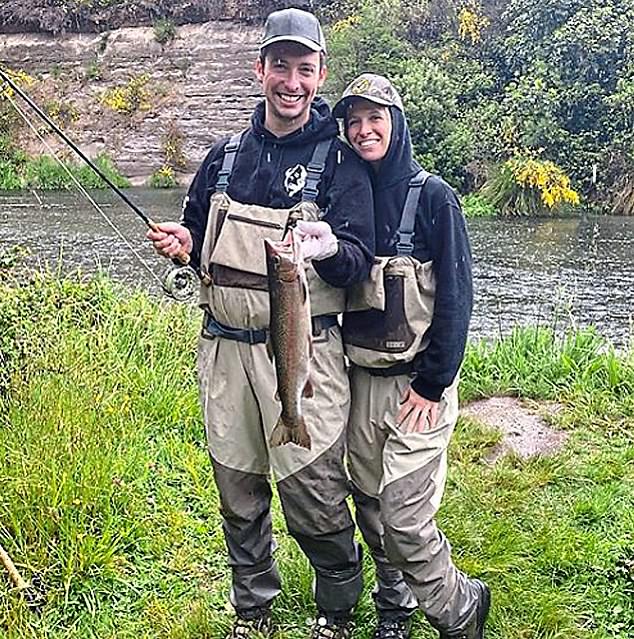 Misha Nonoo, 31, wed millionaire oil heir Mikey Hess in September. Mikey, 33, shared this picture of them online after he caught a fish for dinner, captioning it: ‘Honeymoon off to a good start’

After more than a decade of eroding workers' rights, it's time for a proper new deal

Best cat toys for 2020 to keep your feline friends happy