She achieved global fame playing Daenerys Targaryen, aka the Mother of Dragons, in series Game Of Thrones.

However, Emilia Clarke’s next film could turn out to be the mother of damp squibs.

I can reveal that acclaimed Australian director Phillip Noyce is shocked to discover that his latest movie, Above Suspicion, in which Clarke stars as an FBI informant, is being released in Britain this week under the radar without any advance publicity. 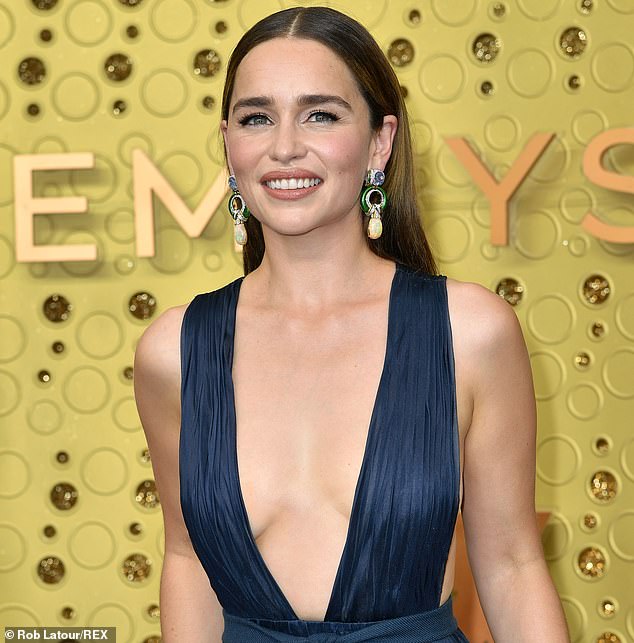 Emilia Clarke (pictured)’s new film, Above Suspicion, is being released in Britain this week 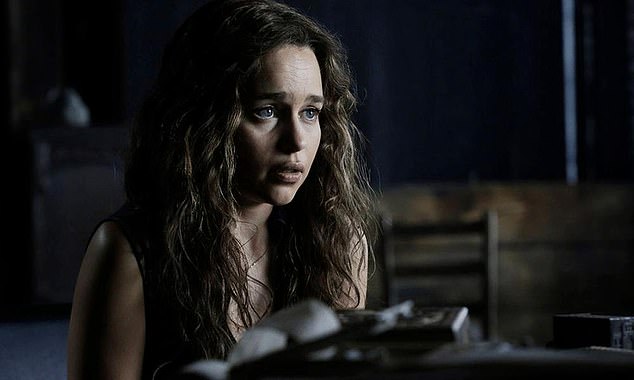 But the movie, in which Clarke stars as an FBI informant, will be put out without any advance publicity this week

Worse still, he complains that he, Clarke and his co-producer Colleen Camp were kept in the dark about the decision to distribute it on digital-only platforms until a few days ago.

They had been hoping for a glizty, red carpet West End premiere, but the Covid pandemic put paid to that.

‘Colleen and I were devastated to discover that our film is about to be released in the UK,’ says Noyce, director of The Quiet American and Dead Calm.

‘The news came on top of discovering, by chance, that the Australian release was also imminent. I myself feel like a parent who has lost a child in the chaos of war.

‘The thought that the movie I’ve loved is not even being respected with the dignity of us all being informed in advance of its release just sickens me. The British digital debut is insulting to all of us. It’s illogical from an artistic, psychological and PR point of view. 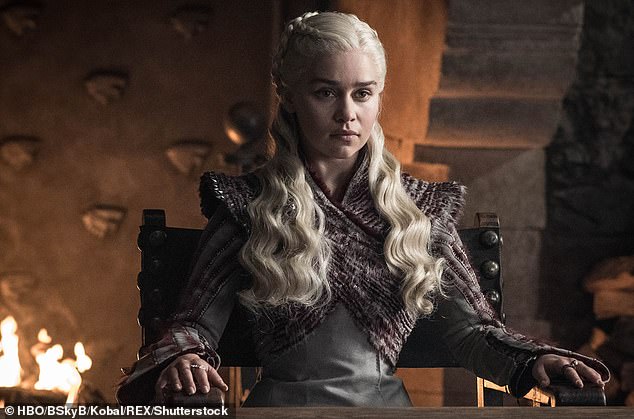 Clarke is best known for portraying Daenerys Targaryen, the Mother of Dragons in the popular Game Of Thrones series

‘Not to try to promote the film’s release in [Emilia Clarke’s] home territory is not smart business for any of us. Obviously in this time of pandemic, streaming is king. But I’m at a loss to understand why no one seems interested in helping the movie to find its audience.’

‘I would assume the decision was made by the distributor, which I guess is a logical choice, if cinemas are closed,’ Noyce tells me.

‘Unfortunately, again maybe due to pandemic-induced chaos, no one associated with the film was informed of UK release plans.’

Sir Rod Stewart’s ex-wife Rachel Hunter reveals she has spent lockdown secluded from the world in an ashram in India.

The former supermodel, 50, now a yogi, who was married to Rod for 16 years, says: ‘I haven’t seen a face that I deeply know for months. I haven’t touched another human for months. This has been an intense observation and one that has been a great teacher. I greatly look forward to that moment to connect.’

All eyes were on Keith Richards when he revealed he’d dyed his greying barnet brown during the Rolling Stones’ U.S. tour last summer.

Now his daughter, Theodora, has been experimenting with her own mane — but with much wackier results. 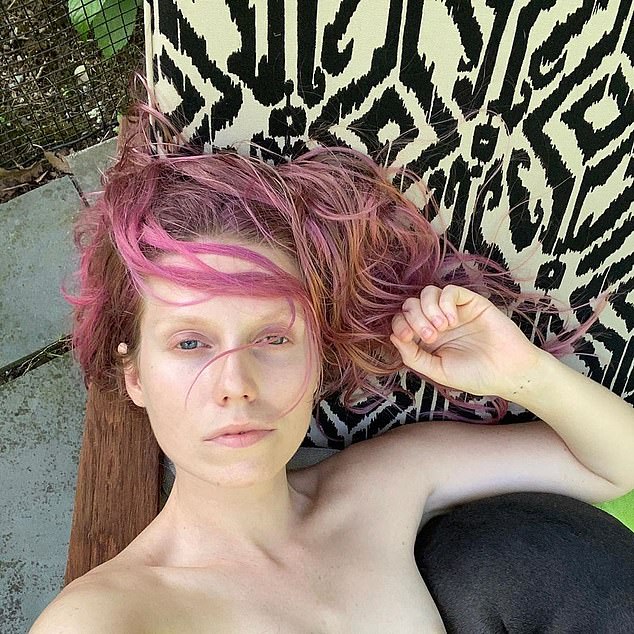 Theodora Richards (pictured) has been experimenting with her in lockdown, calling her new hair colour ‘orchid raspberry creme sundae’

The model, 35, has coloured her blonde locks pink with the help of Sir Mick Jagger’s daughter, Georgia May, whose hair product company, Bleach London, was used in the process.

Theodora showed off her makeover online and described the colour as ‘orchid raspberry creme sundae’.

She must have been relieved to get the stamp of approval from Georgia May, who commented: ‘Loving the pink, Theo!’

Live Aid, which was 35 years ago yesterday, brings back fond memories for Kiki Dee, who came to George Michael’s rescue when his throat tightened up minutes before he was due to take the stage.

‘We were backstage in a trailer when George’s nerves got the better of him just as he was about to go on with Elton,’ says the songstress who duetted with the Rocket Man on their chart-topper Don’t Go Breaking My Heart at the famous 1985 Wembley Stadium concert. ‘I’d always found eating an apple a good way to relax the throat muscles before a gig.

‘So I grabbed an apple from a bowl, handed it to George . . . and, after a few mouthfuls, he relaxed and bounded on stage to sing Don’t Let The Sun Go Down On Me with Elton.’

Wellesley knows how to live the Dolce Vita

As lockdown eases, some of us have wasted no time getting back to business as usual.

For the Duke of Wellington’s niece Eleanor Wellesley, that means resuming her glamorous globetrotting. 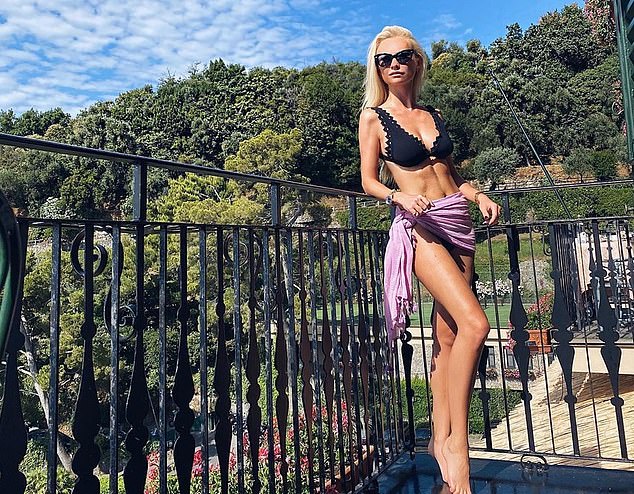 Eleanor Wellesley, the Duke of Wellington’s niece, standing on the balcony of her five-star hotel in Portofino, Italy

First stop, Europe. The 24-year-old daughter of Lord Christopher Wellesley, and cousin of crooner James Blunt’s wife, Sofia, has sparked envy among friends after revealing that she has swapped the Cotswolds — where she was staying during the pandemic — for an ‘Italian road trip’.

She showed off her suntan in a black bikini, teamed with a purple scarf around her waist, while standing on the balcony of her five-star hotel in Portofino.

‘La Dolce Vita,’ she writes online. Lucky for some.

Now that Captain Birdseye is to be played by a woman for the first time in 50 years, the best known of the Scottish Widows models reckons that future adverts should feature a Scottish widower.

Amanda Lamb, who performed the enigmatic role for 11 years, tells me: ‘I would be interested to see a Scottish widower. That would be a great idea. He should still wear the cloak, but I’d like to see him with a beard. Why not? Go for it!

‘The Scottish Widow has always been such an iconic image, but then so has Captain Birdseye.’

Lamb, 47, who went on to present TV shows such as A Place In The Sun and Market Kitchen, adds: ‘We live in a day and age where anything goes.’

Despite retiring from tennis this year, former Wimbledon champion Maria Sharapova proves as competitive as ever.

Not only has the 33-year-old been keeping fit, but she has taken her workouts to a whole new level by sporting colourful ankle and wrist weight bracelets to make her muscles work even harder. 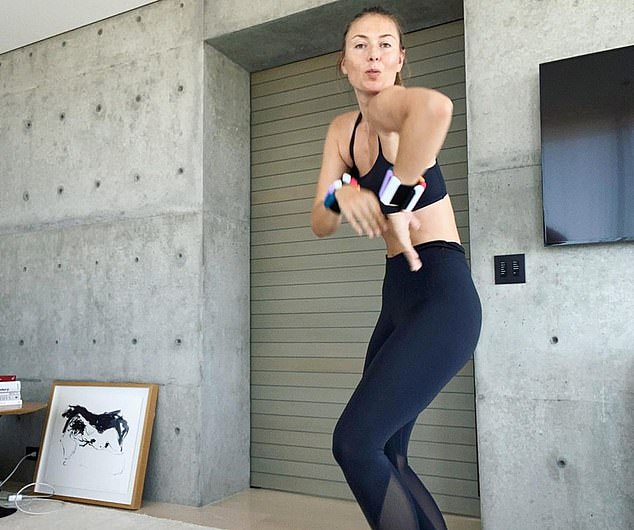 Retired tennis star Maria Sharapova (pictured) shared an image of herself exercising at home in LA, where she lives with her boyfriend

The 6ft 1in blonde shared a picture of herself exercising at home in LA, where she lives with her boyfriend, Old Etonian art dealer Alex Gilkes.

‘Who’s working out with me?’ she teased her followers online.

Alex’s brother, nightclub owner Charlie, responded: ‘I would, but not sure you’d keep up with me.’

The BBC is struggling to resume filming hospital drama Holby City in a time of social distancing.

‘I can’t exactly listen to someone’s heartbeat from two metres away unless I have an incredibly long stethoscope,’ says David Ames, who plays clinical registrar Dominic Copeland.

‘We can’t function without touching the patients, so we’ve got to find a safe way of doing that. There’s a lot involved in making sure the set is safe.’