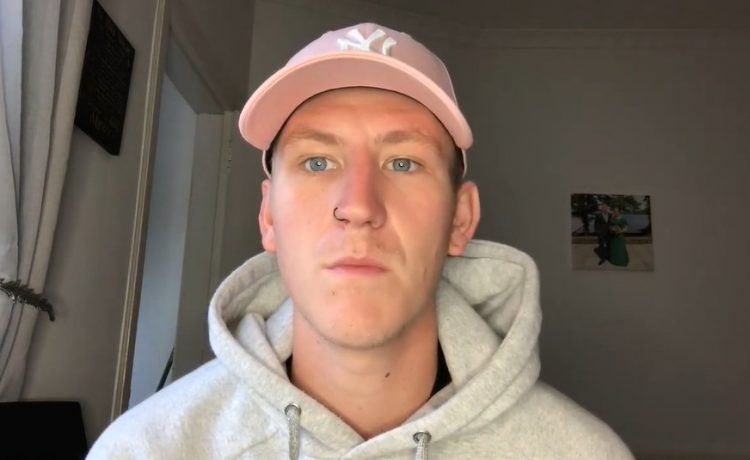 Whatever we thought might happen in 2021, it probably didn’t include a Scottish postman being on the cusp of breaking the charts with a song written by 19th-century sailors.

And yet here we are, as postie Nathan Evans, from Airdrie, Scotland, looks set to beat some of the biggest names in pop with his viral hit, “The Wellerman”.

For those not au fait with TikTok trends, or pre-industrial revolution entertainment, a sea shanty, also known as a chanty, is a type of traditional folk song that was commonly sung to accompany rhythmical labour on board large merchant sailing vessels.

Evans’ 19th-century flashback hasn’t just made him a star, but it’s seen a craze of sea-shantying on TikTok (dubbed ShantyTok).

Everyone from Nickelback to Andrew Lloyd-Webber have followed in his footsteps with their own sea shanty covers, and TikTok is now host to 1.6 billion videos using #seashanty.

When we speak, 26-year-old Evans has sailed in at number two in the mid-week charts.

‘I didn’t even work my notice period’

“The way everything has happened in the last two weeks, it’s crazy, it’s quite overwhelming, it’s literally a dream come true,” he says. “I can’t believe this is my job!”

Evans’ quit his job delivering parcels to the people in Airdrie a week last Friday, and by the Sunday he had signed to record label Polydor for, he reveals, a major three album deal.

“I didn’t even work my notice period,” he confesses. “I explained to them what was happening. But they understood, because that morning I was on Lorraine Kelly’s show, so they knew it was big.”

It was for the best, as his post rounds had been slowed for the numbers of locals excitedly shouting “that’s the man from my phone” as he delivered their mail, he says.

The fortnight of success has seen him pop-up on everything from Good Morning America to Radio 4’s Today programme.

While a new star might get to tour the world during normal times, Evans has had to experience the glare of global internet fame from his aunt’s spare room, which he’s been living in with his wife since last November as they save up for a property of their own.

But internet fame is notoriously short-lived. We never heard again from ‘Alex from Glasto’ (a teen boy who performed a spontaneous rap at the festival) or the Come Dine With Me contestant who told a rival she had “all the grace of a reversing dump truck without any tyres on.”

Will anyone care about sea shanties in three albums’ time?

‘I can make other songs’

He wants to use the tightly held attention to carve out a serious singing career – the job he always dreamed of (though, he admits, he’s happy to be an influencer if it pays the bills).

“The music I write myself, it’s influenced by Ed Sheeran, Lewis Capaldi, Paulo Nutini. They’re the kinds of artists I like and who influences me and who I want to be like in my music.

“But if sea shanties is what people want, and it’s going to put a smile on people’s faces, then I would happily do another sea shanty.”

But he won’t be embracing the sailor’s lifestyle any time soon. Despite being destined to spend his whole life associated with sea shanties, he confesses: “I get seasick, and I’ve not been on a boat or a ferry in god knows how long.”