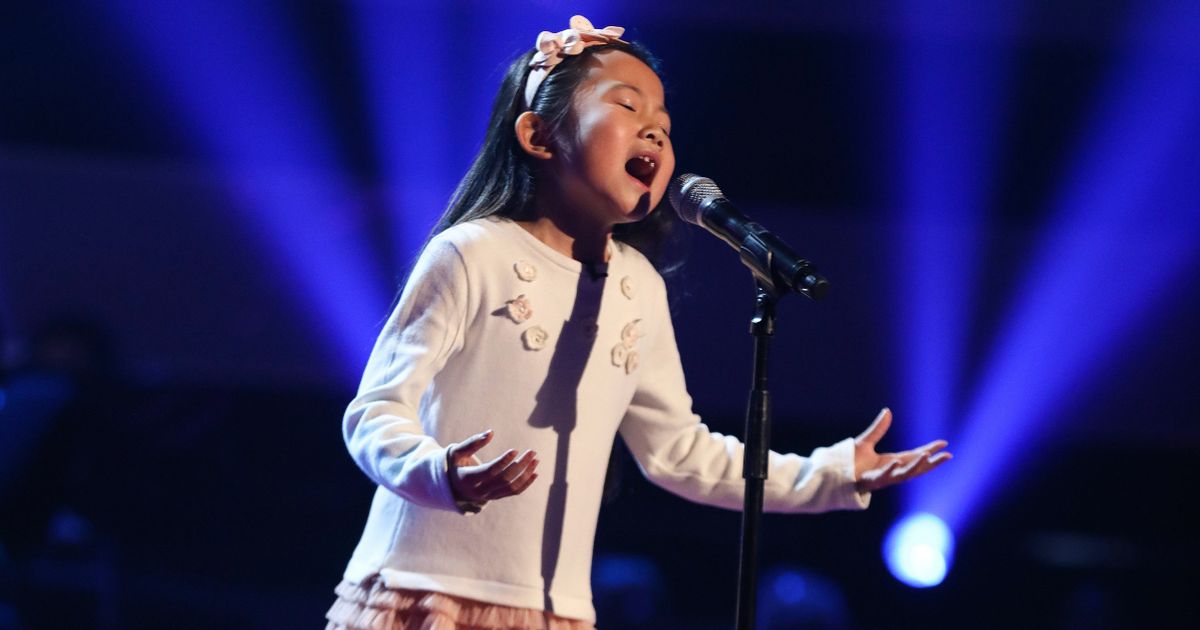 Seven-year-old Scot Peyton Chu is the youngest competitor in this year’s The Voice Kids so it’s no wonder she gets a great reaction from audiences.

And on the ITV show tonight, they give her backing before she even starts singing.

While some parents would be reluctant to put their children on primetime TV with the possibility of being rejected, Peyton’s mum Rowena is happy for her daughter to take her chance.

The 39-year-old, who works as an operations manager for a jeweller, insisted it was Peyton’s choice to do the show.

Rowena, from Glasgow, said: “I’m so proud of her. At first, I wasn’t sure about putting her on TV as you never know what to expect – especially on a singing competition watched by the public. You have to take into consideration their emotions and prepare for any setbacks.

“When the last series of The Voice Kids was on TV, an advert popped up about auditions.

“With Peyton being seven, she was eligible to enter so I asked her if she wanted to try it out. She immediately said, ‘Yes.’”

While her parents were probably more nervous than Peyton on the day of her audition in Manchester, they were also bursting with pride.

Rowena said: “She is still so young and being one of the youngest contestants in the competition, we’re already so proud that she reached this stage. Getting a chair turn and through to the next round would be amazing.

“No matter how far she gets in the competition, we will be so proud.

“Peyton was initially quite nervous but once she got on stage in the studio, she seemed to take it all in her stride.

“It was great fun and such a memorable experience.

“She met lots of lovely kids and it was nice to see them all appreciate each other’s talents.”

Peyton steps on stage to sing Colours of the Wind from Disney film Pocahontas.

She said: “I was a little bit nervous. I’m a huge Disney fan and love singing all Disney princess songs. Colours of the Wind has a nice tune and it suits my voice.

“I am really looking forward to watching my audition. It’s going to be so exciting to see myself on TV. I’m having a house party with my family and close friends.”

If Peyton gets through and one or more of the judges turn round, she will move one step closer to the £30,000 prize fund and a family holiday in Orlando, Florida.

The spin-off show of The Voice UK is open to kids aged between seven and 14 and while Peyton is clearly a wee star who wins over everyone backstage and the audience before she even sings, she’s not too confident about how well she’s going to do.

She said: “I would like to win but I think there are so many good singers so it might be hard.”

She was excited to meet American star Will.i.am and give him a comic book she had created for him.

READ  Katie Price’s ex Alex Adderson coy about her cosmetic surgery: ‘If that’s what she wants to do’

The youngster loves to draw and her favourite cartoon is Captain Underpants.

Peyton said: “I created a picture comic book and made up a story about Will.i.am when he was a little boy.

“It was about him realising his dream of becoming a singer/rapper.

“He took the comic book away to read. It would be amazing if it was published.”

While she hopes Will or Jessie J turn round on The Voice Kids, Peyton would be happy if the other two coaches – Pixie Lott or McFly’s Danny Jones – choose her for their team.

While she is good at both comic books and singing, Peyton is emphatic about what she likes best.

“Singing,” she laughed. “I love singing. I’d love to make an album of all my favourite songs I like to sing to.”

If singing and doing comic books wasn’t enough, Peyton has also been dancing since the age of two and heads to Braga in Portugal on Tuesday to compete in this year’s Dance World Cup.

It sounds like we have a Scots star in the making and Peyton is hoping her musical heroes will watch The Voice Kids and invite her to sing with them.

She said: “My favourite singers are Little Mix. I’ve been to two of their concerts and I’m going this year. It would be a dream if I could meet and sing with them.”

Peyton was supported by Rowena, Rhys and her dad Wils at the Manchester audition.

Rowena, who also liked singing as a child, added: “At 15 months, she was already singing in baby language Twinkle Twinkle.

“She doesn’t stop singing. I am always in awe how she manages to learn new songs within a couple of times hearing it.

“I have had people comment that she’s born for the stage.”

● The Voice Kids is on STV tonight at 8pm.