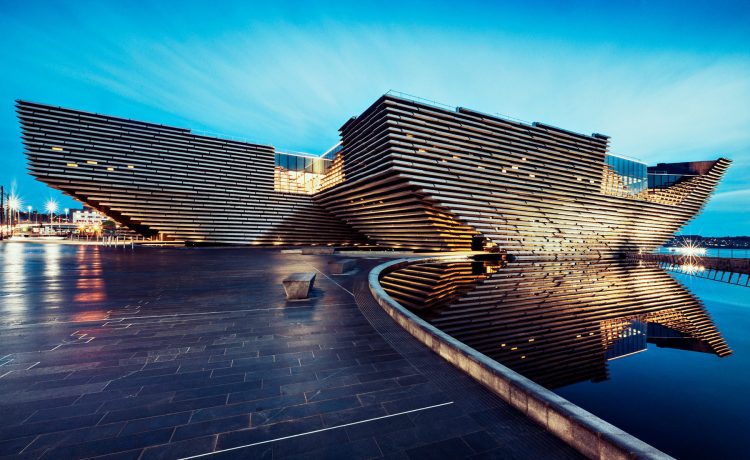 Opened in September 2018, the V&A Dundee has brought both architectural prestige and tourism bucks to Scotland’s fourth-largest city and put a new gloss on its self-appointed nickname – the City of Discovery.

The moniker, of course, refers to the Dundee-built ship of that name, launched in 1901 and used by Scott and Shackleton on their first journey to the Antarctic. But with the opening of the first V&A outpost outside London the name took on other vistas of meaning. Now it means discovering world class design. Discovering what a difference a bold and striking addition to a built environment can make to the look, feel and even morale of a city. Or, at the very least, discovering a new and inspiring place to have lunch or to park yourself and your laptop as you sup a flat white.

At once enigmatic and abstract but also decidedly boat-shaped, the building rises from the waterside in a way that’s quite thrilling to see. There are no straight external walls. It was designed by renowned Japanese architect Kengo Kuma, who won an international competition to land the commission, and it’s his first building in the UK. He has described it as “a living room for the city” though one constructed from concrete – lots and lots of concrete – and 2,500 pre-cast stone panels, intended to resemble an imposing Scottish rock face.

To date the museum’s 1650 square metres of gallery space have played host to a series of blockbuster exhibitions which have together drawn hundreds of thousands of visitors. Hello, Robot: Design Between Humans And Machines looked at how humans and robots have interacted since the dawning of the computer age and, with the advent of artificial intelligence, how much further there is to go on that journey. Meanwhile Videogames: Design/Play/Disrupt dipped into the history of a cultural form to which Dundee has contributed greatly – Rockstar North, makers of iconic games such as Grand Theft Auto, have their origins in Dundee and the city maintains a vibrant digital sector.

The current exhibition is fashion-themed: simply titled Mary Quant it examines the life, work and legacy of the famous 1960s designer. It runs until January 17 although booking is essential, entry slots are timed, and opening hours are reduced. There are also the permanent galleries devoted to Scottish design through the ages.

The fun and sense of discovery isn’t restricted to the inside of the building, however. In one of series of what artists like to call ‘interventions’, the surrounds were made even more appealing to skateboarders than they already are thanks to the addition of ramps. And in the summer a so-called chalkscape was constructed for children to play on as part of Now Accepting Contactless, an exhibition mounted to show responses to the pandemic.

Dundee’s 30-year, £1 billion plan to develop its waterside areas is ongoing. In the V&A Dundee it has made a stunning start.