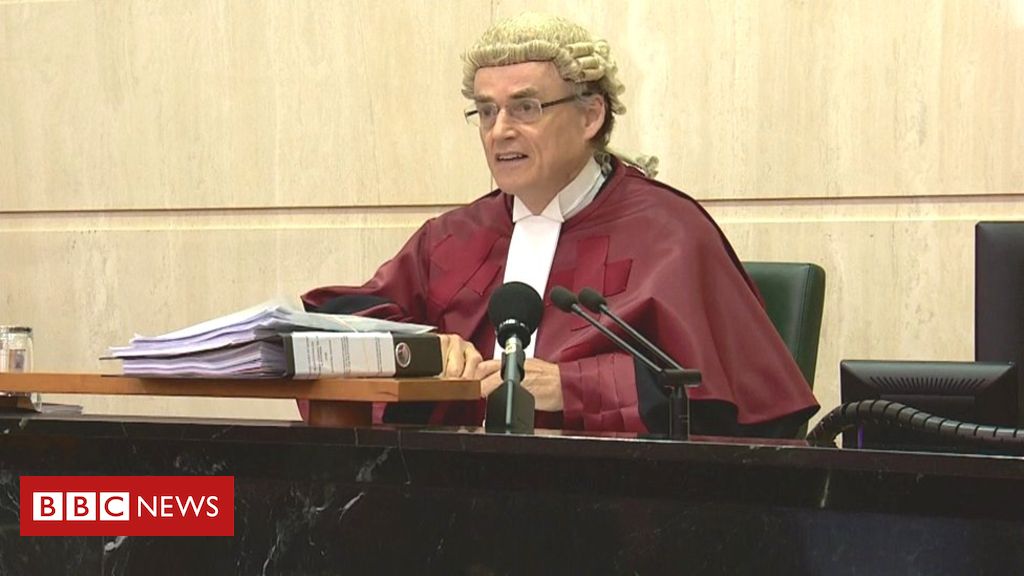 A Scottish judge has retired to consider a legal attempt to block the suspension of the UK Parliament.

Lord Doherty heard arguments from representatives of a cross-party group seeking an interim interdict that would halt the move by the government.

Arguing for the UK government, Roddy Dunlop QC said the issue “was not a matter for the courts”.

The judge will return to give his decision at 10:00 on Friday.

The group of 75 parliamentarians are seeking the Scottish legal equivalent of an injunction to stop parliament being suspended, pending a full hearing on 6 September.

They began legal action at the Court of Session in Edinburgh last month to prevent a Westminster shutdown.

The Queen has already agreed to the prime minister’s request to suspend parliament in September and October.

Boris Johnson has said the Queen’s Speech would then take place on 14 October, to outline his “very exciting agenda” of new legislation.

Critics, however, say that makes it unlikely MPs would have enough time to pass laws to stop a no-deal Brexit happening on 31 October.

Thursday’s session took just under four hours and heard from both sides.

“We do not live in a totalitarian state.”

He went on to argue that the suspension of parliament meant a denial of “political accountability” and was unconstitutional.

He argued that a previous case, involving Telegraph owners the Barclay brothers, saw them successfully challenge the validity of Privy Council advice to the Queen.

Mr O’Neill cited a separate case where, he said, it showed there was an “obligation on the sovereign to recall an order of prorogation” if the court was satisfied there had been an “abuse of power”.

He said an action raised in the Scottish courts was as valid as one raised in any other UK court, giving the example of a Brexit-related court challenge in Northern Ireland.

After the QC quoted the Claim of Right from 1689 – which asserted the sovereignty of the old Scots parliament – Lord Doherty asked if there was a more recent precedent.

Mr O’Neill said there was none that matched the gravity of the present situation.

He went on to argue the parliamentary timetable did not give sufficient time for parliamentary involvement and ratification to happen. On the prime minister’s comments in a TV interview on the subject, Mr O’Neill said “one might call that a lie, and that perhaps is not unexpected”.

The legal challenge is being led by SNP MP Joanna Cherry and Liberal Democrat leader Jo Swinson, aided by Jo Maugham of the Good Law Project.

They want the court to rule that shutting down parliament – known as proroguing – ahead of Brexit would be “both unlawful and unconstitutional” and would have “irreversible legal, constitutional and practical implications for the United Kingdom”.

The government intends to suspend parliament no earlier than Monday 9 September and no later than Thursday 12 September, until Monday 14 October.

Roddy Dunlop QC, representing the UK government, said proroguing was an exercise which the Queen alone could enter into, and was not a matter for the courts.

He cited “classic examples of where the courts would not interfere” on prorogation and dissolving parliament, which he said was an analogous issue.

Mr Dunlop argued that there was a clear convention in the Queen following her government’s advice, and there was a weight of evidence to suggest that such conventions were “non justiciable” – not subject to trial in a court of law.

He said parliament had never had a say in prorogation, that it was “entirely normal” for prorogation to occur and the issue was not for the courts just because the period was longer than in previous years.

Mr Dunlop claimed the parliamentarians were asking the courts to “tread where they are ill-qualified to venture” due to the “intensely political” nature of the issue,

He added there was “no good reason” for the interim interdict, given the full hearing was due to take place next week and “nothing will happen” in relation to prorogation before then.