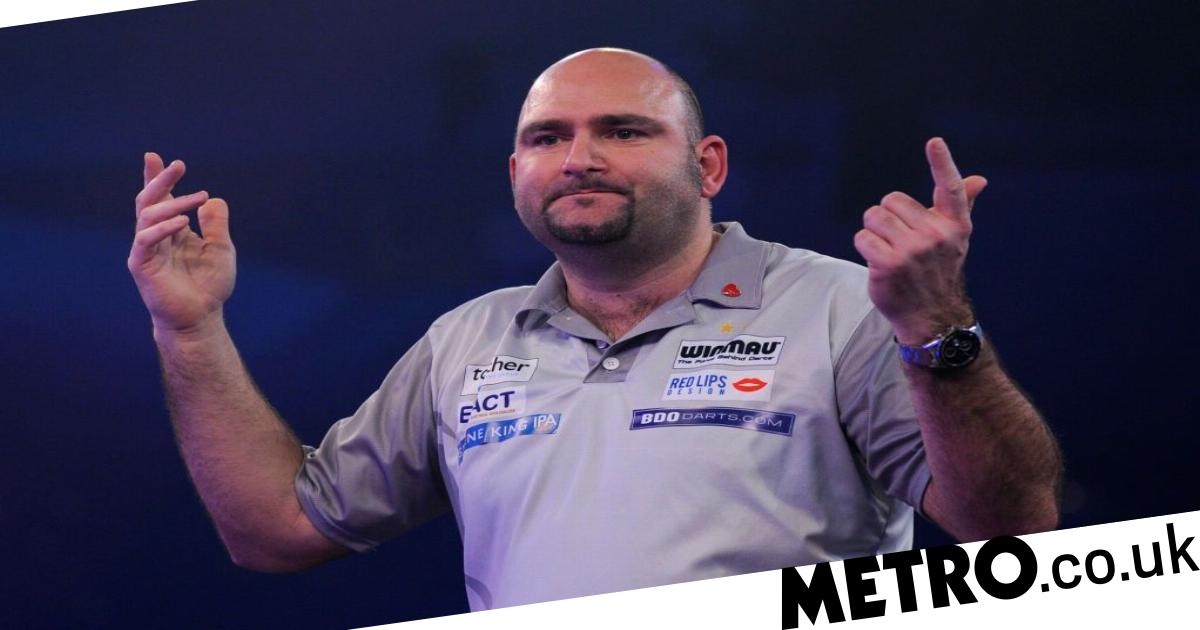 Scott Waites feels he is ready to take his game to new heights after finally giving up full-time work and has some enormous averages in his sights as he looks to make a big impact in the PDC.

The two-time BDO world champion joined the PDC in January after coming through Q School and has made a steady start to life on the big-money side of the darting divide.

There have been some promising performances, not least during his three impressive wins at the UK Open earlier this month, but Waites says we have seen nothing yet.

The Yorkshireman may have handed in his notice when he won his Tour Card in January, but he has been working full-time since then, finally calling it a day this week.

During the coronavirus hiatus, and with work put behind him, Scotty 2 Hotty has all the time he needs to get on the practice board and has great expectations of when he is back in competitive action.

‘It was the last day of my full time job on Wednesday,’ Waites told Metro.co.uk. ‘I gave my notice when I got my tour card and I’ve been waiting for them to take somebody on so I can train them up a little bit.

‘I don’t think I’ve made a bad start to the PDC so far, considering. I’ve got £6,000 so far in prize money, but I’m not getting past the third round of the tour competitions and that’s where the money starts to increase.

‘I’m hoping now I’ve completely stopped work and I can get that little bit more practice in, I can get my average up from around about 100 to maybe 105 which will start help me win some of these third, fourth round games and I can give all those other guys a game.

‘I don’t think I’ve done bad. If you’ve got a job and you’re trying to do this, I don’t think at this sort of level you can keep your job, practice enough and keep the standard going that you need.’

Waites famously won the Grand Slam of Darts in 2010, the only BDO player ever to achieve the feat, so he has plenty of experience of taking on the PDC boys, but it is still taking time to adapt to the big leagues after switching from the BDO.

‘It has been busy to start with, I wouldn’t say it’s been the easiest thing I’ve ever done,’ continued the former world champ. ‘The standard over there is phenomenal, what you see on TV is great, but I would say there’s a better standard of games in the closed off rooms on the ProTours, there’s some silly averages going in.

‘They can all play darts. If you’re not averaging round about 100 you will not win games. I’m losing with 100 averages, coming away thinking I’ve done nothing wrong in that game, thinking I just need a break, but no one’s going to give you a break there because there’s that much money up for grabs.

‘You do expect it, and I’ve been there and I’ve played the majority of the people there before. The difference is, when you’re in the BDO, if you’re a seeded player, you wouldn’t play another seeded player till the last 32 or 16 of a tournament.

‘Odds are you’ll get some guy who’ll average somewhere between 70 and 80 for the first few games, whereas in the PDC, you’re straight in with someone who can average 100, you can get Michael van Gerwen first game.

‘I’ve drawn Darren Webster three times in about seven weekends so far, he’s such an underrated player, and he’s 2-1 up on me now. He was my first opponent when I turned up at the PDC, tough start.’

Job number one for Waites now he has time at home is to get a proper practice area set up, because he had been used to playing elsewhere, with his only board at home precariously placed on a glass door.

‘I just need to get a permanent dartboard up now because I’ve had a temporary one up till,’ Waited explained,

‘I normally go out practicing with somebody else. I’m quite lucky because I’ve got three or four guys of decent standard that’ll go out and have a game of darts whenever I want. I’ve got Devon Petersen in Bradford, who’s pestering me like mad, but we can’t really meet up at the minute. Joe [Cullen] lives down the road from me as well, but he’s a bit slack, he doesn’t like practicing much.

‘It’s trickier than you’d think to get a board up. In my living room I’ve got a picture rail all the way round so can’t do it there. I could probably do it in my kitchen but as long as I don’t get a loose dart through me fish tank.

‘I’ve had one up on one of me internal glass doors, but that’s got to go now, that’s not practical. So it’s kitchen and the fish are in trouble or the hallway.’

After a long stint in the BDO, which saw Scott enjoy so much success, he was delighted to get out when he did, with the organisation going through a dramatic decline over the last 18 months.

‘I had a go at Q School last year and didn’t get a card,’ said the 43-year-old. ‘I played on the Challenge Tour a bit last year.

‘You could see over the last 12 months the demise of the BDO. Our rankings tournaments weren’t on TV.

‘The World Masters was our second biggest tournament, that was bad. The World Trophy seemed to go by the wayside, with 50 spectators in the room, including players.

‘It wasn’t the same, they weren’t making any effort to make it any better. Luckily enough I played well for the last day at Q School, managed to win the day and get the Tour Card, which is probably one of the best things I’ve ever done.

‘Everyone’s fighting for their lives there, if you’re out, you’re out. It can really make or break your life.’

The coronavirus sport hiatus has seen competitive darts wiped out until May, although it looks likely the wait will go on past then for more action on the oche.

Having worked throughout his darting career to date, it is an unfortunate time for Waites to give up the day job just as the arrows goes on hold, but he is getting ready for a very busy period when tournaments start being played again.

‘I just wish this coronavirus was coming in January because I’d have left my job open,’ Scotty 2 Hotty said. ‘I know I’d have been at home like I am now, but at least someone else would have been paying my bills. It’s probably too complicated to just go back for a bit.

‘I’ve still got a few sponsors that will help pay the bills in between, but ultimately if I’m not paying competitive darts, the proper money isn’t starting at the minute.

‘I’m quite sure Barry Hearn will get something sorted soon and I firmly expect everything will be midweek and at weekends, it’s going to be a busy six months when we’re back!

‘I think you’ll be able to tell who has been practicing or not during the break.’

MORE: More Premier League Darts postponements as PDC calendar wiped out until May

READ  Deontay Wilder responds to George Foreman’s offer to train him for Tyson Fury rematch
Share on FacebookShare on TwitterShare on PinterestShare on Reddit
newsgrooveMarch 28, 2020