Scientists may have detected an example of an entirely new class of black hole — one that is smaller than any previously known.

Black holes are often found in so-called binary systems, where two stars once orbited around each other, until one ran out of fuel and exploded.

These ‘supernova’ explosions either leave behind a dense core called a neutron star, or — if there is enough mass — a black hole so dense not even light can escape it.

However, there was a gap between the densest known neutron star and the least massive known black hole from which no neutron stars or black holes were known.

Experts scoured data on 100,000 binary star systems until they found one with an unusually small black hole — only 3.3 times the Sun’s mass.

The find may help physicists understand the black hole-forming supernova process— which is key to the formation of certain elements and the universe’s evolution. 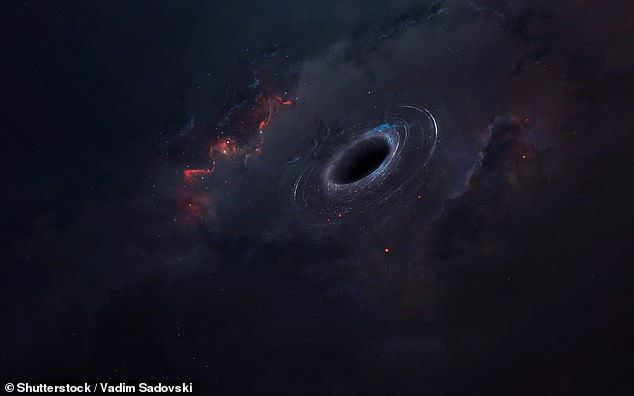 Scientists may have detected an example of an entirely new class of black hole — one that is smaller than any previously known. Pictured, an artist’s impression of a black hole

Astrophysicist Todd Thompson of the Ohio State University and colleagues analysed data collected by the so-called Apache Point Observatory Galactic Evolution Experiment on the light coming from around 100,000 stars in the Milky Way.

Changes in the light spectra from stars can indicate that a star is orbiting around another, possibly unseen, object like a black hole.

Hunting for stars that could potentially have a neighbouring black hole, the team narrowed down on 200 that appeared to be of particular interest.

From this, they were able to compile thousands of images of each of these star system captured by the 20 robotic telescopes that make up Ohio State’s All-Sky Automated Survey for Supernovae program.

One star system stood out. Dubbed ‘J05215658’, this giant red star appears to be orbiting a massive, hidden body some 3.3 times the mass of the Sun — much smaller than any black hole previously known to science.

‘What we’ve done here is come up with a new way to search for black holes, but we’ve also potentially identified one of the first of a new class of low-mass black holes that astronomers hadn’t previously known about,’ said Professor Thompson.

Professor Thompson compares the search for black holes to date with a census that only counted people over 5 feet 9 inches in height — leaving experts with an incomplete understanding of the overall population.

As it stood, scientists had for a long time only been aware of black holes that had masses between 5–15 times that of the Sun’s mass.

Meanwhile, neutron stars — the cool, dense, other possible product of a star going supernova — have only been found with around 2.1 times the Sun’s mass.

Were neutron stars to reach more than 2.5 times the Sun’s mass, they would themselves collapse to form a black hole.

This left a gap in the lower end of possible masses for black holes that had not been seen in reality — until Professor Thompson and colleagues identified J05215658. 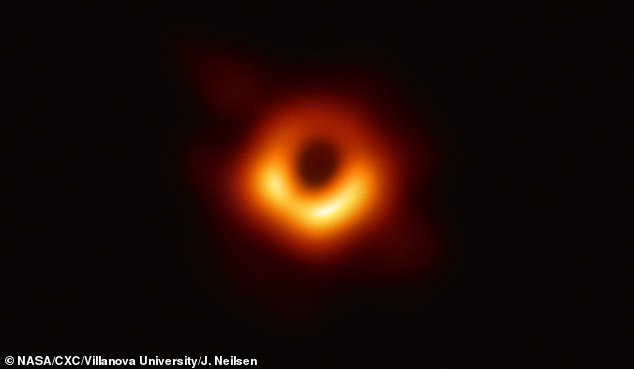 Experts scoured data on 100,000 binary star systems until they found one with an unusually small black hole — only 3.3 times the Sun’s mass. Pictured, the supermassive black hole at the heart of the galaxy Messier 87, which was imaged by the the Event Horizon Telescope in April

‘We’re showing this hint that there is another population out there that we have yet to really probe in the search for black holes,’ said Professor Thompson.

‘It opens up a new area of study.’ 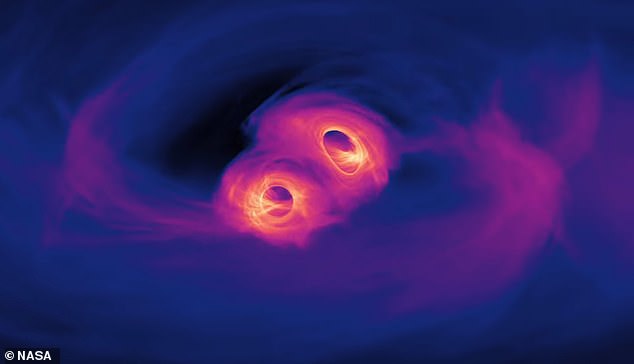 The finding compliments the observation in 2017 of two ‘giant’ black holes — one 31 times the mass of the Sun, the other 25 times — that were merging together in a galaxy around 1.8 million light years away from the Earth

The finding compliments the observation in 2017 of two ‘giant’ black holes — one 31 times the mass of the Sun, the other 25 times — that were merging together in a galaxy around 1.8 million light years away from the Earth.

The observation was made by the Laser Interferometer Gravitational-Wave Observatory (LIGO), which is comprised of two telescopes based in Hanford, Washington State and Livingston, Louisiana in the US.

‘Immediately, everyone was like “wow”, because it was such a spectacular thing,’ said Professor Thompson.

‘Not only because it proved that LIGO worked, but because the masses were huge. Black holes that size are a big deal — we hadn’t seen them before.’

The full findings of the study were published in the journal Science.

WHAT’S INSIDE A BLACK HOLE?

Black holes are strange objects in the universe that get their name from the fact that nothing can escape their gravity, not even light.

If you venture too close and cross the so-called event horizon, the point from which no light can escape, you will also be trapped or destroyed.

For small black holes, you would never survive such a close approach anyway.

The tidal forces close to the event horizon are enough to stretch any matter until it’s just a string of atoms, in a process physicists call ‘spaghettification’.

But for large black holes, like the supermassive objects at the cores of galaxies like the Milky Way, which weigh tens of millions if not billions of times the mass of a star, crossing the event horizon would be uneventful.

Because it should be possible to survive the transition from our world to the black hole world, physicists and mathematicians have long wondered what that world would look like.

They have turned to Einstein’s equations of general relativity to predict the world inside a black hole.

These equations work well until an observer reaches the centre or singularity, where, in theoretical calculations, the curvature of space-time becomes infinite.