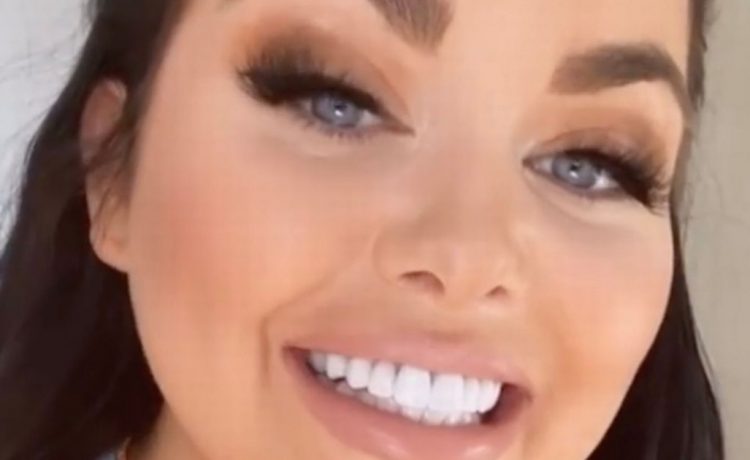 Scarlett Moffatt was over the moon to show off her new teeth after finally having her veneers replaced over the weekend.

The 30-year-old former Gogglebox star admitted to fans that she feels like she can “finally smile” after her previous set of teeth began to move out of place.

Addressing her 2 million Instagram followers on Sunday, Scarlett shared a candid post in which she explained why she had undergone the procedure.

Alongside a montage of old snaps, the reality TV star revealed that she had been “picked on” when she was younger after she smashed her teeth during a bike accident.

She then had veneers fitted, however, they had recently moved out of place and left Scarlett with a gap in her teeth.

Alongside Sunday’s montage of snaps, Scarlett narrated the clip as she opened up about her recent dental transformation.

“So this is the story of little Scarlett. So as a kid, school wasn’t really easy,” she said.

“One of the big things I used to get picked on was my teeth because I was in a bike accident when I was little and smashed my two front teeth.”

Scarlett added: “This unfortunately carried on into adulthood, being in the public eye sometimes isn’t fun.”

She then pointed out the gap in her teeth alongside a snap of her beaming from ear to ear.

Scarlett continued: “This is me finding out that on June 21st we might finally be free. You can see the little gap in my teeth,” the picture shows her overjoyed and celebrating with her mouth open.

“So I went to Queensway and… this happened! I feel like I can finally smile. I’m so excited.”

Alongside the post, Scarlett thanked her dentist and also hit back at those who had bullied her.

Scarlett wrote: “Bullies are like sandpaper the more they wear you down the more polished you become. I have done this for me, not them and now thanks to @queenswaysmiles & @queenswaylab I don’t think I’ll ever stop smiling. #smile #love #happy.”

Scarlett was quickly inundated with messages from fans as they flocked to compliment the star on her new smile.

“Look gorge with and without the gap bab! Glad ur happy with em! ” penned one follower.

“You are a beautiful soul inside and out,” added a second.

A third wrote: “Your new teeth are lovely but so were your old ones! It’s YOU that makes you a beautiful person.”

Scarlett’s latest post came after she joked on social media that she had been “mistaken for Madonna” after her original veneers began to move, leaving her with a gap.

Earlier in February, the television presenter tried to look at the funny side of her dental issue by comparing herself to the Queen of Pop.

“My old one started moving and I had a gap – people started to mistake me for Madonna,” she joked at the time.

“There’s only one Madonna, so I’ll stick to being Scarlett Moffatt,” she added.

Do you have a story to sell? Get in touch with us at webcelebs@trinitymirror.com or call us direct 0207 29 3303