Phones with foldable displays are shaping up to be more than just a fad.

In an annual developers conference on Monday, Samsung teased what appears to be an immediate successor to its innovative new Galaxy Fold – a nearly $2,000 phone with a bendable display.

As reported by The Verge, Samsung’s research and development team foreshadowed the unnamed device on stage Monday, teasing what appears to be a phone that bends vertically like a clam shell as opposed to horizontally like a book.

‘This brand-new form factor that we’re now exploring will not only easily fit in your pocket, but it also changes the way you use your phone,’ said Hyesoon Jeong, head of Samsung’s framework R&D group at the conference according to The Verge.

Samsung reportedly stopped short of mentioning any specifics on the intriguing new concept, leaving its name, specs, and stage of development a mystery.

Equally as mysterious is whether the company has even advanced folding technology to a sophisticated enough level to pull the design off.

Samsung’s only other collapsible device, the Galaxy Fold, has encountered myriad problems since being introduced earlier this year.

Notably, the phone encountered several problems with its display that caused its screen to deform or in some cases, become completely unusable.

Since then, however, Samsung seems to have successfully corrected the Fold’s course, releasing the device to consumers last month – whether a new design will dispense with the phone’s issues should be revealed with time.

Whether Samsung’s new phone will ever hit the market may be an open question, but widespread interest in building phones with folding displays has crystallized throughout the last year.

In addition to companies like Huawei – the only other phone manufacturer to release a folding phone – relative newcomers to the world of high-end smart phones like TCL have also begun to stake their claim.

A recent prototype sent out by the company showcases a device with multiple hinges, that bend to form a ‘Z’ shape and extend into a 10-inch display when fully opened. 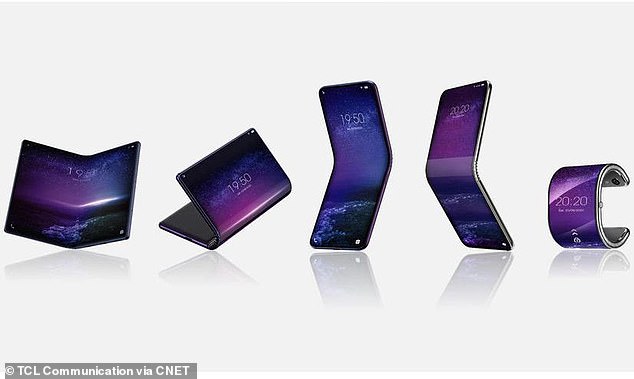 Chinese tech giant TCL, which acquired the BlackBerry brand in 2016, is developing a flexible phone that can bend around your wrist to become a pseudo-smartwatch

When collapsed the phone folds onto itself to configure the device into a book-like shape with one, slimmer, outward facing display.

The company has reportedly been in the process of developing various other foldable devices including a type bending wearable.

Nasa reveals the strange shape of our solar system