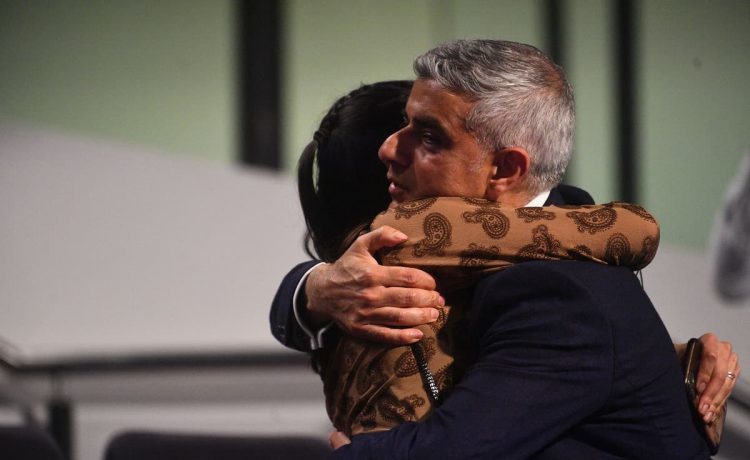 Labour incumbent Mr Khan polled 1,206,034 votes – the second highest total in the history of the London mayoralty – compared with 977,601 for his Tory challenger.

This gave Mr Khan a majority of 228,433, again the second highest on record. Mr Khan holds the records for most votes (1,310,143) and biggest winning majority (315,529) from his inaugural victory in 2016 against Tory candidate Zac Goldsmith.

The vote-counting went to a second round run-off after no candidate managed to secure 50 per cent of the votes after first preferences were counted.

Mr Khan will serve a further three years, the normal four year term shortened due to the election having been delayed by a year due to the covid pandemic.

In a combative victory address, he said he was “deeply humbled” to be re-elected and proud to have won an “overwhelming mandate”.

But he said the other elections across the UK showed the country was “deeply divided” since Brexit, covid and the “culture wars”.

He said London would only defeat Covid by “working together” to build a “bigger and brighter future”.

He promised to build “bridges across cultural social and class divides” and vowed to ensure that London played its part in pandemic recovery.

Mr Bailey congratulated all the candidates for their campaigns and made a point of generously congratulating Mr Khan. “Well done, Sadiq,” he said. “I’m genuine in that.”

He said he had felt “written off” by journalists, pollsters and politicians during the campaign but thanked Londoners for giving him a chance.

He said he was pleased to shine a light on issues such as affordable housing and thanked his family.

“All of this is only possible because of my mum,” he said.

“This has been a long road but I have enjoyed every minute of it,” he added.

It was announced Mr Khan had won a second term at 11pm on Saturday, amid earlier suggestions that the declaration would be delayed until Sunday.

The result will be a glimmer of hope to the Labour Party after it received a drubbing in local elections in England losing control of a host of councils and a humiliating defeat in the Hartlepool by-election.

Mr Khan was first elected mayor of the capital in 2016 in a landslide victory, breaking the Conservatives’ eight-year hold on City Hall.

After the result was announced he tweeted: “Thank you London. It’s the absolute honour of my life to serve the city I love for another three years.

“I’ll leave no stone unturned to get our city back on its feet. A brighter future is possible, and we’ll deliver it together.”

Tonight’s result comes after a race that was overshadowed first by covid and then the death of the Duke of Edinburgh.

Mr Khan had been the favourite from the outset, with some pollsters predicting he could deliver a historic first-round landslide.

That never materialised, with Mr Bailey polling more strongly than expected, and often outperforming the Tory party candidate in some of the London Assembly constituencies.

The City Hall elections ask Londoners to vote at the same time for a mayor and the 25 members of the assembly.

Professor Tony Travers, of the London School of Economics, said Mr Bailey’s poll result had been a “personal triumph”.

He said: “The Tories have gained ground but Shaun Bailey has done better than the Conservative party almost everywhere.

“It’s a personal triumph, especially as the Conservative party more or less abandoned him. Perhaps his authenticity shone through.”

There had been drama on Friday evening, mid-way into two days of counting, when Mr Bailey took an early lead after the first four of 14 constituencies declared, sending social media into a tailspin.

But by the end of Friday night Mr Khan was ahead by about 25,000 votes. He further consolidated his lead as more results arrived throughout Saturday.

Mr Khan was virtually guaranteed a second term around 5pm on Saturday after holding Barnet and Camden, a marginal seat which had to swing decisively to Mr Bailey to give theTory any hope of a comeback.

Mr Khan also scored a big win in the Labour heartland of Greenwich and Lewisham and was almost 17,000 votes ahead of Mr Bailey in Merton and Wandsworth.

Mr Bailey had to wait until 8pm to score his first victory of the day, in Croydon and Sutton.

The votes received in all 14 constituences are added up to determine the winner.

Earlier this afternoon, Mr Khan opened up a five point lead over Shaun Bailey, which he held for the remainder of the day.

Counting resumed today at 8am.

By 11am, Mr Khan was ahead in five of the seven remaining constituencies and had an overall lead of 40 per cent to 36 per cent for Mr Bailey.

The final 11 assembly seats, which are determined according to a complex proportional representation formula based on party support across London, were also due to be announced tonight.