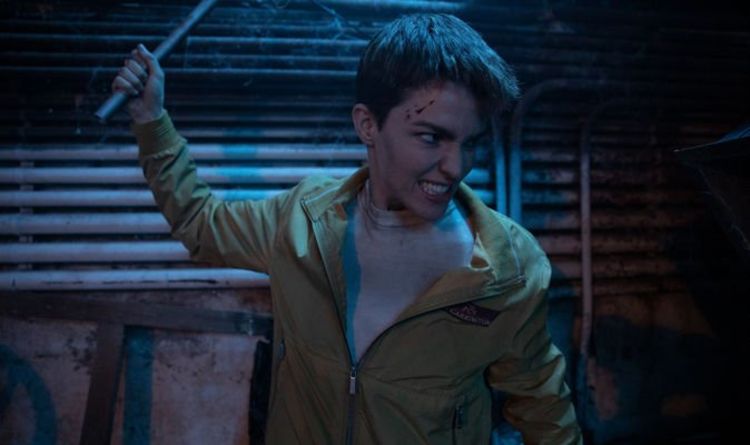 Ruby Rose became well-known almost overnight when she arrived on Netflix show Orange is the New Black as the powerful Stella Carlin. It didn’t take long for the Australian actor to find her feet in a slew of action movies, such as Resident Evil: The Final Chapter, and the John Wick franchise. Most recently, Rose appears as Ali in The Doorman – a former marine down on her luck who is looking for some honest work. After finding a job at a local hotel as a doorman, she stumbles upon an organised crime syndicate looking to cause a whole lot of trouble. Although the film is still packed full of the thrilling stunts and fight sequences her fans might expect, Rose explained to Express.co.uk that her role is a “fully-fledged character” – something that is rare of a female role.

Rose explained: “I think the first thing that attracted me about the script [for The Doorman] was there’s a strong female lead, that’s kicking as much a**e as the male counterparts.

“You can get opportunities where you read scripts and there’s a male lead in an action film, and you can play a great sidekick, or sister, or love interest – but this is really predominantly the woman.

“And Ali in The Doorman has a whole story, a backstory, she’s a fully-fledged character. She’s layered and complex, and she has a family and she has trauma and things that they don’t usually always allow in female action scripts.”

In the film, Ali struggles to come to terms with her rapidly changing lifestyle – from an always-working, always-fighting marine, to a civilian with almost nothing to her name.

Oddly enough, this seems to be the sheer opposite of Rose’s situation, as she explained how she wants to break out of the acting mould she has built for herself, in a way.

She revealed: “When you enjoy doing a particular genre of film – one that you’re particularly good at or when people like you in that kind of role – you always run the risk that that’s what you will repeat.

“So I think people might have the assumption that that’s all I have to give or that’s all I want to give, and as much as I enjoy it, I’m still looking for the human in that genre.”

The Doorman promotes working through tough times, and connecting one-to-one with people – between flying fists and bullet dodges.

“I think that there’s so many plot aspects to the story,” Rose went on. “But I really think at the heart of it, and what it’s really about is human connection.

“I mean, Ali, it takes hitting rock bottom for someone to come in and just say, here’s my hand, to help her out of the situation. For her to realise she’s not alone.

“And every human connection that she has after that, you see a change and a shift in her. Ali is complex and has been through a lot and carries that trauma, that’s something that’s new for me to be able to play, which is really nice.”

Rose battles against another action hero, Jean Reno, who is best known for his roles in Mission: Impossible, The Pink Panther, and Léon: The Professional.

Reno plays Victor Dubois, a crime boss looking for a valuable painting within the hotel.

Although he could go about his business safely, he instead brings a team of warriors to help him do his dirty work, prompting Ali to step in.

The Doorman is available on Digital Download now and on DVD from January 25 – from Lionsgate.