Indeed it being “that time of year”, at last night’s sell-out London show the 47-year-old rocker was nursing a sore throat. With two dates left of the UK leg of his tour, at points during his set his famous Mancunian drawl sounded as if it were about to give up. “Don’t be saying I’ve been doing the cocaine. That’s tomorrow night,” he joked.

Some singers would have postponed. And I’ve watched several walk off half way through a show when their voice wasn’t playing ball.

But Liam didn’t need to, as the crowd sang for him.

But as a Mancunian whose teens were set to a soundtrack of Oasis, Liam could have come out and played Wonderwall on his iPhone and I’d still think he was the coolest man alive.

He started off strong, coming out as ever to Rock ‘n’ Roll Star, flanked by Oasis member Bonehead on guitar, before playing Halo and Wall of Glass.

The moment the music started, cups of what I hope was beer began to fly through the air and the man in front of me lit up a cigarette.

“I don’t like those people who come out and do nostalgic tours with no new music. I think they’re c***s,” said Liam.

And indeed his set was new music heavy.

His second solo album, which was released in September to pretty good reviews, deserves to be played.

Singles Once and Shockwave went down well.

A couple of others received a slightly subdued reaction from those in the crowd who were clearly waiting to be gifted the album for Christmas to listen to it.

It was a nice touch when later in the set “our kid”, Liam’s 17-year-old son Gene, came out on stage to play the drums during The River.

For Gas Panic!, Liam then joined him on the bongos.

Then, towards the end of the set came the The Oasis Segment.

Clambering to get a better view, thighs began to crush into the shoulders that held them aloft. Giant mosh pits swirled.

“You’re going to have to help me out,” said Liam as, with his raincoat hood up over his eyes, he stood back and let the crowd sing Wonderwall back at him.

Much to the crowds delight, those that were compos mentis to realise what was going on anyway, he then played an encore of Acquiesce, Roll With It, Supersonic and Champagne Supernova.

A second encore then brought the Mancunian karaoke to a close with Cigarettes & Alcohol.

The songs, so iconic, have a life of their own. They were still being sung as the crowd dispersed into the rainy night. 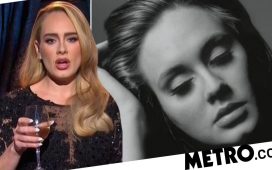