River City star Sean Connor has said a tearful farewell to show following the latest episode – and fans are worried that another two of their favourites may have left.

Actor Sean Connor, alongside David Paisley and Charlene Boyd all appear to have made an exit from the soap after the latest episodes.

Sean, who plays Dylan in the soap based in fictional Shieldinch, took to his social media to bid farewell to the show after two years.

He wrote: “To my cast, crew and everyone else involved in production from top to bottom, it’s been an absolute privilege to work with and learn from you all.

“People sometimes don’t recognise the hard work that goes into making River City, and they should. I’ve been a very lucky boy.

One said: “Oh no. So sad to see you go. You are one of my favourite characters. Good luck with whatever you do in the future x”

Another added: “Pure gutted, you’re my wee fave on there.”

Of course it might just be a dramatic storyline, but fans online are fearing the worst.

Someone else replied: “What’s happening in River City everyone leaving ?”

Another said: “Never mind the football. What an episode of river city. It was like a mass exodus. Rory and Paul. Cammy (and possibly Dillan) And pc jacq Dunn all left. X”

And another remarked: “Another one of the regular mini cast clearouts, I see? A pity, in particular, to see the highly impressive @CharleneBoyd1 take her leave. Terrific actress, I hope she can make a return at some point.”

River City is taking a break for the summer and will return in August so we will al have to wait and see. 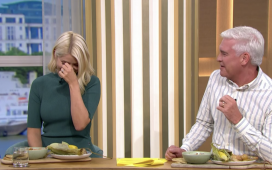