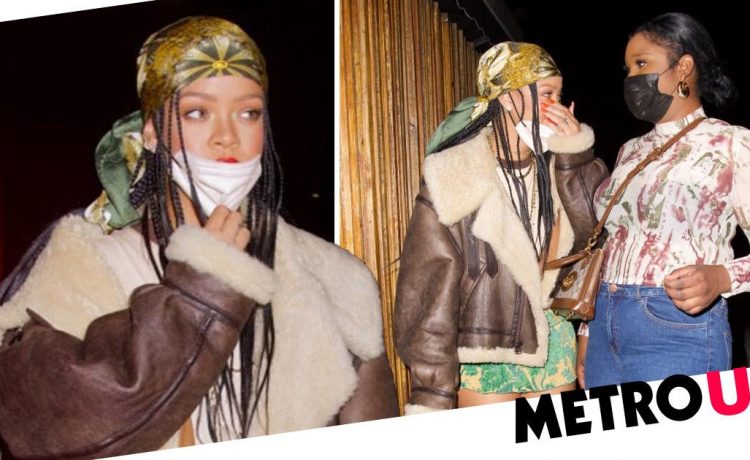 Rihanna was dressed for all weather she arrived for a midnight dinner at The Nice Guy restaurant in Los Angeles on Saturday.

The singer, 33, wore a green and yellow miniskirt as she confidently strode into the establishment.

She kept her arms covered in a bid to protect herself from the cool night air as she wore a brown leather jacket.

The Barbadian star had a gold and black scarf on her head as she kept her face covered with a white mask to keep herself and others safe from coronavirus.

The Umbrella warbler was joined by a female friend this weekend but she was recently spotted out in New York at the same time as rapper A$AP Rocky, fuelling rumours the pair are dating.

Although restaurants in the city are currently allowed to open until 11pm, the pair left the venue separately around 2am according to reports, to avoid being photographed together.

They are yet to comment on rumours they may be dating, which began to circulate last year.

Rihanna and A$AP have known each other since at least 2012 when they worked on the remix of her song Cockiness together, but sources claimed their relationship recently turned romantic.

Speculation that the pair might be an item started in January 2020 after Rihanna split from her long-term boyfriend Hassan Jameel after three years of dating.

A$AP and Rihanna were then spotted together on various occasions throughout the year, with the singer even enlisting A$AP for promo shots for her Fenty Skin range last August.

Things appeared to get more serious at the end of the year as the rumoured couple were snapped together on Christmas Eve in Barbados, with sources claiming that A$AP spent the holiday with Rihanna and her family in her hometown.

A source told Entertainment Tonight at the time: ‘They’ve known each other for so long as friends and in a work setting, which makes it so easy for them to get along, travel together and be involved in each other’s lives to the full extent.

‘They always have such a good time together and definitely seem in love.’

READ  Justin Bieber was just playing – he thinks Tom Cruise would ‘whup his ass with his dad strength’ anyway
Share on FacebookShare on TwitterShare on PinterestShare on Reddit
newsgrooveApril 11, 2021