Rihanna fans were left shook after the singer confirmed she’s been living in London for a whole year during a recent interview.

And now it’s been revealed that the singer has been dropping a cool £16,000 a week to rent out a North London mansion over the past 12 months.

According to the MailOnline, the Diamonds hitmaker has been living in a seven bedroom mansion that’s worth a whopping £30 million.

We guess she made her message clear with the single, B**** Better Have My Money, cause Riri has money to blow these days!

Plus the four-storey property comes with an open plan kitchen, a reception room and a family room, as well as five bathrooms and two studies.

And a source tells the publication that the home has everything the singer turned mega-mogul needs.

‘It has seven bedrooms for her team. It’s in a very exclusive area with some very wealthy neighbours so she can come and go as she pleases and nobody really takes any notice,’ the insider explained.

‘She’s been there for a year, but has enjoyed living there so much it looks like she’ll be there for longer.’

Riri has given fans teeny glimpses into her London home through photos and videos she has shared from her house on Instagram. But that’s all we’re getting for now.

The singer made the big move from the US to the UK earlier this year, which completely explains the Sainsbury’s bag fans spotted in her recent Instagram Story the other day!

In her interview with the New York Times, Rihanna revealed that she’s now living in London to be closer to her Fenty team who are based in Paris and Italy where the products are manufactured.

But it probably also helps that her boyfriend, Hassan Jameel, lives here too.

The 31-year-old told the publication that one of the things she appreciates most about living in the Big Smoke, is ‘walking around the block’.

When the reporter revealed their surprise considering they had to shut down part of Shoreditch for the interview, the singer admitted: ‘No. This is not a regular day in London. It’s a bank holiday. Everyone’s out. It’s insane.’

She added: ‘When I go walking, I try to keep it a little incognito.’

MORE: Rihanna dancing to Beyonce at Fenty launch and admiring her ‘big butt’ is a whole mood 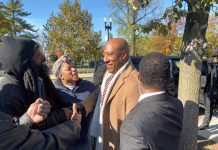