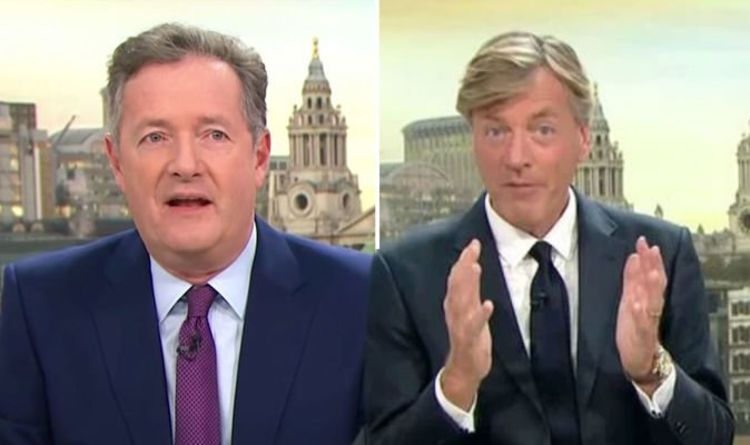 Richard Madeley, 65, is the bookies favourite to replace Piers Morgan, 56, on Good Morning Britain following his departure from the show in March. While a permanent new host is yet to be revealed, fans have called for Richard to join the show alongside main anchor Susanna Reid.

Taking to Twitter, the journalist apologised as he announced he will be returning to the ITV morning show on Thursday.

In view of his 212,000 followers, he wrote: ”Not one, not two, but three early morning alarms by my bed tonight – back on guest co-hosting duties with Good Morning Britain tomorrow (Thursday).”

One commented: “Will be a pleasure to wake up to you Richard, can’t bear GMTV at the moment but could switch on knowing you are presenting.”

A second added: “Wish that you were presenting permanently Richard.”

“Love you on GMB. Can you cope with the early mornings permanently? Just saying,” a third commented.

Richard said he is yet to be asked to replace Piers, but would be open for a chat about the position.

He has, however, said he prefers to be a stand-in host and sparked backlash after previously presenting the show.

“I have all the fun and very little of the responsibility or flak,” he told The Metro.

“I remember when I started sitting in for Piers on Good Morning Britain, I’d have a look at Twitter after I’d done a programme and, yes, you get some nice comments but you also get horrendous abuse and, from time to time, death threats.”

On whether the abuse affected him, he added: “I personally couldn’t give a f***,” but acknowledged how trolls could affect younger presenters.

On replacing Piers, he told The Sun: “The phone hasn’t rung, I haven’t had a ping into my inbox.

“The bookies have me down as the front-runner and there have been opinion polls where I’ve come out reasonably well, but there’s a huge difference between that and it being a reality.”

Piers left the show in March after sparking over 57,000 Ofcom complaints following comments he made about Meghan Markle.

The latter opened up about her life in the Royal Family with Oprah Winfrey in what was described as a “bombshell interview”.

During their chat, the Duchess of Sussex, married to Prince Harry, said she felt suicidal and alleged that an unnamed family member had concerns about the colour of their son Archie’s skin.

Piers said he didn’t believe a word she said, when the team discussed it live on air.

Following his exit, he said he had to “agree to disagree” with ITV about his departure and said he stood by his comments.

Good Morning Britain airs weekdays from 6am on ITV.