Revealed: The story of the silk and gold clad woman buried in London’s Spitalfields 1,600 years ago 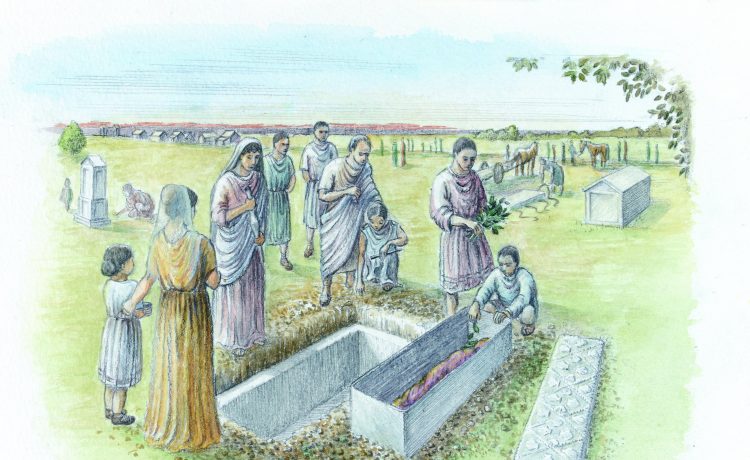 fter 21 years of research, archaeologists have succeeded in piecing together the extraordinary story of an ultra-high-status Roman aristocrat who was buried in London, more than 16 centuries ago.

The remarkable evidence, published today, suggests that she may well have been a member of the senatorial elite which presided over the final years of Roman Britain.

“It’s conceivable that she was the wife of one of Britain’s last Roman rulers,” said Dr Roger Tomlin, a leading authority on Roman Britain and author of a major study on its people and social history, Britannia Romana.

Her burial, in Spitalfields on the northern edge of the city, is arguably the most high status late Roman grave ever found in Britain.

Scientific research has revealed that she was buried wearing a beautiful garment made of Chinese-originating silk and 97 per cent pure gold thread.

What’s more, her funerary apparel featured at least one band of woollen textile, which appears to have been dyed purple.  Purple was the colour normally associated with imperial or aristocratic status – and experts believe that the dye used to adorn her garment was probably the most expensive in the whole of the ancient world, most likely coming from an eastern Mediterranean species of sea snail, used to produce the dye for imperial and senatorial togas.

Additionally, isotopic research on her teeth show that she was brought up in Rome itself.

Buried in a pure lead coffin inside a large stone sarcophagus, she made her journey to the next world equipped with the very finest of grave goods.

They included at least two continental-made glass perfume vessels: a 41cm tall, 2.5 to 5.5cm diameter biconical container made of very thin 1mm thick colourless glass – and a roughly 25cm tall, 3cm diameter beautifully patterned cylindrical colourless glass vessel, the like of which has never been found before anywhere in the territories covered by the Roman Empire.

Both vessels probably held perfumed oils – and the latter one was equipped with a unique 24cm long dip stick made of the semiprecious stone, jet (quarried in what is now the Whitby area of Yorkshire).

The investigation also revealed that, in her grave, her head rested on a pillow filled with bay leaves, almost certainly imported from the Mediterranean area. Scientific tests also showed that pine and pistachio tree resin had been used to freshen the air in her coffin.

“Her presence in the Spitalfields cemetery shows that, even towards the end of Roman Britain, London was fully integrated into high status economic and political networks,” said Michael Marshall, a specialist in Roman archaeology at Museum of London Archaeology (MOLA), the organisation which investigated the Spitalfields discovery.

“Her grave goods demonstrate the ways in which a highly mobile social elite were capable of displaying their power and sophistication,” he said.

The 215 page full-colour report on the decades long investigation into the cemetery, and the skeletons and grave goods found in it, is being published today by MOLA.

However, one of the big remaining enigmas is the identity of the ultra-high status Spitalfields lady herself.

There is no inscription on the sarcophagus or associated with the grave – and it’s likely that her gravestone was looted many centuries later to help construct medieval London or even to build the medieval metropolis’ city walls.

But the archaeological evidence may be sufficient to allow historians to explore a number of options as to who she was.

The ultra-high status nature of her funerary clothing, the probable purple dye, her stone sarcophagus, her grave goods and the fact that she was brought up in Rome, all suggest that her family was probably of senatorial or equestrian rank.

Her grave is by far the most high status ever found in Roman Londinium.

In late Roman London, there would have been only a very limited number of individuals of that sort of background.

It is therefore conceivable that she was either the wife of a governor of Flavia Caesariensis (the British province covering what is now the English Midlands, East Anglia, and southern England, north of the Thames) or, possibly, that she was the wife of one of the overall bosses of late Roman Britain (a so-called vicarius Britanniarum – Britain’s imperial “viceroy”).

The style of her grave goods and other evidence reveals that she almost certainly died in the four or five decades after around AD360.

Of the dozen relevant vicarii, who ruled Britain in that period, the names of only four of them have survived. What’s more, hardly any names of the wives of mid-to-late fourth century Roman rulers in Britain are known.

One, a lady called Namia Pudentilla, illustrates the sort of women Britain’s Roman governors and vicarii married. Namia”s husband, Flavius Sanctus, married a noble woman from a senatorial family. He was a governor in Britain in the mid-fourth century.

Archaeologists and historians are now able to piece together the life story of the Spitalfields lady.

She was probably born (and certainly brought up in) Rome in the mid-fourth century.

When she was four or five years old, she suffered a brief (but potentially serious) illness which temporarily stopped her tooth enamel growing (a fact that has been spotted by the archaeological investigators).

It’s  likely that her potentially very high-ranking fiance married her when she was in her mid-to-late teens and he would probably have been up to twice her age. She then appears to have accompanied him to London (probably because he had been appointed to a high government position there – potentially as a governor or as Britain’s vicarius).

However, probably within two or three years of arriving in the Romano-British capital, she died – most likely in childbirth (or from some then common disease like tuberculosis, typhoid, cholera or scarlet fever).

It’s possible that her death took place in the final quarter of the fourth century or conceivably even in the first decade of the fifth.

That was a pivotal period in the history of Britain, as it represents the run-up to the end of Roman rule in Britain in AD410. Roman government collapsed in Britain several generations before similar collapses occurred in continental western Europe and that chronological difference in turn helped to shape subsequent British and English history in ways that were very different to those that operated on the continent.

Among the governors and other political players who could conceivably have been the Spitalfields lady’s husband are:

– Alypius of Antioch, vicarius of Britain from around 361 to 363. He was involved in a temporary re-paganisation of the Empire

– Civilis, vicarius of Britain in around 369, who temporarily cleared Britain of barbarian invaders

– Chrysanthus a vicarius of Britain, who had been a Roman governor in Italy before being posted to London

– Victorinus, the vicarius of Britain who may well have been the very last conventionally appointed Roman ruler of Britain.

Another possible candidate for being the Spitalfields lady’s husband could conceivably be one of the four individuals in Britain who declared themselves Emperor during the chaotic years between AD383 and 407.