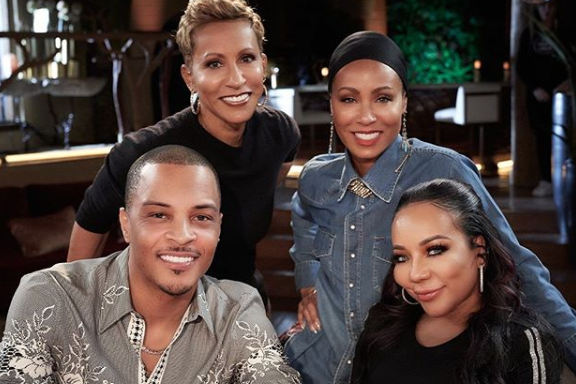 The programme – which airs exclusively on Facebook Watch – also stars Jada’s mother Adrienne Banfield-Norris and daughter Willow Smith and this week, rapper T.I finally broke his silence after hitting headlines for saying he attends his teenage daughter’s gynecologist appointments to “check her hymen.”

While some fans might be new to the red table, the talk show first premiered back in June 2018 and the second season began in May of this year.

The 22nd episode, which aired in March, solidified the significance of Jada’s hosting and interview style.

In it, she effectively managed some major damage-control for Kylie Jenner’s former best friend Jordyn Woods, who had spent over a week in silence after being accused of breaking up Khloe Kardashian’s home.

The tell-all interview attracted 7.6 million views globally in the first 24 hours and TI’s episode broke the 3 million mark in its first day.

But what else do Jada, Willow and Adrienne – aka Gammy – have to offer?

The trio have so far released a total of 37 episodes that consist of life lessons, celebrity interviews and sessions of reflection.

If you’re looking for tips on which ones to watch next, here are 12 of our favourite instalments..

In the series premiere of Red Table Talk, viewed 31 million times, Jada is joined by husband Will Smith’s ex-wife, Sheree Elizabeth Zampino for an intimate conversation around their blended family.

Jada discusses everything from losing her virginity to embracing abstinence and her addiction to sex toys.

Willow also speaks openly about how she first learned about sex and the time she overheard her parents doing the deed, while Adrienne explains how her introduction to sex created shame in her life.

To the delight of fans, Will finally joined the show and the emotional episode saw him and Jada open up about their marriage, moments of crisis and the first time they met.

Jada, Adrienne and Willow sat down with R. Kelly accuser Lisa Vanallen, as she shared details of her alleged decade-long ordeal with the R&B singer.

In part 2, Vanallen’s teenage daughter Akeyla spoke publicly for the first time about her mom’s alleged 10-year abusive relationship with Kelly (which he has denied).

Renowned psychologist  Dr. Candice Norcott also appeared to discuss how abusers manipulate their victims and convince them to stay in the relationship.

Episode 27: A Conversation With Jordyn Woods

As mentioned, Jordyn stopped by the Red Table for an emotional interview about the public scandal involving Thompson, the father of Khloe Kardashian’s daughter.

She addressed the rumours, told her side of the story and talked about the accusations in one of the most iconic interviews.

Ciara came to the Red Table and revealed how she turned her “scars” into “beauty marks”.

She talked about her journey from pain and mistrust – after dating rapper Future –  to her loving marriage to NFL star Russell Wilson.

After years of success as a rapper and actor, Common found himself stuck in a cycle of failed relationships – both romantic and familial.

He used the opportunity to discuss his book Let Love Have The Last Word and shared how he finally broke through the destructive cycles.

Jada, Willow and Gammy sat down with Angela Tucker, a black woman who was raised by white parents, to discuss the struggles of transracial adoptees.

The episode has been discussed and debated heavily on social media.

Where do you fall on the narcissism scale? This was the jaw-dropping, yet reflective, question asked during this episode.

Renowned psychologist Dr. Ramani Durvasula joined Jada, Willow and Gammy for a revealing discussion about self-obsession and explained how to both identify and manage the narcissists in your life.

There were many moments which left Gammy, Willow and Jada with their mouths wide open in shock, as they learnt more about their psychological well-being.

Episode 17: Demi Moore and Her Daughters

For the first time, Demi Moore and daughters Rumer & Tallulah Willis opened the doors to the world to overhear a very personal conversation.

They shared intimate details about Demi’s best-selling memoir Inside Out, the difficulties of their traumatic mother-daughter relationship, Demi’s life-threatening addiction, as well as the men in her life and why their family didn’t speak for three years.