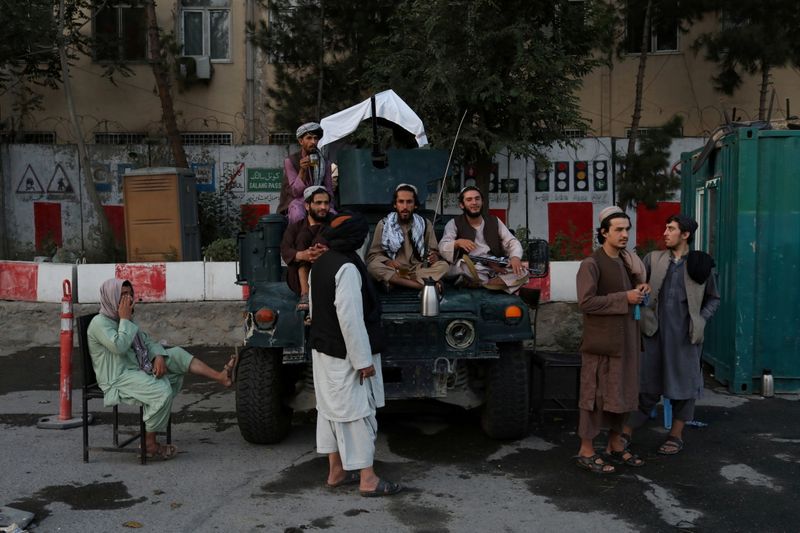 © Reuters. Taliban soldiers are seen at one of the main city squares of Kabul, Afghanistan, September 1, 2021. WANA (West Asia News Agency) via REUTERS

(Reuters) -Taliban forces and fighters loyal to local leader Ahmad Massoud battled in Afghanistan’s Panjshir Valley on Thursday, more than two weeks after the Islamist militia seized power, as Taliban leaders in the capital, Kabul, worked to form a government.

Panjshir is the last province resisting rule by the Taliban, who retook control of the country as U.S. and foreign troops withdrew after 20 years of conflict following the Sept. 11, 2001, attacks on the United States.

Each side said it had inflicted heavy casualties.

Taliban fighters had entered Panjshir and taken control of some territory, he said. “They (the enemy) suffered heavy losses.”

A spokesman for the National Resistance Front of Afghanistan (NRFA) rebel grouping said it had full control of all passes and entrances and had driven back efforts to take Shotul district.

“The enemy made multiple attempts to enter Shotul from Jabul-Saraj, and failed each time,” he said, referring to a town in neighbouring Parwan province.

Since the Taliban swept into Kabul on Aug. 15, several thousand fighters from local militias and remnants of the government’s armed forces have massed in Panjshir under the leadership of Massoud https://www.reuters.com/world/asia-pacific/son-slain-afghan-hero-massoud-vows-resistance-seeks-support-2021-08-19, son of a former Mujahideen commander.

They have been holding out in the steep valley where attacks from outside are difficult.

Efforts to negotiate a settlement appear to have broken down, with each side blaming the other for the failure.

Mujahid said the announcement of a new government was a few days away, while Taliban official Ahmadullah Muttaqi said a ceremony was being organised at the presidential palace.

The legitimacy of the government in the eyes of international donors and investors will be crucial for the economy as the country battles drought and the ravages of a conflict that killed an estimated 240,000 Afghans.

Humanitarian organisations have warned of impending catastrophe and the economy – reliant for years on many millions of dollars of foreign aid – is close to collapse.

Many Afghans were struggling to feed their families amid severe drought well before the Taliban militants seized power and millions may now face starvation with the country isolated and the economy unravelling, aid agencies say.

“Since the 15th of August, we have seen the crisis accelerate and magnify with the imminent economic collapse that is coming this country’s way,” Mary-Ellen McGroarty https://www.reuters.com/world/asia-pacific/drought-leaves-afghans-hungry-economic-collapse-looms-un-2021-09-02, World Food Programme country director in Afghanistan, told Reuters from Kabul.

In a positive development, a senior executive of Western Union Co said it was resuming money-transfer services to Afghanistan – a decision he said was in line with a U.S. push to allow humanitarian activity to continue there.

“Much of our business involving Afghanistan is low-value family and support remittances that support basic needs of the people there, so that’s the grounding that we have and why we want to reopen our business,” said Jean Claude Farah, Western Union’s president in Asia, Europe, the Middle East and Africa.

The Taliban enforced a radical form of sharia, or Islamic law, when it ruled from 1996-2001 but have tried to present a more moderate face to the world this time, promising to protect human rights and refrain from reprisals against old enemies.

The United States, the European Union and others have cast doubt on such assurances, saying formal recognition of the new government – and the economic aid that would flow from that – is contingent on action.

German Foreign Minister Heiko Maas said on Thursday that Germany was ready to resume a diplomatic presence in Kabul if the Taliban met certain conditions.

“We want to see an inclusive government (in Kabul), the respect for fundamental human and women’s rights – and Afghanistan must not again become a breeding ground for international terrorism,” Maas told reporters in Slovenia, where he met his EU counterparts to discuss Afghanistan.

A source with direct knowledge of the move said Afghan diplomats had been asked to stay in overseas posts for the time being. The Taliban wanted to maintain a sense of continuity, the source said.

The Taliban have promised safe passage out of the country for any foreigners or Afghans left behind by the huge airlift that ended when U.S. troops withdrew on Monday. But with Kabul airport still closed, many were seeking to flee over land.

Thousands of Afghans https://www.reuters.com/world/asia-pacific/evacuated-afghans-hoping-resettle-us-face-extended-limbo-third-countries-2021-09-02 – some with no documentation or pending U.S. visa applications, others in families with mixed immigration statuses – are also waiting in “transit hubs” in third countries following the chaotic scramble to evacuate.