During the third day of the Wagatha Christie trial, Vardy, 40, was cross-examined by Rooney’s lawyer David Sherborne QC who read out a text exchange which saw Coleen confide in her about the leaks

Rebekah Vardy consoled Coleen Rooney as the WAG shared her heartache after discovering someone had been leaking stories taken from her personal Instagram to the media, the court heard on Thursday.

During the third day of the Wagatha Christie trial, Vardy, 40, was cross-examined by Rooney’s lawyer David Sherborne QC who read out a text exchange between the pair.

The High Court heard how Coleen had turned to Rebekah for comfort as she told her someone was sharing her stories with the press.

Mr Sherborne said after Rooney revealed her anguish at the leaks, Vardy messaged her saying: “That’s so bad. I would be chomping if it was me. Not on at all.

“You don’t think the paper has hacked your account do you?”

Sherborne asked: “That is totally disingenuous, isn’t it?”

Sherborne claimed Vardy knew she and her agent Caroline Watt had been the source of the leaks and she was trying to divert suspicion away from her.

Rebekah, who is married to Leicester City striker Jamie Vardy, denies leaking stories to the media and is suing her fellow footballer’s wife for libel, while Mrs Rooney is defending the claim on the basis her post was “substantially true”.

In a viral social media post in October 2019, Coleen, said she had carried out a “sting operation” and accused Mrs Vardy, 40, of leaking “false stories” about her private life to the press.

Mrs Rooney is defending the libel claim on the basis of truth and public interest.

The court previously heard that both women have spent “hundreds of thousands of pounds” on the case so far, with the total costs of the case expected to be at least £2 million.

The libel battle comes after Mrs Rooney publicly claimed an account behind three fake stories she had posted on her personal Instagram account with The Sun newspaper was Mrs Vardy’s.

Rebekah, who is married to Leicester City striker Jamie Vardy, denies leaking stories to the media
(

The fake stories Mrs Rooney planted on her Instagram during the sting operation featured her travelling to Mexico for a “gender selection” procedure, her planning to return to TV, and the basement flooding at her home. 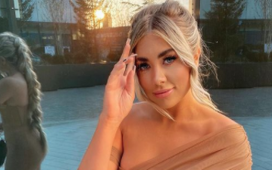