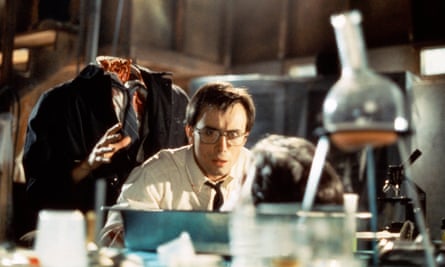 Stuart Gordon, the film-maker who shot to prominence with the mid-80s cult horror film Re-Animator before co-creating the Honey, I Shrunk the Kids series, has died aged 72. His family confirmed the news to Variety magazine; the cause was not released.

Gordon, who was born and grew up in Chicago, began producing radical theatre shows as a student, setting up a company in 1968 called Screw Theater. He staged an anti-war adaptation of Peter Pan (inspired by the Democratic convention riots of that year) which got him and his then girlfriend (and later wife) Carolyn Purdy arrested for obscenity; the case received national attention but the charges were later dropped. He then set up shop as the Organic Theater – described as a “take-off-your-clothes, scream and bleed theater” – which he ran for 16 years: among its successes was the Gordon-directed premiere production of David Mamet’s Sexual Perversity in Chicago in 1974.

Gordon moved into film in the mid-80s, and Re-Animator was his directorial debut: adapting HP Lovecraft’s short-story series, Gordon planned first to create a stage play, then a TV show, before getting backing from producer Brian Yuzna for a feature film. Released in 1985, its mix of gruesome, bloodsoaked special effects (reputedly inspired by photographs of corpses from the Cook County morgue) and savage humour, made it a cult hit, and a key part of the mid-80s comedy-horror wave that included The Evil Dead and The Toxic Avenger.

Gordon’s horror-movie follow-ups – From Beyond and Dolls – were less successful, but he got the chance to pitch a film to Disney, then at a low ebb financially and creatively. Gordon was due to direct the result – then called Teeny Weenies – but dropped out after being diagnosed with hypertension. The resulting film, renamed Honey, I Shrunk the Kids, became a big earner for Disney and led to a series of sequels and a TV show.

However, Gordon’s directing career failed to ignite and he returned to sci-fi and horror films, making battling-robot pic Robot Jox (1990), futuristic-prison yarn Fortress (1992) and comedy Space Truckers (1996). In 2003 he adapted Charlie Higson’s noir novel King of the Ants and collaborated again with Mamet on a film version of Edmond (2005). His final directorial credit was Stuck (2009), another comedy horror with Stephen Rea as a hobo wedged in nurse Mena Suvari’s car windscreen.

In 2011, Gordon turned Re-Animator into a successful stage musical, with music and lyrics by Mark Nutter, and featuring copious fake blood in the “splash zone” – the first few rows of the auditorium.

Gordon and Purdy married in 1968, with Purdy regularly appearing in his films – notable for her characters’ frequently spectacular death scenes.