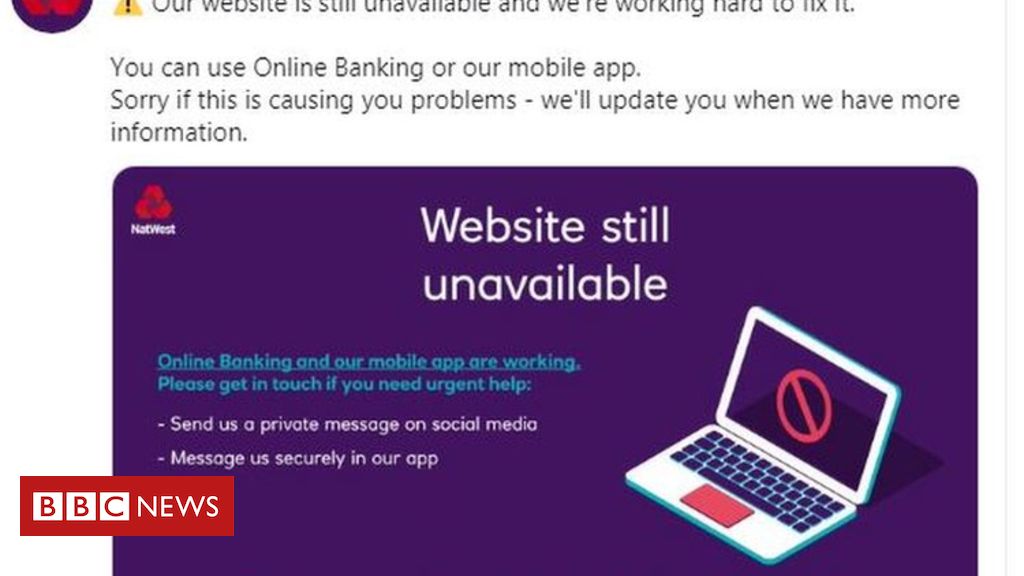 RBS and NatWest’s websites have been down for nearly seven hours but the problems are being resolved.

The sites stopped working at around 09:00 BST, but shortly before 16:00 BST a spokeswoman said the RBS site was back up and running again.

At 15:00 BST, the NatWest Help Twitter account had told a customer the bank did not know when the problem would be resolved.

Both banks tweeted that customers could use other methods to access accounts.

An RBS spokesperson told the BBC: “We are aware of the problem and are working hard to fix it.”

The spokesperson added: “We are aware that customers are currently experiencing issues accessing our websites and online banking login pages. We apologise for the inconvenience caused.

“Customers can still access online banking via direct links, they can use their mobile app, ATMs, telephone banking, or visit their local branch.”

Some people complained that despite this, they were still unable to complete transactions, with one tweeting NatWest to say: “It’s like the money is disappearing.”

After 14:00 BST, some customers did tweet to say they had successfully logged in, but they were in a minority as the problems appeared to be continuing.

NatWest is part of the RBS group and it is not the first time that both banks’ websites have gone down.

Figures published last week showed that they were the banks with the most problems in the past three months, although Barclays has had the most in the past year.

Barclays reported 33 incidents in the 12 months to the end of June this year, higher than NatWest which had 25 and Lloyds Bank, which had 23.

Have you been affected by RBS and NatWest’s website issues? Please share your experiences by emailing haveyoursay@bbc.co.uk.