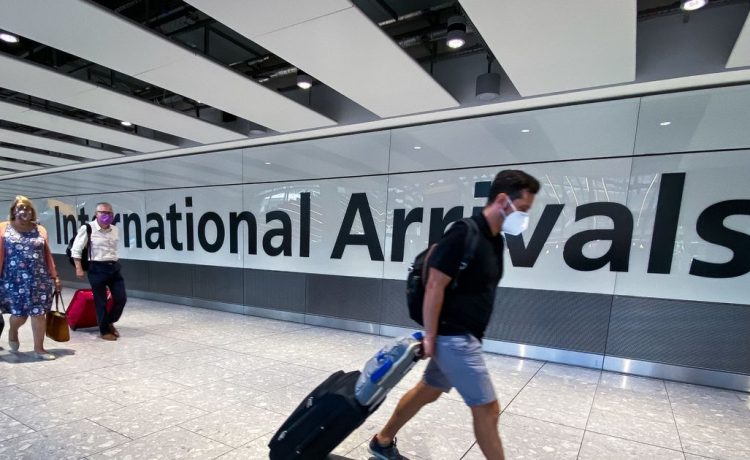 All passengers arriving in the UK may have to undergo a rapid Covid test under plans to allow holidays abroad this summer, according to a report.

The Government is said to be considering a “three-tier” warning system as part of a bid to get international travel back on the cards.

Under this system, countries would be divided into green, amber and red groups with those in the first category only required to take a lateral flow test.

The 15-minute tests, costing £30 which would be footed by the traveller, would likely to be taken at the airport.

Arrivals from amber countries might be required to take PCR tests within a certain amount of time prior to travel.

But hotel quarantine will continue for all red list nations, the Sun reports.

Vaccines passports or recent tests are still likely to be required for most destinations abroad, with Virgin Atlantic becoming the latest airline to announce a trial.

The Government’s Global Travel Taskforce is due to meet again from April 12 to look at the global picture and how international travel can be made possible.

Decisions now hinge on whether any vaccine-busting new variants of the bug emerge and the speed of rollouts, rather than simple infection rates.

Paul Charles, chief executive of The PC Agency travel consultancy who has been at the forefront of the campaign to get summer holidays going again told The Sun: “It is encouraging to see there will be a traffic light system in place to get travel going again on May 17.

READ  Grimsby was a brick in Labour's 'Red Wall' for 74 years- what went wrong?

“It will be important to give clarity to the consumer and ensure there is enough of a notice period before any destination is switched.

“We don’t want to see the distressing scenes that we saw last summer, caused by popular destinations coming off a list at the 11th hour.”

The Department for Transport has not denied the reported plans, but has repeated Boris John’s previous comments about the need to open international airlines as soon as possible.

Despite this, the PM has warned that travel abroad “absolutely cannot be at the cost of our vaccine rollout”.

Brits are due to learn more about whether they can head for sunnier shores this year on April 5, a week before the taskforce sits.

Spain, Greece and Portugal are in ongoing talks with the UK about how to make travel possible in time for summer.

The European Union recently made plans to fast track a “digital green pass” which be similar to a vaccine passport.

Ministers are also said to be in the process of striking agreements with the US and Israel thanks to the speed of their vaccine rollout.