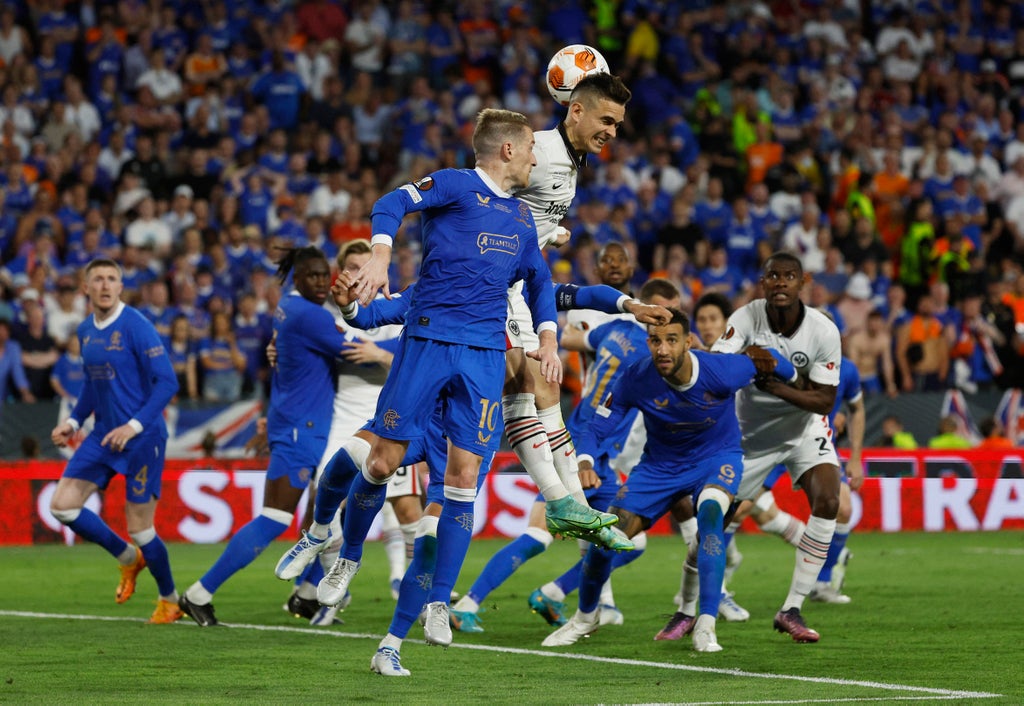 Follow live build-up and updates from the Europa League final in Seville as Rangers face Eintracht Frankfurt at the Ramon Sanchez Pizjuan stadium. Supporters from both teams have flocked to the south of Spain and over 150,000 fans have arrived in the city ahead of tonight’s match, in what is perhaps the most unexpected European final in a decade.

It is simply an unmissable occasion, and both Rangers and Eintracht have the chance to create history after making dream runs to the final. Rangers are aiming to win their first European trophy in 50 years and will believe they have nothing to fear after knocking out German opposition in Borussia Dortmund and RB Leipzig to reach this stage. Giovanni van Bronckhorst only took over at the Ibrox in November but has built on the foundations set by Steven Gerrard to take the Glasgow club to unexpected heights.

Eintracht Frankfurt may have finished in the bottom half of the Bundesliga table this season but they too have punched above their weight by knocking out Barcelona and West Ham to reach their first European final in 42 years, and cannot be taken lightly. The weather conditions could play a factor in the final, which is expected to take place in baking temperatures after a day of searing heat in Seville. Can Rangers handle it? Follow live updates from the Europa League final, below:

100 mins: You wonder at what point both teams will take their chances with the dreaded penalty kicks. The tempo has undoubtedly gone out of the game.

Kent tries to inject some pace back into the match as he burns past Toure down the left but his cross is cleared. Frankfurt then attempt to break through Knauff but Bassey is back there to put him off balance as his shot is well wide.

98 mins: Rangers are managing extra time well so far. The pace has dropped and that will suit Giovanni van Bronckhorst’s men.

Still no Aaron Ramsey, incidentally. Will we see the former Arsenal and Juventus man at some stage?

96 mins: What a challenge from Bassey!

It’s the Rangers defender who makes the error in the first place as he slips and allows Borre in on goal. But Bassey doesn’t give up on it and as the Frankfurt forward prepares to pull the trigger Bassey slides in to take the ball away from him.

Superb defending. Spared his own blushes.

95 mins: Not far away from Scott Arfield. Sakala bursts into the final third and lays it off to the fellow Rangers substitute. He takes a touch to compose himself and tries his luck from 25 yards out, sending the ball a couple of yards over the top.

You can almost feel the tension in the stadium.

93 mins: Toure fires a ball against Kent and then back off his own leg for a Rangers throw as the tired passing already shows at the start of extra time.

Frankfurt win the ball back and Hauge does well down the left to force a corner off Lundstram. Set-pieces could be crucial in this 30 minutes.

Rangers get this one clear.

SUB! Scott Arfield is on for Glen Kamara at the start of extra time. I never thought I’d see the day when ex-Burnley midfielder Scott Arfield was playing in a European final.

Full-time: That’s the final act of the 90. We are going to extra time in the 2022 Europa League final.

90+5 mins: Rangers have another throw-in. Barisic and Kent work it down the left and Barisic sends in a cross which Knauff hacks away.

Rangers finishing the game strongly but Frankfurt break! Kamada runs it clear and tries to find Kostic on the left who is in a footrace with Goldston. The Rangers centre-back gets there first to smash it away and Kostic leaves one on him for good measure.

90+3 mins: Borre earns a foul from Bassey to stop the Rangers momentum in these final stages of the match.

It does look as though we may well get extra-time. I dread to think how tired these players will be after another 30 minutes.

90+1 mins: Lovely interchange from Kamara and Aribo but Kamara’s shot is blocked. it flies out to Barisic whose cross is blocked and Rangers have a throw.

The Scots sense a late goal.